In the third chapter of Nedarim we have a statement from a Tanna named Rabbi Eliezer ben Yaakov about taking a vow and then rendering it void (Nedarim 23a). What do we know about this sage and can we place him in time and space?

Rabbi Eliezer ben Yaakov’s name is prominent in statements about the Temple and in fact the entire tractate of Middot, all about Temple measurements and places, is ascribed to him:

“Rav Huna said: Who is the tanna who taught the mishnayot in tractate Middot? It is Rabbi Eliezer ben Yaakov,” (Yoma 16a)

In Rabbi Eliezer ben Yaakov’s testimonies in Middot he admits twice that he forgot details about the Temple, something that makes his other statements more believable. His most piquant testimony is about an uncle of his who had the misfortune to fall asleep while on watch:

“The officer of the Temple Mount used to go round to every watch, with lighted torches before him, and if any watcher did not rise [at his approach] and say to him, “Shalom to you, officer of the Temple Mount,” it was obvious that he was asleep. Then he used to beat him with his rod. And he had permission to burn his clothes. And the others would say: What is the noise in the courtyard? It is the cry of a Levite who is being beaten and whose clothes are being burned, because he was asleep at his watch. Rabbi Eliezer ben Yaakov said: once they found my mother’s brother asleep, and they burnt his clothes.” (Mishnah Middot 1:2)

From this connection to the Temple, it would seem that Rabbi Eliezer ben Yaakov is from the second generation of Tannaim, alongside such great Sages as Rabban Yochanan ben Zakkai and Rabban Gamliel. He saw the Temple while it was standing and recalled its glory after the destruction. We even have a testimony about Rabbi Eliezer ben Yaakov that was found in an old scroll in Jerusalem:

“It is taught in a baraita that Rabbi Shimon ben Azzai said: I found a scroll recording people’s lineages, in Jerusalem. . . it was also written in it: The teachings of Rabbi Eliezer ben Yaakov measure only a kav but are clean and accurate, (משנת רבי אליעזר בן יעקב קב ונקי)” (Yevamot 49b)

We will return to this statement of kav venaki, a small amount but accurate, later. But we have a problem – alongside the statements about Rabbi Eliezer ben Yakkov in the time of the Temple, we also hear about Rabbi Eliezer ben Yaakov two generations later in the time of Usha. The midrash in Bereshit Rabba lists Rabbi Eliezer ben Yaakov as one of the later students of Rabbi Akiva, with colleagues such as Rabbi Meir, Rabbi Yosi and Rabbi Shimon bar Yohai (Bereshit Rabba 61.3) He appears in this same company in the story about the gathering of Sages in Usha after the disaster of the Bar Kokhba Revolt:

Based on this difference in time periods, it seems likely that there were two sages named Eliezer ben Yaakov, one in the second generation of Tannaim (late first century CE) and one in the fourth (mid 2nd century CE). How can we know which is which? We cannot always know. If the conversation is about the Temple, chances are good that it is Rabbi Eliezer #1. If he is arguing with people like Rabbi Meir or Rabbi Yehuda bar Ilai, chances are that it is Rabbi Eliezer #2. But sometimes it is unclear, like in our Mishnah.

“This is as it is taught in a baraita that Isi ben Yehuda would recount the praise of the Sages: Rabbi Meir, a scholar and scribe; . .  the mishna of Rabbi Eliezer ben Yaakov is measured [kav] and immaculate; . .” (Gittin 67a)

Isi ben Yehuda is describing his contemporaries, all men of the fourth generation. Did the redactors of the Gemara get confused about which Eliezer was which? Or did they share certain traits? The confusion continues when it comes to final resting places. In the upper Galilee, near Kfar Hanania (not far from Tzfat) are a group of graves. Among them are Rabbi Eliezer ben Yaakov and Rabbi Zechariah haKatzav. One inscription reads “Rabbi Eliezer Kav veNaki.” As we know, both Eliezers were described that way so the marker does not help us. Rabbi Eliezer’s neighbor at this site, Rabbi Zechariah haKatzav, lived in the time of the Temple so perhaps it is the earlier Rabbi Eliezer. However, he lived in Jerusalem and then probably in Yavneh or Lod, far from the Galilee. The second Rabbi Eliezer on the other hand, probably lived in the north, near the seat of the Sanhedrin in Usha, so this location for his grave seems plausible. 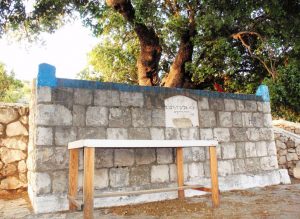 Even if we cannot always know which Eliezer is which, we have a beautiful story about one of them: