The Glory That Was Rome

“And it once was that Rabban Gamliel, Rabbi Elazar ben Azarya, Rabbi Yehoshua, and Rabbi Akiva were walking along the road and they heard the sound of the multitudes of Rome from Puteoli at a distance of one hundred and twenty mil. And the other Sages began weeping and Rabbi Akiva was laughing. They said to him: For what reason are you laughing? Rabbi Akiva said to them: And you, for what reason are you weeping? They said to him: These gentiles, who bow to false gods and burn incense to idols, dwell securely and tranquilly, and for us, the House of the footstool of our God, the Temple, is burnt by fire, and shall we not weep? Rabbi Akiva said to them: That is why I am laughing. If for those who violate His will, it is so for those who perform His will, all the more so will they be rewarded.” (Makkot 24)

This week’s flashback is not about a specific daf that we will learn in Nedarim, but it is pertinent to so many pages and descriptions throughout Rabbinic literature. Having just returned from my first visit to Rome I can easily understand the outsized place it occupied in the Rabbinic imagination. The scale and number of the monuments is so incredible, from the massive Colosseum to the towering victory arches and columns, and of course the temples, theaters and hippodromes. If a modern person, accustomed to seeing skyscrapers and technology, can be overwhelmed by the sights, imagine an ancient visitor.

In the first century CE much of Rome burned in a great fire. The subsequent rebuilding took place in the years that the Great Revolt was going on in Judea as well as when the war was over. Among the most important monuments in the city were the Colosseum, financed by Jewish gold from the Temple and probably built by Jewish prisoners of war, and Vespasian’s Temple of Peace, built to house the spoils from Jerusalem, including the Temple menorah. At the peak of the Via Sacra, the sacred way, a huge victory arch, the Arch of Titus,  was built, with a relief of Roman soldiers carrying the menorah and other Temple goods. 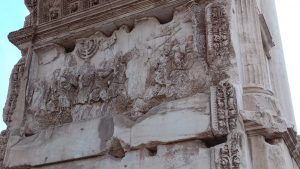 Imagine that you are a Jewish captive, or a member of the Roman Jewish community or a visitor like the rabbis in the quote at the beginning of this article. What are your emotions when faced with this glory and grandeur, all of it in service to gods and values that are completely opposed to your own? Is it any wonder that the rabbis began to weep? This idea of the power of Rome and how it cannot coexist with Jerusalem and her values, is expressed repeatedly in Rabbinic literature:

With this background it is easy to understand how seductive the power of Rome was, especially to the downtrodden Jews. When someone like Elisha ben Avuya, Rabbi Akiva’s contemporary, joins the Roman side despite his Torah knowledge, it is because he cannot envision a world where such wealth and power cannot have some justification. The resistance of so many Jews  to Rome is much harder to fathom. But as we walked through the city, seeing monument after monument, a verse kept going through my head: שקר החך והבל היופי, King Solomon’s warning in the book of Proverbs: grace is deceptive and beauty is illusory. The rabbis taught over and over that despite Rome’s power, her values are empty and evil. Standing in the Colosseum and hearing about the incredible cruelty done there in the name of entertainment, one cannot help but think of Rabbi Akiva’s injunction in Pirkei Avot that man is beloved by God because he was created in His image, חביב אדם שנברא בצלם.

The rabbis had to fight constantly against the power and glory of Rome. They insisted that human life had value and that Jews were known for their mercy, bashfulness, and kindness (Yevamot 79a). And it seems their efforts were successful. Most Jews held on to their identity, whether in Judea or even in Rome. The Roman Jewish community existed for centuries and we know that they had synagogues and were buried as Jews. Roman Jewish catacombs frequently have menorahs decorating them. 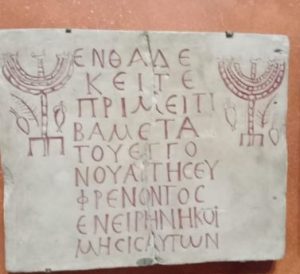 Copies of catacomb inscriptions in Jewish museum in Rome

The battle continued when the Roman empire changed its ways and became Christian. The (seemingly) seamless transition from pagan Rome to Christian Rome can be seen all over Rome today. Places that were monuments and theaters became churches. The most extreme example that I saw was the replacement of the statue of Trajan on top of his eponymous column with a statue of St. Peter! So when the rabbis talk about Edom and use it to mean both Rome and Christianity they are actually reflecting reality.

The Roman Jewish community, as well as Jews all over the world, held fast to their beliefs and values even as the power of Rome shouted from every part of the empire. It is thanks to our ancestors that we can celebrate a thriving and powerful Jewish community today, in the Diaspora and in the State of Israel. Standing in Rome today, and praying in the incredible Great Synagogue in Jewish Rome, surrounded by Italian and Israeli Jews, the balance between Rome and Jerusalem seems to have shifted in our favor. 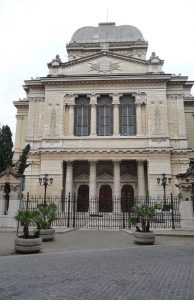