Limited Time Only: Wine and Oil For Your Sacrifice!

April 4, 2021 | כ״ב בניסן תשפ״א / Shulie Mishkin
It’s always exciting when an archaeological find fits in with history and literary sources, completing a familiar narrative. The find below could actually work with two different stories, depending on how it is interpreted.
At the end of 2011, the excavators from the City of David who had been examining the main sewer system below Robinson’s Arch announced a small but momentous discovery. They had found a small stamp, or perhaps a chit, with Hebrew letters on it: 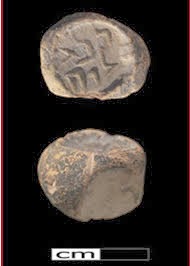 As can clearly be seen, the letters read דכא ליה, not Hebrew but Aramaic. The archaeologists interpreted the words to mean טהור לה’, pure to God, a designation that could apply to many of the items used in the Temple. The oil, wine, meal and other food items all had to be pure if they would be used in the Temple. And since the artifact was found right below the Temple Mount, it stands to reason that it labeled an item used in the sacrifices, or perhaps even the oil of the menora. Chanukah anyone? 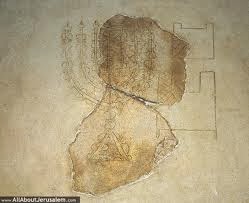 But Professor Shlomo Naeh of Hebrew Universitydisagrees. He cites Shekalim 14b, where we hear about the חותמות (usually translated as seals but here the word seems to mean more of a receipt or a ticket) used as an internal buying system in the Temple. People brought or bought their own sacrifices before they arrived in the Templebut the wine and oil offerings that go with the sacrifices are easily made impure so they were sold on site. The Mishnah explains that you would buy a  חותם specific to your sacrifice: עגל, זכר, גדי, חוטא. You would then take that ticket and bring it to the place where the wine and oil were given out and exchange it for the goods you needed. At the end of the day, the money and the tickets were tallied up to see that all was on the up and up.

But Ben Azzai says that there were five seals and they were in Aramaic: עגל, דכר, גדי, חוטא דל, חוטא עשיר. The Mishnah continues and says that in order to prevent cheating, the seal would also include the day of week, the month and the mishmar of cohanim serving that week so that it could only be used that day.
Which brings us back to our seal. Professor Naeh says that דכא ליה is shorthand for :
דכ(ר) (זכר) א (יום ראשון בשבוע) ליה(ויריב)
A male sacrifice, on Sunday, of the mishmar of the family of Yehoyariv, one of the most important of the priestly families. 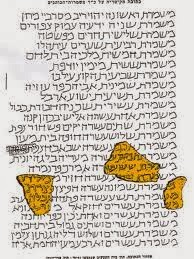 He rejects the idea that it is a seal showing purity because that would need to actually seal the object, not be a freestanding ticket.
If Professor Naeh is correct, one sad worshipper had to pay for another ticket but we have received a rare glimpse behind the scenes of the business side of the Temple.