Imagine living in the bustling late 19th century city of Bagdad, Iraq. The Jewish community, full of traders, is thriving and there are many connections to other metropolises around the world. Now imagine teaching in a synagogue that according to tradition was the Shef VeYativ synagogue, the synagogue founded by King Yehoyachin when he was exiled from Jerusalem in 597 BCE. And imagine teaching Talmud, in that vestige of ancient Babylonia, to modern Jews.

All these deep traditions and contradictions are present in the incredible commentary on the agada by Rabbi Yosef Hayyim, called Ben Yehoyada. Because Hagigah is full of agada, the non-legal parts of the Gemara, it seemed like a good time to explore the fascinating words of the Ben Yehoyada. Rabbi Yosef Hayyim (1834 – 1909) spent much of his life as the unofficial chief rabbi of the Bagdadi Jews. When his father died in 1859, the young Yosef took over as teacher and spiritual leader of the community. He is most famous as a legal scholar and he wrote a book called the Ben Ish Hai which for Jews of the Eastern (Edot HaMizrach) communities is a well known and concise compendium of law. It is often called the Sephardi Kitzur Shulhan Arukh, after a different halachic compilation used by Ashkenazim. 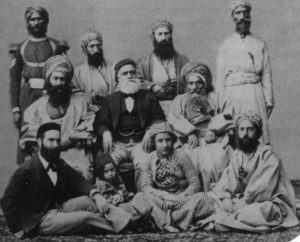 Rabbi Yosef Hayyim was an accomplished halachist as well as a mystic, a scholar of the Kabbalah. But he also needed to reach his community, not all of whom were scholars. For that, he turned to the agada, the stories, sayings and parables of the Gemara. He gave a daily class in the Great Synagogue of Bagdad (the Shef VeYativ mentioned above); half of it was about halacha and the other half was on the Ein Yaakov, a compilation of all the aggadic parts of the Talmud. The Ein Yaakov was put together in the 15th century by Rabbi Yaakov Ibn Habib and proved to be very popular. It was a great way to fulfill your obligation to learn Torah in a lighter way. Rabbi Hayyim gave this daily class for fifty years! Every time they finished the Ein Yaakov, they would start again. He kept notes on his lectures and eventually, in 1898, his book, the Ben Yehoyada, was published in Jerusalem. 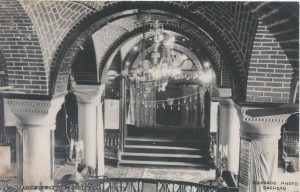 The Great Synagogue in Bagdad (Wikipedia)

Why did he spend so much time on the agada? In a number of places, he explains why it is such an important pathway to Torah. The Gemara in Hagigah 14a describes people who engage in different Torah disciplines and about those who study agada they say: “And every support of water”; these are the masters of agada, who draw people’s hearts like water by means of agada.” The Ben Yehoyada comments on this (my translation):

“Every kind of learning becomes boring after a while because of the effort involved but with agada that draws a person’s heart he is never sick of them but happy and joyful like in the beginning of the learning . . . and that is why they are compared to water (mayim) since the word (in Hebrew) is read the same backwards and forwards (showing that you are as happy when you finish learning as when you began).”

We get a sense here of the Ben Yehoyada’s love of agada as well as his playfulness. In fact, word play and gematria (numerical equivalents to the Hebrew letters) are often part of his commentary. But it would be wrong to dismiss the Ben Yehoyada as a lightweight “fluffy” approach to Gemara. The list of Rabbi Yosef Hayyim’s sources is impressive. From the classical commentaries like Rashi and Tosafot, through the later Ashkenai rabbis like the Maharsha, Rabbi Yonatan Eibeshitz, the Maggid of Dubno and the Vilna Gaon, he knows and quotes them all. Ashkenazim beside Sefardim, Hasidim beside Mitnagdim – Rabbi Hayyim finds merit in all of them. He connects to his Kabbalistic leanings by often quoting the ARI, Rabbi Isaac Luria, and his student Rabbi Hayyim Vital. He sees agada as a way to connect disparate worlds of Torah. In a comment on a famous story in Sotah 40, where Rabbi Abbahu compares himself, a baal agadda, to someone who sells small needles and thread, someone who is always in demand because his wares are simple and cheap, the Ben Yehoyada adds this gloss:

“and this is not to denigrate the agada, but rather is a great praise, since agada contains within it the Pardes (peshat, drash, remez and sod, four ways of studying Torah) and the preacher connects these worlds together like a needle that sews the pieces of cloth and fixes the torn parts . . “ 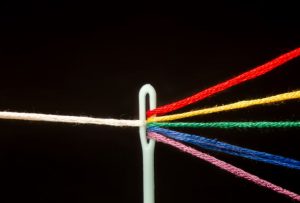 Rabbi Yosef Hayyim was a proud Bagdadi and perhaps more significantly, a proud Babylonian. Living in the same places as his ancestors the Amoraim, eating the food they ate and seeing the landscapes they saw, gave him deep insight into the world of Gemara. He compares customs in the Gemara to customs he has witnessed himself. For example, In Avoda Zara 17a the sage Ulla is described as kissing his sisters on their hands, and some say on their chests. Rabbi Hayyim gives a Kabbalistic explanation and then connects what Ulla did to a local custom:

“We have this custom here in our city Bagdad that the bride on her wedding night, when she leaves her father’s house for her husband’s house, kisses her father and her older brothers on their clothes by the chest, to show that even though she is leaving her father’s house, she wants to still be held in their hearts“

Rabbi Yosef Hayyim loved Bagdad but was also deeply connected to the land of Israel. He visited in 1869 and had a mystical experience on the grave of the Biblical warrior Benayahu ben Yehoyada, leading him to use this name and its permutations for his books (Ben Yehoyada, Benayahu, Ben Ish Hai). He brought back a stone from Jerusalem and placed it in the wall of the Great Synagogue and also brought dirt from Jerusalem to sprinkle on the floor. Rabbi Hayyim died and was buried in Iraq, near the grave of Ezekiel the prophet, but there is a monument for him on the Mount of Olives as well. His works enrich us today, coming from the world of the Babylonian Talmud, updated to modern times. 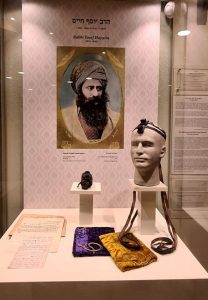 The two sets of tefillin worn by Rabbi Hayyim, in the Babylonian Jewry Museum (Wikipedia)

Much of the information here comes from a wonderful book about the Ben Yehoyada by Michael Gross (in Hebrew).