Our chapter deals with what one is allowed to save from a fire on Shabbat. The idea is that because carrying is prohibited, we cannot really take out possessions on Shabbat but there are certain exceptions. Obviously one may save people, that is pikuach nefesh (and one may even put out a fire if we suspect people may be harmed eventually, through the fire spreading). In a fascinating addition to this idea, the Gemara discusses saving books. Holy books can have the status of people in terms of their importance. Any holy Jewish text that is worn out is not thrown away but rather put in geniza. Its ultimate fate is to be buried in the cemetery. Jews are not just the people of the book because we read them but because we have veneration for them. I once had a teacher who said that if you take out a book and realize you don’t need it (wrong volume of a Chumash for example) don’t just put it back. Look up something, anything. Just as you should not dismiss a person without showing him or her respect, do not dismiss a book. 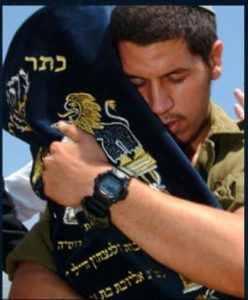 With that ideal in mind, perhaps it will be easier to understand the discussion about which books cannot be saved. If books are so important, then what we neglect, or even more so deliberately leave, makes a strong statement. The rabbis did not allow one to save the books of the minim, the heretics, on Shabbat. This discussion elicits some very fiery statements. Rabbi Tarfon vows to burn all such books and  Rabbi Yishmael advocates burning even God’s name in these books.

Who are the minim? Although there are a number of other opinions, for example that they are believers in Gnosticism, most scholars say that these are early Christians. How do we know that these heretical books were Christian ones? The Gemara was censored at a certain point and derogatory references to Christianity  were expunged but the manuscripts show us what was really said (and today the Steinsaltz Gemara publishes the censored version so check it out there).  The gemara discusses the “gilyonot” and if they should be saved. Normally, a gilyon is an empty piece of parchment. The first part of the daf is clearly referencing that and makes sense. But then it starts to talk about the gilyonot and the books of heretics. What is the connection? Blank parchment does not make so much sense in this context But it does when you read the censored text::

Later there is another censored word: when the philosopher speaks to Ima Shalom (amud bet) he tells her that today the Torah is irrelevant and we must follow the “Avon Gilyon.”

What are these aven gilyon? None other than the “Evangelion,” the Greek word for the Gospels! Rabbi Meir and his colleagues are warning against the danger of reading Christian texts. 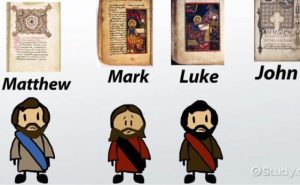 The polemics here are between Jews and Jewish Christians. We are still at an early stage in Christianity where missionizing was mostly aimed at Jews. In Eretz Yisrael, Jews often lived as neighbors with Jewish Christians. A great example of this is the Jewish town of Kfar Nahum, or Capernaum as it is known in English. If you go there today, you can see, side by side, the imposing synagogue of the town and the remains of Peter’s house where tradition held that followers of Jesus gathered to pray (today a massive modern church is built above).  The Jewish community and the Jewish followers of Jesus lived side by side. 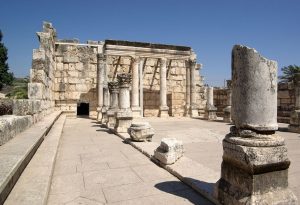 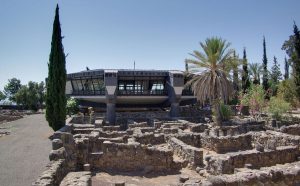 Living in such close proximity meant that the Jews had to be militant in guarding against Christian influences. That is why they create the birkat haminim, the “blessing” on those who are heretics, a section of the amida that is meant to make the minim uncomfortable in a Jewish synagogue.

The Tannaim of our daf: Rabban Gamliel (and Ima Shalom) of the third generation, Rabbis Tarfon and Yishmael of the fourth generation and Rabbi Meir of the fifth generation – are all from the early years of this Jewish-Christian struggle. Later this conflict fades from importance as the two religions separate and become increasingly different. But here we are seeing how this is truly a burning issue in their day.