A Place for Us

The Gemara is often focused on glorifying the Temple in Jerusalem and making it central to Jewish life even after its destruction. However, the rabbis also wanted to acknowledge a pre-Temple reality where there were sacrifices in multiple places. This is what we see from the two mishnayot at the bottom of daf 9 of Megillah:

“the difference between a great altar and a small altar is only with regard to Paschal lambs . . .The difference between the Tabernacle in Shilo and the Temple in Jerusalem is only that in Shiloh one eats offerings of lesser sanctity and also the second tithe, in any place that overlooks Shiloh,” (Megillah 9b)

A great altar במה גדולה refers to places where the Tabernacle altar was housed temporarily, like Nov and Gibeon, while a small altar במה קטנה, refers to a home altar for an individual. Shilo was the site of the Tabernacle for almost four centuries. So we see that other places gained a holy status. Does this fact conflict with the importance of one holy place in Jerusalem?

The Torah is aware of this tension. While the book of Devarim tells us (12:5) that one day we will come to “the place” that God will choose, ‘המקום אשר יבחר ה’ (interestingly no actual site is mentioned), we also get an acknowledgment that first there will be other “places:”

You shall not act at all as we now act here, every man as he pleases, because you have not yet come to the allotted haven that the LORD your God is giving you.” (Devarim 12:8-9)

Before the Temple was built, there were other options of places to sacrifice. In fact, these places are all over the Bible: Abraham, Isaac and Jacob are always building altars and sacrificing on them, the Israelites sacrifice in the desert in multiple places  (albeit in the Tabernacle) and even when they return to the land the place shifts according to where the Tabernacle was set up. Rabbi Yitzchak Levi of Yeshivat Har Etzion suggests that Jerusalem can only become “THE place” after the people of Israel go through a number of stations in their journey. Each stop along the way: Bet El, Hebron, Shilo, Shechem – adds an element to our national identity, until we are ripe for the true place in Jerusalem. 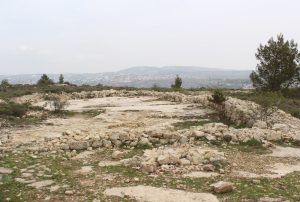 However, all of these holy sites are supposed to become insignificant once the Temple is built in Jerusalem. Just as there is only one God, there can be only one place. But the people did not like that and they wanted to continue worshipping at their local shrines. We see this in the admonitions of the prophets, like Amos, who tell the people to leave these false holy places:

“Do not seek Bethel, Nor go to Gilgal,
Nor cross over. to Beer-sheba;

For Gilgal shall go into exile,
And Bethel shall become a delusion.” (Amos 5:5)

We see it in the massive religious reforms enacted by kings Hezekiah and Josiah, where they rid the country of bamot and temples. And we see it in archaeology, most notably in the temple that was buried in Tel Arad and in the altar that was dismantled in Tel Sheva. 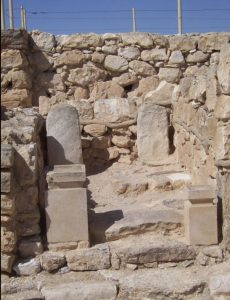 Were these temples meant for idol worship? Perhaps. But it is also likely that the people just had a yearning for a local “place” to serve God. Jerusalem was far away and life was complicated. If a family member was sick, or you needed a job, or just felt a sense of spiritual need, you might not be able to trek to Jerusalem. You wanted that connection with God here and now, in your local community.

The compromise between the monotheistic ideal of one place and the people’s need for many places happened only in Second Temple times. This is when we see the flowering of both the Temple, which becomes larger and more important than ever, and many local synagogues – places where you can serve God in your own community. The reason synagogues were allowed was because they did not attempt to mimic the Temple. Only study, prayer and communal activities could happen there, no sacrifices. This seems to be a great way to satisfy all needs. 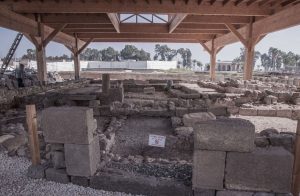 But what if you wanted more, especially if you lived outside of the Land of Israel and getting to the Temple was a complex and costly endeavor? Maybe you could bring the Temple to you? Later in our Gemara (Megillah 29) we hear of  an ancient synagogue in Nehardea in Babylonia called Shef VeYativ. We learn that when the First Temple was destroyed, God’s presence accompanied the Jewish people to this place. A Geonic source (the Letter of Rav Sherira Gaon) goes even further. Rav Sherira says that when the Judeans were exiled with King Yehoyachin in 597 BCE, they brought with them stones from the Temple. They used these stones to build their synagogue, hence its name: Shef -Moved – VeYativ –  and Settled. What an amazing example of a מקדש מעט, a Temple in miniature!

Our Gemara goes even further. Rabbi Yitzchak talks about the Temple of Onias בית חוניו, in Egypt and suggests that after the destruction of the Temple in Jerusalem, sacrifices could be offered there. We know from other sources, both rabbinic and historical (Josephus) about this Temple. It was built in a place called Leontopolis in the Nile Delta, in the second century BCE. Remains of the Jewish community, including their graves, were discovered there by archaeologist Flinders Petrie in the early twentieth century. The Gemara in Menachot (109) goes into a detailed story about why Onias made this Temple but perhaps the most interesting point made there is that the rabbis did not consider it a temple for idolatry but rather a (misguided) place to worship God. This is still problematic since sacrifices are not to be offered outside the Temple, but it shows us that the rabbis understood the motives of Onias and those who visited his Temple. The need for a local site for Diaspora Jews to serve God was great. The Nile Delta had an enormous and prominent community of Jews in Alexandria and perhaps worshipping in their great synagogue was not sufficient for them. They needed sacrifices and Onias’ Temple was able to answer that need.

In a time when international travel and Israel Diaspora relations have again become fraught and complicated, Onias’ Temple is a sadly topical tale.