A Small Town in the Galilee

The fifth chapter of Ketubot goes in a practical direction: what do a wife and husband owe each other in their relationship, how much money is involved, what food is provided and more. In the course of these conversations we also get a sense of how things were done in different places: Babylonia versus the Land of Israel, but also within Eretz Yisrael itself. The difference between the south of Israel near Edom and the rest of the land is referred to in the Mishnah on daf 64b:

“MISHNA: If someone feeds his wife by means of a third party, he may not give her less than two kav of wheat or four kav of barley a week. .Rabbi Yosei said: Only Rabbi Yishmael, who was near Edom, allotted her barley.” (Ketubot 64b)

The Mishnah also tells us about a difference in the weight and quality of thread in Judea and the Galilee:

“And what is the fixed amount that she must earn for him? She must spin wool in the weight of five sela of threads of the warp in Judea, which are equivalent to ten sela according to the measurements of the Galilee,”

We have often been exposed to differences in customs and lifestyle in Judah and the Galilee (https://hadran.org.il/author-post/so-where-are-you-from/). We know that in the time of the Mishnah and the Gemara much of Jewish life moved to the Galilee in the north and there was a vibrant range of communities there.

Ketubot 65 brings us a specific example of a Galilean village, with a statement by a relatively obscure sage:

“Rabbi Yehuda a man from the village of Navoraya, and some say of the village of Nefor Ḥayil, interpreted a verse: From where is it derived that one does not allot wines for a woman?” (Ketubot 65)

Who was Yehudah of Navoraya and where is that town?

The pristine forest of Birya, not far from Tzfat, looks somewhat out of place in Israel, especially if you picture Israel as a desert. A road winds through acres of trees in the largest forest in the north of the country. 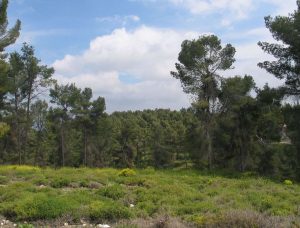 Part of the Biriya forest (Wikipedia)

Within this beautiful scene are some graves and ruins. One of them is a site the Arabs called Navartein which was known in the Middle Ages by Jews as the abandoned Jewish village of Navarta, AKA Navoraya. The site was first excavated by the Geman archaeologists Kohl and Watzinger in the beginning of the twentieth century, as part of their project to find ancient synagogues in the Galilee. It was excavated again in the 1980s by the American archaeologist Eric Meyers. 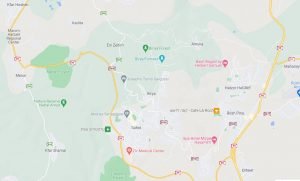 What did these archaeologists find? A small Jewish settlement with the remains of a synagogue, one that had been built and revamped three times. Alongside the synagogue was also a hideout complex, like what we find in Judea from the Bar Kokhba Revolt, indicating that these Jews too took part in the uprising against the Romans in the second century CE.

The synagogue was first built after the Bar Kokhba revolt, in the mid second century. It was small (eleven by nine meters), with a north and a south entrance. It faced Jerusalem and had an elaborate façade as do other synagogues in this region. Around one hundred years after it was built, it was expanded, a fancy lintel with a picture of a menorah was added. We also find other carvings, like a sheep, lions and a rabbit. This lintel may have been part of an elaborate Torah ark: 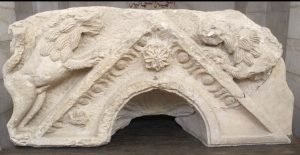 Two earthquakes in the fourth century decimated the synagogue and probably the community. But the Jews returned and a new synagogue was built in the sixth century, at the height of Byzantine rule in the Land of Israel. We actually know precisely when it was built, thanks to this beautiful lintel that includes a date: four hundred and ninety four years from the time of the destruction of the Temple, which translates into 564 CE:

We even have the names of the leaders of the community, Hanina ben Lazer and Luliana bar Yudan. This was clearly a strong, albeit small, and long-lasting community, surrounded by many other Jewish towns in the area, among them Kfar Hananya which was famous for its potters, and Meron, where an ancient synagogue is located.

Meron brings us to the story of graves in this area. From the Middle Ages, Jewish travelers mention graves of Sages buried in the Galilee. Rabbi Shimon bar Yohai in Meron is the most famous but there are many others. Anyone who drives around the area near Tzfat is struck by the number of signs pointing out graves of Tannaim and Amoraim. Navaraya has its graves as well. The two rabbis who are supposed to be buried here are Rabbi Eliezer haModai, the famous teacher from the Bar Kokhba story, and Yaakov the man of Kfar Navoraya. Yaakov makes sense, this is his town after all. Eliezer HaModai is an odder choice – he was from Modiin and was killed in Betar, neither of which are anywhere near here. How his grave “ended up” in Navoraya is a bit of a mystery.

But who was Yaakov and why is he given the same title as Yehuda on our page – איש כפר נביריא, the man from Kfar Navoraya? It is possible that they are one and the same and a mistake was made somewhere. In Megillah 18a we have a statement from our Yehuda about praising God:

We have the identical statement in the Yerushalmi (Berachot 9:1) but there it is said by Yaakov of Navoraya!  So there may be some confusion in the Bavli and Yehuda and Yaakov are one and the same.

And who was Yaakov? He seems to have been a slightly controversial character. We hear of him preaching in Tyre and in Caesarea, two cities with a very multifaceted population of Jews, pagans and Christians. Two of his statements aroused the ire of his teacher, Rabbi Hagi. He said that fish, like animals, must be slaughtered, and that one is permitted to circumcise a non-Jewish baby (presumably for conversion) on Shabbat. Each time his teacher said he should be flogged. On the other hand, he was praised for preaching against rabbis who pay to receive their positions. A statement in Midrash Kohelet Rabba seems to indicate that he was suspected of heresy, which usually means early Christian beliefs. Some scholars think his positions stated above connect to some Christian sects, but we have no proof. In any case by the Middle Ages he had become “kosher” enough that people wanted to visit his grave.

Navoraya and Yaakov/Yehuda are part of the fascinating mosaic that made up the Galilee, a place of great natural beauty and a very varied human population. 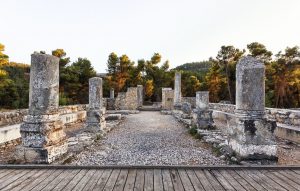 The synagogue as reconstructed today (Wikipedia)