A Story from the Underground

If you have been keeping up with Yevamot, you know that we have encountered some crazy, unlikely and seemingly theoretical situations in many places in this tractate. However, on pages 98 and 99 we read about a situation that unfortunately could have happened and probably did:

“five women whose offspring were mixed” (Yevamot 98b)

How do people get their children mixed up? Granted this is before hospital ID bracelets but it is also before hospitals. Women gave birth at home so how would the confusion arise? The answer lies on the following daf:

“his mother and another woman had two sons, one each, and they then gave birth to two other sons in hiding,” (Yevamot 99a)

The key words here are “in hiding,” במחבא in Hebrew. These women were in a hideout cave, presumably in a time of war. It was probably dark, confusion and fear reigned, and they gave birth, in the cave. In the struggle for survival, the children may have gotten exchanged. When did Jews use caves to hide in and why?

Caves were always used in our region, even into modern times. They are warm in the winter, cool in the summer, require minimal construction and can be used for storage, burial and even dwellings. We have found many such caves, particularly in the lowlands west of Bet Shemesh, where much of the rock is chalk and therefore easy to cut into. Many are not natural caves but openings created by people quarrying out stone. This served a double purpose – use the stone to build your house above and the cave/basement made by removing the stone as another room below. Caves were also useful for security – you could hide underground and no one would know where you are or how to reach you. 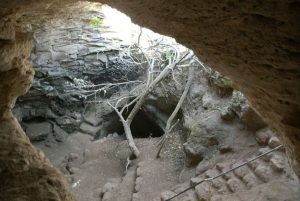 Cave in Hirbet Midras, with a mikveh (Wikipedia)

The cave phenomenon expanded greatly in the time of the Bar Kokhba Revolt (132 -135 CE). Up until the 1970s we knew about these subterranean hideouts from both Roman literature – they are mentioned by the historian Dio Cassius – and Talmudic literature. Both sources seem to indicate that the caves were prepared for guerilla warfare and that soldiers hid out in them during the ill-fated Bar Kokhba Revolt.

In the last fifty years, what was written on the page has come to life. Israeli archaeologists started finding caves all over the Shephelah (lowlands) and today we have found such hideouts in the Judean desert, the Judean hills and even some in the Galilee – more than three hundred systems to date. Often they were existing structures, like mikvaot or columbaria, that were turned into hideout caves, They are incredibly important in our research into the Bar Kokhba Revolt, helping us both to date it and to locate it. Before we found caves in the Galilee, the assumption was that only the people of Judah were involved in the Bar Kokhba story, now we see that the phenomenon was much broader. Finding coins in the caves helps us verify the dates that the story happened, and whether Jerusalem had become a pagan city by that time.

Some caves were clearly used as (temporary) residences. In the last few decades, quite a few hideout caves were discovered down near the Dead Sea. They tended to be at the end of riverbeds coming from the Judean Desert – Nahal Tekoa, Nahal Arugot and others. Archaeologists think that people in the communities on the edge of the desert gathered their belongings as the Romans advanced and fled through the dry riverbed, towards the caves in the east. There they hoped to wait out the war in relative safety. In the Cave of Letters excavated by Yigael Yadin in the 1960s in Nahal Hever he found documents (including, famously, letters signed by Bar Kokhba himself), dishes and, most tragically, keys. People were sure they would be able to go home again, but they never did. 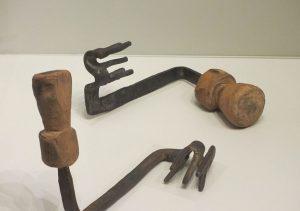 And what of the caves in more residential areas like the Shephelah? Were they all used exclusively by soldiers for guerilla warfare? Even the ones underneath houses?

Rabbi Elchanan Samet, in a seminal article in the 1980s, discussed the then emerging phenomena of Bar Kokhba hideout caves. He looks back at the sources and suggests that perhaps some caves were created for purposes other than military. Civilians, not just soldiers, wanted to be able to hide from the Roman army. The Gemara in Ketubot gives an example of such a scenario. There the discussion is about the conquest of a city where a tragic situation arises. Because of the conquest, all the wives of Kohanim in the city are considered to have been raped and therefore are forbidden to their husbands.  After discussing the possibility of witnesses who testify that the women were not raped, the Gemara adds:

“Rav Idi bar Avin said that Rabbi Yitzḥak bar Ashyan said: If there is a single hideaway(מחבואה) there it saves all the women married to priests.” (Ketubot 27a)

Unlike the Great Revolt in the year 70, the Bar Kokhba Revolt involved advance preparation. Jews knew the cruelty and rapacity of the Roman soldiers and they were determined to save themselves from the fate of their brothers and sisters decades earlier. So they created hideouts מחבואות  – a very specific term that does not mean just a basement or a shed but a place that would be near impossible for the enemy to find. These were used to hide in when soldiers came but they could also provide, by their very existence, a powerful halachic loophole. If the women of a town had such a refuge, even if they did not use it, they could be rendered permissible to their husbands. A terrible situation but a significant halakhic solution.

How many women really stayed in such hideouts long enough to give birth and raise children? We will probably never know but the combination of archaeology and literature draws a powerful picture of a people determined to survive and thrive against all odds. 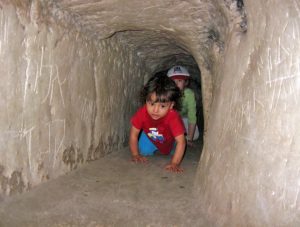