Today when we hear the word “sukkah” one image pops into the mind of Jewishly knowledgeable people – a temporary hut erected especially for the holiday of Sukkot in the fall, usually decorated and meant to be taken down after a week. But if we were to travel back to ancient times, a sukkah and variations of it were used for many other purposes.

In Bereshit when Jacob is traveling back to Canaan with his extensive family and possessions, he needs to stop and accommodate his animals. He stops in a place near the Jordan that took its name from the structures that he built there:

“But Jacob journeyed on to Succoth, and built a house for himself and made stalls (sukkot) for his cattle; that is why the place was called Succoth.” (Bereshit 33:17)

A sukkah can be a dwelling place for animals but it can also be used as a temporary home for people. Travelers may put up a sukkah for themselves on the outskirts of the city, as Jonah does, only to be overcome by heat, since his sukkah is not shady enough:

“Now Jonah had left the city and found a place east of the city. He made a booth (sukkah) there and sat under it in the shade, until he should see what happened to the city.” (Jonah 4:5)

Warriors besieging a city may put up sukkot, as Uriah tells King David (Samuel I 11:11) and guardians in the field also put up such structures to live in while they are harvesting the produce and need to keep it cool and safe. This building can also be called a shomera and sometimes it is made of stone, and therefore not temporary but used every harvest season:

Most importantly, a sukkah provides shade and safety in a somewhat desolate place. As Isaiah describes it:

“a sukkah which shall serve for shade from heat by day and as a shelter for protection against drenching rain.”(Isaiah 4:6)

Or even more comfortingly, as God assures Israel in Psalm 27 which we read on Sukkot:

“He will shelter me in His pavilion (sukkah) on an evil day, grant me the protection of His tent, raise me high upon a rock.” (Psalms 27:5)

Since a sukkah in ancient times was a structure used for various objectives, the sukkah used on Sukkot had to be purpose built. This is the idea behind Bet Shammai’s pronouncement that an “old” Sukkah cannot be used (Sukkah 9a). A sukkah older than a month is considered old but if it has been built especially for Sukkot it has no time limit. Although we do not follow Bet Shammai, we do go according to the Yerushalmi that something in the old sukkah needs to be refreshed, changed from the standard non-holiday sukkah to one that is special for the chag.

The main issue with a sukkah for Sukkot, besides the intention, is the roof, or as the Gemara calls it, the s’chach. It must be made of natural materials, not be attached to the ground and not become impure. What did roofs look like in ancient houses, as opposed to sukkot? In ancient Israel, roofs were usually flat. This was because it was easier to make a flat roof but also because the roof was an integral part of the house (that is why it needs a railing according to halacha). The roof was used to dry fruit, for storage, as a quiet place to escape to and read (we have laws about what to do if your scroll rolls partly off the roof on Shabbat) and as a place to sleep in the heat of the summer.

Roofs were usually made of wooden beams covered with some kind of mud plaster to make them solid and waterproof. Every fall, before the rains came, it was necessary to replaster the roof. This was done with a special tool called a roller, known as a maagelah מעגלה in Hebrew. The most famous “roller man” in Rabbinic literature is someone known as Honi HaMaagel. While we like to attribute his name to the famous story where he draws a circle (עיגול) around himself and won’t leave it till God brings rain, it is more likely that he had the name already because of his profession. 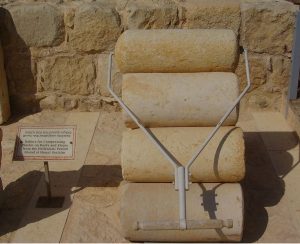 replica of a maagela (Wikipedia)

But what if you did not replaster the roof and left just the beams? This is the case discussed in the Mishnah on daf 15:

“MISHNA: In the case of a roof upon which there is no coat of plaster, Rabbi Yehuda says that Beit Shammai and Beit Hillel disagree with regard to the manner in which to render it fit.” (Sukkah 15a)

If you have just the beams, you have the makings of s’chach. However, you must do something to it in order to make it new; a sukkah for Sukkot and not a regular house. That something may be removing the thinner thatch between the beams or shaking it a little, depending on whose opinion you follow. Here we have a situation of someone who because of limited time and/or resources needs to use his actual house as a sukkah. The roof is permissible for s’chach, but it needs to be made more ”sukkah-like.”

Do we have a case where this was actually done? Tour guide and scholar Hughie Auman suggests that this scene fits perfectly with the story that happened in Gamla in the year 67 CE. Josephus tells us about the fierce battles there during the Great Revolt of the Jews against the Romans. Gamla, located on a steep cliff in the Golan, had its houses built along the slope of the cliff. You can go see the remains of the town today. Josephus describes the Roman assault on the city, which took place in the month of Tishrei. The Roman soldiers crowded into the city and were pushed onto the roofs of the homes. But because there were so many of them, the roofs caved in and many soldiers were crushed to death. 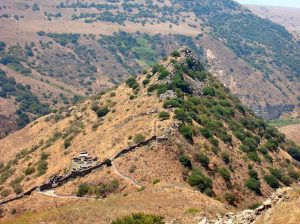 But Hughie asks why that would happen? After all, roofs were built to hold heavy loads, a few extra soldiers wouldn’t cause them to cave in. But what if these were not regular roofs? According to Josephus, the battle took place during the holiday of Sukkot. The Jews of Gamla, in the midst of a terrible siege, could not build proper sukkot. However, since the mud plaster was worn out anyway at the end of the hot summer, they could just remove or shake the cross thatching and make their homes into sukkot. But this s’chach, as opposed to a proper plastered roof, could not hold the weight of the soldiers. The soldiers, taken by surprise by these deceptive roofs, fell through them, crushing each other to death.

Tragically, the story does not end there. The Romans returned to storm the city again and this time they succeeded. Many Jews committed suicide and Gamla fell to the Romans, to remain untouched for centuries. When it was excavated after the Six-Day War, a number of special coins were found. They read לגאולת ירושלים הקדושה, for the redemption of Holy Jerusalem. Perhaps while building their improvised sukkot, the Jews of Gamla were thinking about the holy Temple and the celebration of Sukkot there. 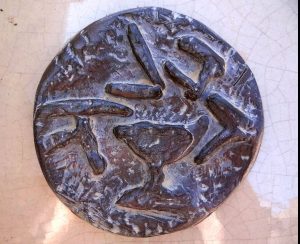