A Time to Tear

Nedarim 87a discusses two types of mistaken identity. In the case connected to our masechet, a man annulled the vow of his wife when really it was his daughter who had vowed. Then a comparison is brought to a much more tragic case: a person tears his garments (kriah) upon the news that his father had die and in the end it turned out to be his son. While the first story could be fodder for a farce about family mixups, the second definitely has more than a taste of tragedy. Let us use this comparison to examine what is kriah and where does it originate.

Rending one’s garment upon hearing bad news is an ancient idea. We hear of it multiple times in the Bible. The first to do it in Bereshit is Reuven, upon learning that Joseph has been sold as a slave:

“When Reuben returned to the pit and saw that Joseph was not in the pit, he rent his clothes” (Bereshit 37:29)

Later, when Jacob believes that Joseph is dead he also tears his garments and then wears sackcloth and mourns for his son. David tears his clothes both upon hearing of Saul and Jonathan’s deaths and when he is informed of Avner’s murder at the hands of Yoav. And Job, the ultimate sufferer, tears his clothes when he hears of the destruction of his home and his family:

The actual halacha of rending garments is not learned from any of these cases but rather from a negative case: when someone is told not to tear his clothes in mourning. The Gemara in Moed Katan (24a) cites the instructions given to Aaron and his remaining sons on the day that Nadav and Avihu are killed by a heavenly fire:

“And Moses said to Aaron and to his sons Eleazar and Itamar, “Do not let your hair grow wild and do not rend your clothes, lest you die and anger strike the whole community. But your kin, all the house of Israel, shall bewail the burning that God has made.” (VaYikra 10:6)

You, Aaron and sons, who are priests in the Tabernacle, cannot have outward signs of mourning, but for everyone else, that is the rule for mourning: rending clothes and not cutting hair, i.e., letting it grow wild. 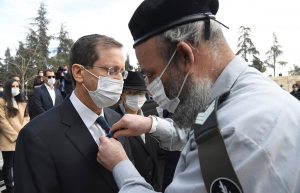 The idea of tearing kriah seems to answer a deep psychological need. It has been explained as a substitute for mutilation, which Jews are forbidden to do (see Devarim 14:1) or as a way to release one’s anger and sorrow at the news of a death. Terrible news demands an extreme reaction. In order not to cause oneself or others harm, the reaction is limited to a physical object. Here is what Maimonides says about the matter in connection to the laws of Shabbat:

“A person who tears in a fit of rage or [one who rends his garments] for the sake of a deceased person for whom he is required to rend is liable, for by doing so he settles his mind and calms his natural inclination. Since his anger is soothed through this act, it is considered to be constructive in nature and he is liable.” (Mishneh Torah Hilchot Shabbat 10:10)

In the Bible and in the halacha one can tear kriah for reasons other than a death. It is done at the hearing of bad news, like a defeat in war, as we see with Joshua after the defeat at the Ai (Joshua 7:6) and King Hezekiah with the Assyrian invasion (Kings II 19:1).

It can also be something that a victim does after being attacked, as a sign of great sorrow. That is the case in the terrible story of Tamar and Amnon. After Tamar is cruelly raped and then thrown out the door by her half-brother Amnon, she grieves by putting ashes on her head and tearing her special cloak that only princesses wore:

“Tamar put dust on her head and rent the ornamented tunic she was wearing; she put her hands on her head,.and walked away, screaming loudly as she went.” (Samuel II 13:19)

In Jewish law, we also are supposed to tear our clothes at the sign of a national destruction. The law in the Gemara (Moed Katan 26a) is that one who sees Jerusalem in its destruction or the Temple Mount with no Temple on it, tears kriah. Today, many halachic authorirtes including Rabbi Eliezer Melamed say that because Jerusalem is under Jewish sovereignty, we no longer tear when seeing it. However, if someone sees the Temple Mount after a period of a month or more, he or she is supposed to tear kriah at that site because the Temple has still not been rebuilt. 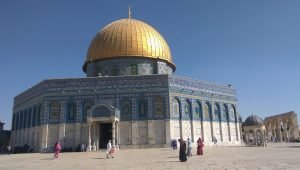 There are other forms of mourning that we hear about in ancient sources; some we still do today and others have passed from the scene. A common idea in the Bible is that a mourner goes barefoot, for example King David as he is being exiled from Jerusalem in the wake of his son Avshalom’s rebellion (Samuel II 15:30). Today mourners do not go barefoot but they do refrain from wearing leather shoes.  In the Bible people also covered their head to mourn, as Haman did when he was bested by Mordechai (Esther 6:12). The Gemara discusses this requirement as well as the idea that one should turn the beds upside down. We do not do either of these things today, mainly because our ideas about what is proper dress, as well as our furniture, have changed.

Something we do see in houses of mourning today, which is not mentioned in the Gemara, is covering the mirrors. This idea only appears in halachic literature in the 18th century, with the Hatam Sofer. It may be connected to the defunct practice of turning over the beds, i.e, a sign that life is not normal and that someone made in God’s image has left the world.

May learning about kriah give us the merit of long life, for us and the people we love!

Thank you to Rabbi David Brofsky for his help with this article. His book Hilchot Aveilut provides a masterful overview of these laws.