Yesterday’s mishnah and today’s daf spend a good amount of time discussing time-related issues. We start off with a disagreement between Rabbi Meir and Rabbi Yehuda about the time limit on eating  hametz on the 14th of Nisan. The Gemara then launches into a discussion about rgw accuracy of witnesses’ testimony regarding time. If one witness says an incident occurred at the 3rdhour and another says at the 5th hour, can we synchronize their testimonies and say one meant the end of the 3rd and one meant the beginning of the fifth?

All these discussions are predicated on the fact that people had a sense of time, of the hours in the day. But just how did they tell time before digital watches, cellphone clocks and even Greenwich Mean Time?
When the Gemara speaks about hours (the third hour, the fifth hour), it means שעות זמניות, the division of the time between sunrise and sunset into twelve equal pieces. Obviously the length of those hours is different at different times of the year. and sunset are easy to determine. But what about the hours in the middle of the day?
Our daf addresses this very issue. It admits that knowing exactly when hour three ends and hour four begins is difficult and therefore we allow a margin of error. But knowing if it is morning (hour five) or afternoon (hour seven) is obvious and that is known to all. In order to determine the other hours, a common tool was a sundial.
A sundial relies on light and shadow and how they change at different times of day. Sundials were used all over the and the land of Israel was no exception. Some nice examples of private sundials were found in the mansions of the kohanim in the Herodian Quarter in 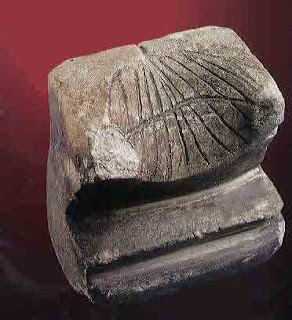 But making a private one was expensive, and for most people, unnecessary. You woke up at sunrise, went to work, took a break at midmorning to eat, and worked again until sunset. It is no accident that sundials were found in priestly houses because they needed to know exact times for giving the sacrifices.
The priests were also timekeepers for the people on a weekly basis, on Friday afternoons. The Gemara tells us about the trumpets blown to announce that Shabbat is getting closer and we have a great archaeological piece of evidence for that fact. When the street below the Western Wall of the was excavated about twenty years ago, a cornerstone to the building above was found. 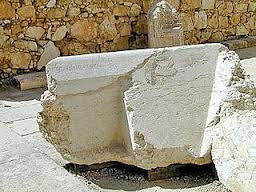 On it was inscribed: לבית התקיעה להכ . .  Archaeologists relate this stone to the trumpeting that the kohanim would do on Friday afternoon. There was a specific site, a “bet hatekiah,” high above the city on the Temple Mount, where you would go to announce (להכריז) or to divide (להבדיל) between weekday and Shabbat. This ancient precursor to our modern “Shabbat siren” enabled everyone to begin Shabbat on time.

Let’s use our time wisely, no matter what methods we use to tell it!