How can we keep the spirit of Yom Tov as a holy day when one can cook, bake, slaughter and even purchase food? This is the dilemma the rabbis are dealing with in this third chapter of Betzah. One of the ways to make the day feel different was not to buy food in the usual manner, by weight and with money, but in a more informal way.  In that vein we learn in the Mishnah on daf 29:

“MISHNA: One person may say to another on a Festival: Fill this vessel for me but he may not ask him to fill the vessel in a particular measure. Rabbi Yehuda says: If it was a measuring utensil, he may not fill it.” (Betzah 29)

There was no exchange of money on Yom Tov itself, rather debts were paid after the holiday. Still, one had to have a rough idea of how much was bought/sold. People would bring their own vessels and would know approximately how much they contained. However, there could not be an exact measuring going on, that is considered עובדא דחול, a weekday activity. Rabbi Yehuda restricts things further and does not even allow utensils used specifically for measurement (like our measuring cups of today). 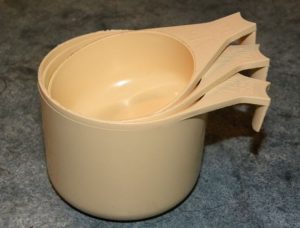 The Mishnah continues with stories and comments by two individuals named Abba Shaul, one from the time of the Temple who was a shopkeeper, and one a third generation Tanna:

“There was an incident involving Abba Shaul ben Botnit, who would fill his measures on the eve of a Festival and give them to his customers on the Festival. Abba Shaul says: He would do this even on the intermediate days of a Festival because of the clarity of the measures. And the Rabbis say: Even on a weekday it is proper to do so, because of the draining of the measures.” (Betzah 29)

Here we have an additional element – it seems that Abba Shaul ben Botnit was concerned not only about acting properly on Yom Tov but about the honesty of his measures. He would “prepackage” everything in order to make sure that the volume settled and the customer got his full measure. Later the Gemara adds that he did this also to save time, so that he could get to the Bet Midrash faster.

Commerce is never only about making money but also about efficiency and most importantly, honesty. The Torah emphasizes the need for merchants to keep honest weights, a difficult practice because cheating was so easy:

How did people purchase goods in the old days? Some things were bought by weight and some by volume. Scales had two trays, one for the item and one for a stone that weighed a certain amount (think of the pictures on old Rosh haShanah cards). 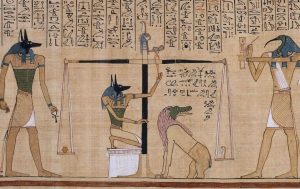 Scales in the Egyptian Book of the Dead (Wikipedia)

The merchant kept a set of weights and it would have been fairly simple for him to shave off a small amount from each stone. Each customer would pay just a tiny bit too much and at the end of the month the storeowner made a nice profit with no one the wiser. The same thing with volume – sometimes people brought their own measuring cups from home (as we see in our Mishnah) but it was probably more common to just bring your own jug and ask the merchant to measure out the amount. A little less for each customer, a tidy sum for the storekeeper. Because of the ease of cheating the Torah tells us that there is Someone else watching you:

“You shall have an honest balance, honest weights, an honest ephah, and an honest hin. I the LORD am your God who freed you from the land of Egypt.” (VaYikra 19:36)

The rabbis decided not to rely only on people’s fear of God and they instituted a more rigorous form of maintaining honesty. They mandated an inspector to check the weights and measures in the market place and make sure that these were accurate:

“The Sages taught that the phrase: “You shall not have,” teaches that the court appoints market inspectors (agardimin)  to supervise the accuracy of measures.” (Bava Batra 89a)

Interestingly, the Gemara goes on to cite a disagreement between Shmuel and Karna over whether prices should be regulated along with weights. Whereas weights have to adhere to a certain universal standard, do goods have to cost the same amount or is each merchant able to charge whatever the market will bear? This is a fascinating question that the medieval commentators continue to discuss, and of course it is still an issue in our world today.

The word in the Gemara for market inspector is agardimin, probably a mispronouncement of the Greek term for these inspectors, agoranomos. The Greeks, and then the Romans, were also concerned about honesty in the marketplace. They maintained it in a few ways. One was by having an official position of market inspector, someone who checks the weights and sometimes also the prices and quality of whatever is being sold. This agoranomos (from the Greek agora = market) was an honored citizen who had to be known as an honest man. Rav, the great sage of Babylonia, was appointed agoranomos by the exilarch but he got in trouble because they disagreed about the scope of his duties. In excavations done in Jaffa, a house was uncovered from Second Temple times with an inscription that said Yehudah Agoranomos, Judah the market inspector.

Greeks and Romans also worked to standardize measurements as much as possible. In Pompeii a table was discovered that had holes of various sizes in it: 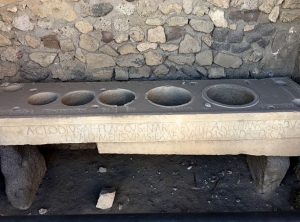 This table, the Mensa Ponderaria, was meant for customers to come and measure the cups used by the merchants, to ensure that that their sizes were the correct, standard ones. In Rome itself, in the Temple of Jupiter, was the amphora capitolina, the standard jug against which others were compared.

In the land of Israel, weights and scales have been discovered in many places. Tables similar to the one in Pompeii have been discovered at Maresha near Bet Shemesh and on the Pilgrim’s Road in the City of David, showing us that commerce was practiced there. Weights are often blank but some have a name or number written on them, as is the case with a weight just recently discovered in the City of David. In at least one case, a weight has solved a Biblical puzzle. A stone with the word “pim” פים on it was discovered. This explains an obscure reference in the book of Samuel, telling us about prices for metalwork done by the Philistines:

“The charge for sharpening was a pim. for plowshares, mattocks, three-pronged forks, and axes, and for setting the goads.” (Samuel I 13:21)

After many centuries of not knowing what a pim was, we discovered one! Scales have also been found as well as stone vessels which may or may not have been measuring cups. 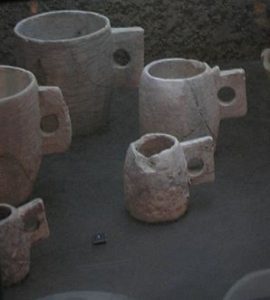 To return for a minute to Abba Shaul ben Botnit: the Gemara relates that he was so scrupulously honest that he insisted on donating to the Temple a large amount of goods that he felt he had charged his customers for unfairly. Coincidentally or not, this same individual is the one who indicts the corrupt priestly families for their taking advantage of their position in order to make money:

Abba Shaul ben Botnit held himself to a very high standard, shouldn’t the kohanim in the Temple do the same?