A Work of (HE)ART

Hello Ketubot! In this new tractate we will take a look at marriage obligations and responsibilities. The main document that spells out these obligations is the ketubah, the marriage contract for which our tractate is named. The word ketubah designates the contract but it is also used as shorthand in the Gemara for the money that a woman gets when her husband dies or divorces her. Besides his monetary obligations, the ketubah also lists the husband’s other responsibilities towards his wife: clothing, shelter and sexual satisfaction. Have we discovered any ancient ketubot?

The Gemara (Ketubot 82) asks whether the ketubah is derived from Torah law or was it an innovation created by the rabbis to protect women. Whatever the answer, it is clear that already by the time of Shimon ben Shetach (2nd century BCE) there is a reform of it, indicating that it is a rather ancient institution:

“Rav Yehuda said: At first they would write for a virgin two hundred dinars and for a widow one hundred dinars. and then the men would grow old and would not marry women [as they did not all possess such large sums of money], until Shimon ben Shetacḥ came and instituted that all of his property is guaranteed for her marriage contract.” (Ketubot 82b)

At first cash was set aside for payment to the woman in the event of divorce or death. But since it was hard for a young man to accumulate so much money, marriages would be deferred for a long time. In addition, if the money was already set aside, its loss was not felt so strongly and men might be too quick to divorce, not caring about losing the ketubah money. Shimon ben Shetach altered the law, ruling that the ketubah money would from now on be taken directly from the husband’s property. This way he could marry young (and accumulate the money over time) but he would feel the sting of paying out the ketubah and would think twice about divorce.

By Second Temple times the ketubah seems to have become a common document. We have a few examples of ketubot found in archaeology. The oldest one is from the second century BCE, written in Aramaic in Hebrew script and . . . not belonging to a Jewish couple!

In the mid 1990s some pottery shards were discovered in the course of an ongoing dig in the caves at Maresha. Maresha, later known as Bet Guvrin, was a Judean town in First Temple times, in the lowlands not far from the coast. It was destroyed with the Babylonian conquest and in early Second Temple times, was re-inhabited by Edomeans, non-Jews who originally lived in TransJordan and then expanded to western Israel. These Mareshans had a flourishing cultural life that came to an abrupt end when their town was conquered by the Hasmonean king John Hyrcanus in 112 BCE. He offered them the choice of converting to Judaism or leaving their town. Some Edomeans, notably Herod’s father Antipater, chose to convert but most others fled. Before they left, they destroyed their homes, dumping the contents of the houses into their basements. Millennia later, these basements are a treasure trove for archaeologists. 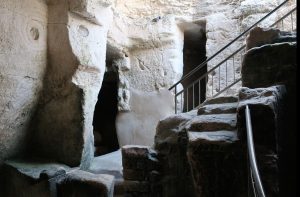 One of the caves excavated at Maresha (Wikipedia)

The pottery shards discovered in Maresha show a document that aligns well with Jewish marriage laws and customs. It lists the names of the groom and bride, the amount of money that the bride’s father gave her to start her new home (a large sum, three hundred zuz), states that only the bride’s sons will inherit from the husband (safeguarding her children in case the husband takes a second wife) and is written according to the “nomos,” the custom, of the girls, a phrase similar to the Jewish ketubah’s כדת משה וישראל, according to the customs of Moses and Israel.

But the names in this ketubah are definitely not Jewish ones. The groom is named Kosram the son of Kosid, the bride is Arsinoe the daughter of Kosid (presumably a different one). Kos was the chief god of the Edomeans and a name with Kos in it is a theophoric name, similar to Hebrew names with El or Yah. The remarkable parallels to Jewish marriage laws don’t necessarily indicate that Jews copied Edomeans or vice versa, but rather that both were following Hellenistic laws and customs. Each group put their own spin on the Hellenistic formula, with the Jews notably providing for the wife in the event of her divorce or widowhood.

A few centuries later, and about one hundred kilometers east and south, we find another ketubah, this one definitely belonging to a Jewish woman. In 1961, Israeli archaeologists did an amazing rescue operation in caves near the Dead Sea, hoping to find antiquities before thieves and Bedouin did. They succeeded beyond their wildest imaginings. Yigael Yadin, one of the archaeologists involved, discovered a cave that became known as the Cave of Letters. His most spectacular find was a cache of letters written by “Simon President of Israel,” better known to us as Simon Bar Kokhba. This cave was a refuge for Jews escaping the Romans during the Bar Kokhba Revolt in the 130s of the Common Era. 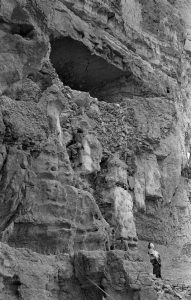 But besides Bar Kokhba’s letters, Yadin discovered a very carefully packaged, and thus preserved, archive of a common woman named Babatha. Babatha led a complicated and litigious life. She was married twice and had property from her father and from her husbands. She spent a lot of time and energy trying to protect her rights to these properties and, fortunately for us, she kept every document written to or by her. One of these documents was her ketubah from her second husband.

The ketubah was wrapped carefully and kept separately from the other documents. It provides Babatha with a settlement of one hundred zuz, indicating that this was a second marriage and not a first. It is written כדת משה ויהודאי, like the custom of Moses and the Jews, an earlier version of our formula of Moses and Israel. It includes a formula used by the Jews of Judea and not of Jerusalem or the Galilee – that after her husband’s death, Babatha will continue to receive food from her husband’s heirs until they decide to give her the ketubah money and send her packing (the Jerusalem and Galilee Jews were more merciful and provided for the widow to stay in her husband’s house until her death).

Babatha was running from her home after the Romans began their attack on rebellious Jews. Along with her documents she brought jewelry, a copper mirror, perfume and her house keys. She hoped to return one day to her home but she never did. But her ketubah reverberates through the ages to this day, providing us with amazing evidence of how people interpreted the Rabbinic law.

Today ketubot retain their legal importance but are also often richly decorated and displayed in a couple’s home. Their significance is only heightened by the fact that they are now works of art. 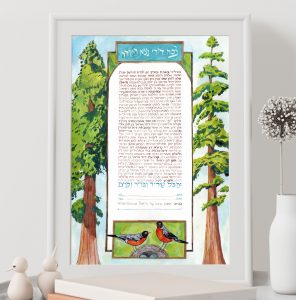