Ketubot continues with obligations that husbands and wives owe each other. Among other restrictions, a husband cannot forbid his wife from קישוט, adorning herself (Ketubot 70a). This adornment seems to be perfume or cosmetics but the same word is also used for jewelry. A woman must be allowed to make herself beautiful if she so desires, and particularly on the holidays:

Even though the Gemara talks about how this rule is different for poor and for wealthy women, there seems to be a general acknowledgment that women want to beautify themselves. This obvious fact – that most women like jewelry – is borne out through our sources and through archaeology. Let’s take a look at some jewels in our history.

Tanakh is full of references to jewelry. Bracelets and rings could be a generous gift to a prospective bride, as in the story of Abraham’s servant and Rivka:

“When the camels had finished drinking, the man took a gold nose-ring weighing a half-shekel and two gold bands for her arms, ten shekels in weight.” (Bereshit 24:22)

Crowns were worn by royalty, like Queen Esther;  a crown could also be a sign for  a prospective king as in the one brought to the new king David by the Amalekite boy who claimed to kill King Saul:

“So I stood over him and finished him off, for I knew that he would never rise from where he was lying Then I took the crown from his head and the armlet from his arm, and I have brought them here to my lord.” (Samuel II 1:11)

The high priest in the Temple wore clothes similar to a king, including rich colors but also a crown-like tiara, the ציץ, and a large “necklace,” the חושן, loaded with precious stones.

Jewelry could also be donated, sometimes for positive and sometimes for negative reasons. In the desert, the Israelite men were quick to hand over their wives’ earrings in order to create the Golden Calf. But when Moses asked for donations of precious metals to build the Tabernacle, the men and women came forward with their riches:

“Men and women, all whose hearts moved them, all who would make an elevation offering of gold to God, came bringing brooches, earrings, rings, and pendants gold objects of all kinds.” (Shmot 35:22)

Beside gifts, spoils of war (Bamidbar 31:50) or signs of royalty, jewelry also connoted wealth and sometimes hubris. Isaiah brings a long and super-detailed list of jewels in his denunciation of the haughty women of Jerusalem, whose comeuppance is inevitable:

“In that day, my LORD will strip off the finery of the anklets, the fillets, and the crescents; of the eardrops, the bracelets, and the veils; the turbans, the armlets, and the sashes; of the talismans and the amulets; the signet rings and the nose rings;” (Isaiah 3: 18-21)

The prophecy is dire but it does give us a great list of types of jewelry, some of which are echoed in the Mishnah’s equally detailed listing of what can and cannot be worn outside on Shabbat.

As we have seen, jewelry is a double-edged sword. It could signify beauty, royalty and generosity or hubris and immodesty. This concept is also present in later sources. While the Mishnah acknowledges that women want to wear jewelry, the rabbis also understood the natural impulse to show off that finery. That is why they forbade certain jewels from being worn on Shabbat in a public space – a woman would be tempted to take off her lovely new necklace to show it to her friends, thus violating the prohibition of carrying. There is also a suggestion in the midrash that jewels are fine, in your own home – you do not need to flaunt them outside.

“Our sages maintain that she is forbidden to wear them in public even on a weekday, for people would stare at her if she did so, and that is discreditable to a woman. Ornaments were given to woman to wear only inside her home.” (Tanhuma VaYishlach 5:2)

The list in Mishnah Shabbat is extensive and includes hair ornaments, necklaces, rings, earrings, belts and more, here are just a few items:

Some of these can be defined, others are lost in the mists of time. A totefet seems to be a box worn on her forehead, perhaps with an amulet, a similar design to totafot, i.e., tefillin. A city of gold is a tiara (see here) and a catela is a chain, some form of a necklace.

But what did all these items look like?  What were the stylists of Tannaitic times working with? Fortunately, besides literature we have archaeology. We know that ancient Romans loved jewelry and we can assume that at least a few styles from the big city were copied in the backwater of the land of Israel. If we look at frescoes from Pompeii we can see elaborate hair ornaments: 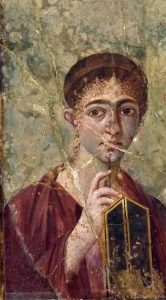 As well as some fantastic earrings: 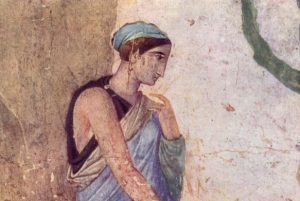 Closer to home, we have the ladies that adorned mosaics in some synagogues and wealthy homes. The famous “Mona Lisa of the Galilee,” found in a Zippori villa, has some pretty blingy earrings: 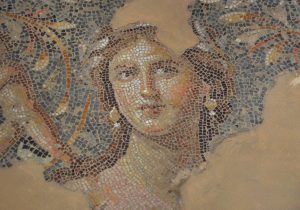 The “season ladies” that appear at the corner of the zodiac panels in a few different synagogues, including Zippori, Bet Alfa and Hamat Tverya are also helpful. While the Zippori seasons are mostly unadorned: 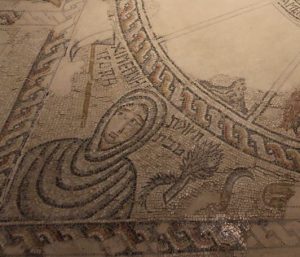 in Bet Alfa and Hamat Tverya they go all out with earrings, necklaces and hair ornaments: 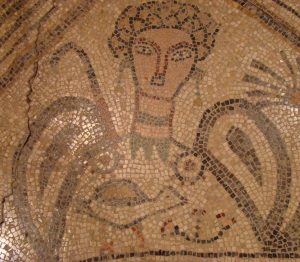 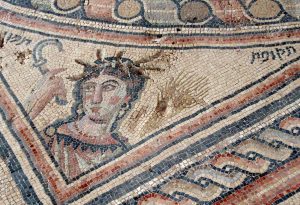 Finally, in the Cave of Letters in the Judean Desert, Yigal Yadin found a collection of items that belonged to one of the women who had fled there to hide out during the Bar Kokhba revolt. Among the dishes, baskets and documents he found a beautiful wooden box, perhaps to keep jewelry in, a mirror and some beads. Even in the direst of circumstances, women want to be beautiful.