All You Need is Love

The fasts, famines and general tribulations of Masechet Taanit end on a happy note as the final Mishnah discusses two holiday celebrations, one on Yom Kippur and one on Tu B’Av. In both, girls would go out dancing in the vineyards and “catch” themselves a husband:

Yom Kippur of course needs no introduction, although perhaps the idea of having a dance party towards the end of the day seems odd to us. But let us remember that Rabban Shimon ben Gamliel is talking about Temple days, when at the end of Yom Kippur the people would know if their sacrifices and worship had been accepted, and if they were, of course you would want to dance!

But what about Tu B’Av? Until very recently this minor holiday was off the radar for most Jews. It has experienced a resurgence in modern Israel, where it has gotten various new names – the Jewish holiday of love, or the oxymoronic and semi-offensive Jewish Valentine’s Day. Let’s explore Tu B’Av as more than another way for flower sellers and chocolate companies to make money. 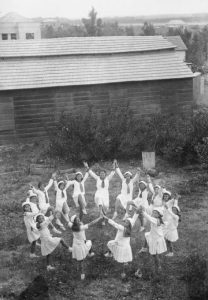 The Gemara (Taanit 30-31) gives a number of reasons why Tu B”av is a festive day. Tu b’Av was identified with the Chag Hashem related at the end of book of Judges:

“And they said: ‘Behold, there is the feast of the LORD from year to year in Shiloh, which is on the north of Beth-el, on the east side of the highway that goeth up from Beth-el to Shechem, and on the south of Lebonah.’ “(Judges 21:19)

On this day people would come from all over Israel to feast in Shilo. The women would dance and the men would choose brides. This was the venue chosen to bring the tribe of Benjamin back into the nation. After a terrible and costly civil war at the end of the period of the judges, the tribe of Benjamin was almost wiped out. Even worse, there were only men left and the other tribes had sworn not to give their daughters to them in marriage. The creative solution was that the remaining Benjaminites would come to Shilo and when the girls went out to dance in the vineyards, they would grab brides for themselves, not needing the consent of the fathers (although hopefully getting the consent of the prospective brides). In addition,  the Gemara explains that Tu b’Av was the day that the tribes could marry amongst each other, leading to greater unity and love. Hence Tu b’Av as the holiday of love. 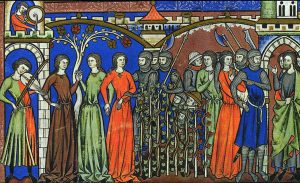 The ancient site of Shilo where this story took place has been excavated and is open to visitors. Shilo is unusual among Tanakh sites in that the modern community was built forty years ago literally above the ancient one. You can see the tel and the remains of the Biblical town.  You can also see what we believe is the site of the Mishkan, Israel’s holiest place for over three centuries. Shilo was destroyed in the days before King Saul but it was soon rebuilt and we have remains there from Second Temple times and on, almost up to modern times. At the top of the hill, in the modern community, is an extraordinary synagogue designed to look like the Mishkan. Tel Shilo often hosts a special event to celebrate Tu b’Av, the red-letter day on its calendar. 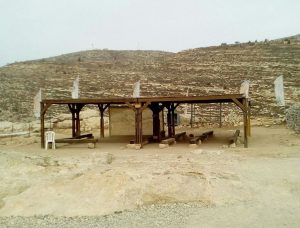 The Gemara gives some other reasons for the celebratory nature of Tu b’Av. An additional one that connects to the tribes is that on this day King Hoshea ben Elah removed the barriers that stopped the northern tribes from visiting the Temple in the southern kingdom of Judah. The theme here is that Tu B’Av is a day of unity and connection, if not necessarily (or only) of romantic love.

The Gemara also points out this is the time in the summer when the days start to (slowly!!) grow a little shorter and colder. On Tu B’Av they stopped cutting wood for the Temple because

“Rabbi Eliezer the Great says: From the fifteenth of Av onward, the strength of the sun grows weaker,” (Taanit 31a)

and the wood would not be sufficiently dry to be used on the altar. By this time, the peak of the summer has passed.

Finally the Gemara mentions a didactic point. As the days are growing shorter and the nights longer, now is the time to spend those nighttime hours in the bet midrash, studying Torah. Ironically, the week of Tu b’Av and afterwards are today considered “bein hazemanim,” a sort of semester break for yeshiva students. This is one of the few times in the year when yeshivot are closed and students go out to see the land. For once they are not in the bet midrash but on tiyulim all over Israel. But perhaps that is also a form of Torah study, learning the land and immersing oneself in it.

Today Tu B’Av has become a popular date for weddings, it is also a time to let go and have some fun and music after the difficult and mournful period between the seventeenth of Tammuz and the ninth of Av. In fact, the Shabbat after Tisha B’Av, known as Shabbat Nachamu, has long been a traditional time in the Orthodox world to have singles’ weekends, perhaps a modern version of the Chag Hashem in Shilo.

However we celebrate Tu B’Av, let us try and make it a day of unity, bringing the Jewish people together so that we no longer have to mourn at all. 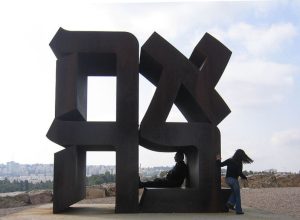