And the Walls Came Tumbling Down

Welcome to Masechet Megillah! The first part of the tractate is all about reading Megillat Esther on Purim and so we will be in a Purim mood for a few weeks, a nice change from fasting. Purim is a strange holiday for many reasons. One of its strangest elements is that it is celebrated on different days in different places. The fact that all Jews celebrate holidays together is a significant unifying factor and yet on Purim the law is that the people of certain cities actually celebrate a day later than the people of other cities.

Shushan Purim, the fifteenth of Adar, is meant to be kept by the residents of all walled cities. In reality, today it is mainly Jerusalemites that celebrate Shushan Purim, along with some other cities like Tzfat and Hebron that keep both days. 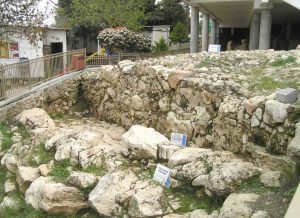 But our question today is how do you determine a walled city? The Mishnah tells us:

The determining factor is when the wall was built and the Mishnah says it has to have been built in the time of Joshua, conqueror of the land of Israel. This is strange to say the least. What does Joshua have to do with Purim? It would make much more sense to follow the opinion of Rabbi Yehoshua ben Korha in the Tosefta, that any city that has been walled since the time of Ahashverosh is considered a walled city because:

The Gemara explains that our Mishnah’s position is based on a verbal analogy but the philosophic issue still remains – why would you go all the way back to Joshua when the whole idea of Shushan Purim is based on events in the time of Ahashverosh?

The Yerushalmi gives a powerful reason, and it is quoted by Maimonides in the Mishneh Torah:

“This was made to depend on the days of Joshua in deference to Eretz Yisrael which was in ruins at that time. . . Eretz Yisrael is thus remembered in connection with the miracle of Purim.” (Mishneh Torah Hilchot Megillah 1:6)

The story of Purim takes place in the Diaspora. Not only are the events set there, the story is imbued with the experience of the Jewish people in exile. They are under the authority of a foreign king, subject to his whims and at the mercy of any hater that may come along. Only through the intervention of well-placed “court Jews” are they saved. And that rescue does not free them completely, rather they are still stuck in Achashverosh’s kingdom. And of course, God’s presence is hidden throughout the Megillah. The Gemara emphasizes this idea of exile when it explains why we do not say Hallel on Purim, despite the fact that a miracle was done and we were saved:

“because Hallel is not recited on a miracle that occurred outside Eretz Yisrael.” (Megillah 14a)

The fact that the story of Purim occurred outside the land of Israel lowers its importance slightly. Yes, it is a great miracle but it did not take place in the natural home of the Jewish people. And what of the Land of Israel – is it empty of Jews during the time period of the story of Purim? From the Megillah it would seem that all the Jews are scattered throughout Ahashverosh’s lands, but we hear nothing about the Land of Israel. The only reference is to tell us that Mordechai was exiled from Jerusalem with the beginning of the Babylonian conquest.

However, if you look at the other books of the Bible from this time period: Ezra, Nehemiah, the last prophets Haggai Zechariah and Malachi – a different picture emerges. There is a community in the land. Albeit a small and struggling community, the few brave souls who chose to return when the Persian king Cyrus, predecessor to Ahashverosh, allows it. This small group is living in and around Jerusalem, trying to rebuild it (and its wall) and to reinstate Temple service. 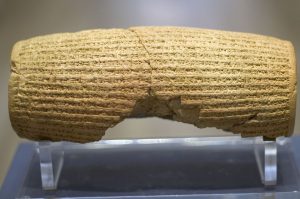 The Megillah takes no notice of this group but they are very much connected to Ahashverosh’s great Persian empire. In fact, according to the book of Ezra, it is during the time of Achashverosh that local enemies of the returning Jews write a nasty letter to the king, telling him that he should stop the work on the Temple (Ezra 4:6).

The early pioneers of the Return to Zion are far away from the great and cosmopolitan empire in Shushan. Their fellow Jews seem to have forgotten about them in the midst of their own troubles. To be anachronistic for a moment, it is similar to the Jews in the great European communities pre-World War II. Most of them are not thinking about the struggling Zionists far away in benighted Palestine.

Even if the Shushan Jews are not thinking about them, the story of Purim impacts not only on the Diaspora Jews but also on the Jews of the land of Israel. It is in the time of Darius, successor to Achashverosh (and according to the midrash, the son of Queen Esther and the king) that work is allowed to begin again on the Temple. Perhaps this is an indirect result of the salvation of the Jews and their renewed influence in Shushan.

Purim is a Diaspora story. However, even in the depths of the Diaspora, Jews always need to remember the Land of Israel. They need to know that what happens to them may well have an effect in Israel and vice versa. And even if that is not the case, Israel can never be forgotten, no matter how comfortable the Diaspora may be. Nachmanides, in his commentary on our tractate, explains that we hark back to the time of Joshua because in the time of Achashverosh the walls of Jerusalem were destroyed. It would be disrespectful to Jerusalem to have a special day where it was not included, so we go back to an earlier time, where Jerusalem was a stronger city.

Rabbi Abraham Isaac HaKohen Kook adds another idea, one that matches with his Zionist philosophy. The Gemara (Megillah 14a) adds another reason why we do not say Hallel on Purim – even after the miracles unfolded, we remained the servants of Achashverosh. We were not really freed from his yoke. Rabbi Kook explains that the only way a Jew can be truly free is if he connects to the land of Israel. By making Shushan Purim dependent on Joshua, we look to the glorious past of the Land of Israel as well as to the future (and present!) where we will again live in the land, as authentic and free Jews. 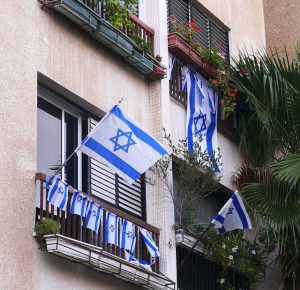 Note #1: Some of the ideas and sources in this article come from Rabbi Yehuda Zoldan’s article in Da’at on this topic.

Note #2: The order of the Persian kings and how they match up to the kings mentioned in the Bible is notoriously complicated. I am following the traditional view that Darius succeeded Achashverosh.