The final chapter of Eruvin rounds up all sorts of interesting little pieces about carrying. It starts with a question that reveals more about what is being carried than about the carrying method:

MISHNA: One who finds phylacteries outside the city on Shabbat, where they are in danger of becoming lost or damaged, brings them in to his house pair by pair by donning them in the manner in which they are typically donned for the mitzva.

Tefillin have a special status. We cannot simply leave them lying in a field until Shabbat is over, it might rain or they might be chewed on by an animal or stolen. We must find a halachic way to bring them to safety and the Mishnah explains that we do that by wearing them, something that is not technically carrying. This leads into a long conversation about tefillin, when they are worn and by whom. Let’s take a look at what we can learn about tefillin in ancient times and today. 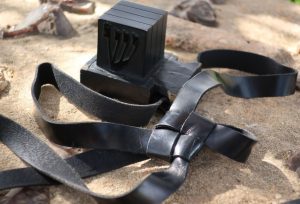 A cursory look at the Gemara raises a number of issues. Even though it is clear to us today that tefillin are donned during morning prayers, during the week and not on Shabbat, and (usually) by men, the Gemara has to debate all those points. Essentially, it seems that tefillin should be worn all day, every day, including Shabbat and holidays. And in fact the Gemara talks about a laborer who has to put his head tefillin on his arm while he carries a burden in from the fields, showing that tefillin is part of his everyday apparel. The question of when you wear tefillin leads into another question: is tefillin a timebound mitzvah or not? If not, women should be obligated to wear them and indeed the Gemara brings the example of Michal, King Saul’s daughter, who wore tefillin and was not criticized for it. Another issue is can you wear more than one pair at once?

The commandment of tefillin is written four times in the Torah, twice in the exodus story and twice in the shema passages in Devarim. Here is one example:

“And this shall serve you as a sign on your hand and as a reminder on your forehead—in order that the Teaching of the LORD may be in your mouth—that with a mighty hand the LORD freed you from Egypt. (Shemot 13:9)

In another verse, the word zikaron, reminder, is replaced by the word totafot, a strange word that the Gemara interprets as four but which also seems to mean reminder or memory. In any case, the halacha is to create two boxes, with four Torah texts inside each, the order of which is debated. Many of the details of tefillin, like the color of the straps and the way the texts are inserted, are considered Halacha leMoshe miSinai, a tradition passed down and not learned out from any particular verse.

The earliest mentions of tefillin in a non Biblical text are in the Letter of Aristeas, a Hasmonean era document (2nd century BCE), and in Josephus (1st century CE). Both of them only mention the tefillin shel yad, those that go on the arms. We also have a fascinating statement by Shammai  (1st century BCE) that he used his mother’s father’s tefillin and did not think they needed to be checked them to ensure that they were still kosher (Mechilta DeRabbi Yishmael Parshat Bo).

The earliest physical pairs of tefillin that have ever been found were found in Qumran, the site of the Dead Sea Scrolls. Small leather pouches with four compartments and texts inside were found, some of them the same texts we use today and some variations like the Ten Commandments. Despite the fact that the Mishnah in Megillah (4:8) seems to suggest that sectarians made tefillin that were differently shaped, these seem to be in accordance with Rabbinic law, albeit smaller and not hard like our tefillin boxes today. I find it very powerful to see these tefillin, an early testimony to the Oral Law. 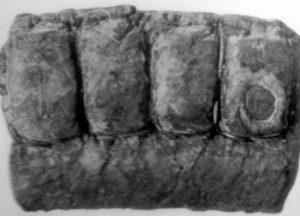 Did most men put on tefillin daily? Despite the rabbis’ exhortations about the importance of wearing them (“Rabbi Yehoshua says: An am ha’aretz is one who does not don tefillin” Berachot 47b), we have this revealing comment in the Gemara in Shabbat:

Did Jews neglect the mitzvah of tefillin, laying down their lives to circumcise their children and keep Shabbat but not to wear tefillin? It seems a harsh indictment. Professor Zeev Safrai says that perhaps the fact that we do not find many sets of tefillin in the Bar Kokhba hideout caves shows that indeed it was not a common practice, or it was laid aside in those dangerous days. He also points to the paintings in the Dura Europos synagogue (3rd century CE) where someone is reading from the Torah but not wearing tefillin. 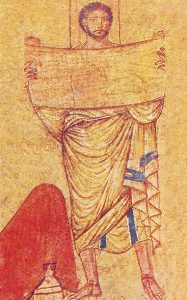 What about wearing tefillin all day? And on Shabbat? Shabbat is exempted because it is called an אות, a witness to God, just like tefillin is an אות. and you do not need two witnesses simultaneously. While there are mentions of rabbis and even common laborers (like on our daf) wearing tefillin throughout the day, it seems the rabbis may have wanted to limit that because of the necessity of keeping focused and clean while wearing tefillin. At some point tefillin for most people became something that is worn at morning prayers and then taken off. Although today we can see young men in the Old City of Jerusalem who wear tefillin all day, they are a very small minority. And perhaps this is what is going on with women as well. The issue is less that it is a time bound mitzvah, since women (especially Ashkenazi women) took upon themselves other time bound mitzvot like shofar, sukkah and lulav without any negative response from the rabbis. Rather, the rabbis seem to be saying, listen, tefillin has difficult requirements, we are restricting it for men, we don’t want to encourage it more than necessary.

The holiness of tefillin is the reason they cannot be left out in the field on Shabbat, perhaps ironically that same holiness limits the wearing of them to very specific circumstances despite the idea that are a constant witness to God and Torah. However, in the last few generations we see an encouraging trend of people who seem by outward appearance to be secular, making time to put on tefillin. Some of this is the result of the Lubavitcher Rebbe’s “Tefillin Campaign” where he sent shluchim out to the streets already in the 1960s to encourage men to put on tefillin, at a time when only the most Orthodox were doing so. Today tefillin is penetrating more and more sectors of society, bringing an ancient law back into the mainstream. 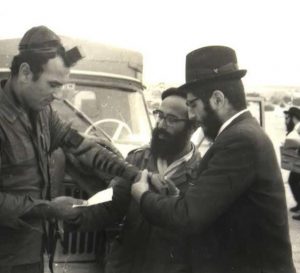