On Yevamot 64b we hear a story that took place in the synagogue of Maon, כנישתא דמעון. Rabbi Yochanan is asked a question about a circumcision that may be dangerous. The detail in the story- the name of the rabbi, the town and even the date (Yom Kippur that fell on Shabbat) – seem to indicate that the teller, Rabbi Yitzchak bar Yosef, was an eyewitness to the tale. Where is this synagogue?

The synagogue in Maon appears elsewhere in the Gemara, in similar contexts -people come to Rabbi Yochanan to ask him questions. It shows up in Hullin 97a where the question is about forbidden fat and in Shabbat 139a regarding burial on a Yom Tov. In Bava Kama 99b the question is about a monetary dispute. In all these stories the reader gets the sense that these are very real and practical matters, brought before the mara d’atra, the rabbinic authority in the town. They are not theoretical constructs but issues that the townspeople needed to deal with, and immediately, even if it was Yom Kippur.

Rabbi Yochanan is very familiar to us. He was a second generation Amora who made his home in Tiberias in the third century CE. But where is Maon? That is more of a puzzle. There are at least three places named Maon in Talmudic times. The one that we know the least about was probably the one in these stories. Above Tiberias was a town known as Bet Maon. Josephus mentions it and it appears in other places when the Gemara wants to explain the relationship between a high place and a low one (i.e., Bet Maon and Tiberias). It is also named by the medieval poet Elazar HaKalir as one of the cities that priests settled in, the home of the priestly order Hupa. All this is great literary information but unfortunately there no serious archaeological dig was ever carried out here. So far, Bet Maon’s synagogue, if there was one, remains unknown. However, since Rabbi Yochanan lived in Tiberias and in Zippori, both very close to Bet Maon, it would make sense that this was (one of) his local synagogues. 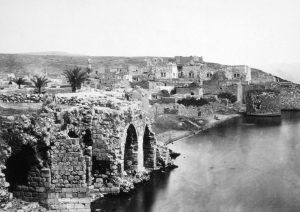 A view of Tiberias in the 19th century (Wikipedia)

What about the other two possibilities? There was a Maon in the southern Hebron Hills, part of the area known as Daroma, the south. In Mishnaic and Talmudic times there was a cluster of Jewish towns down here – Maon, Eshtamoa, Anim and what we call Sussya today (we don’t know its original name). The strong Jewish presence here was anomalous, since after the Bar Kokhba defeat most Jewish communities ceased to exist in the areas near Jerusalem. But here there were thriving communities with beautiful synagogues. One of the most interesting artifacts from this area comes from the Maon synagogue. It is a spectacular model of a seven-branched menorah, made of marble and about one and a half meters high (about four and a half feet). In fact, the menorah is a dominant theme in the synagogues of this area, and we find them in Sussya and Eshtamoa as well.

These communities also boasted many ritual baths, even though the Temple had been destroyed long before. Some scholars suggest that the predominance of Temple imagery (menorahs and other symbols) as well as the many mikvaot, indicate that these communities were largely populated by priests who hoped that the Temple would be rebuilt soon and they could return to Jerusalem. In any case, we definitely find a synagogue in this Maon, even though it is farther away from Rabbi Yochanan.

The final Maon is also intriguing. It was known from literary evidence like the Christian scholar Eusebius’ book of places in Israel (the Onomasticon) and it is also depicted on the Madaba map, a mosaic from a Byzantine church in Jordan that depicted the land of Israel. In 1957, when the young State of Israel was paving a road to remote communities in the western Negev, a fascinating find was uncovered. Its location fit beautifully with Eusebius and Madaba. It was a synagogue with an elaborately decorated mosaic floor. The floor featured “secular” designs like a leopard and a peacock as well as very Jewish symbols that included menorahs, a shofar and an etrog and lulav. 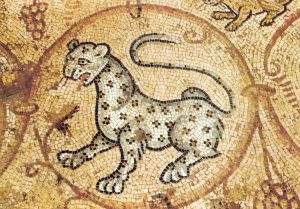 Part of the Maon mosaic (Wikipedia)

Of course the best design of all is an inscription and this synagogue included that as well. As so many inscriptions do, it thanked the generous donors of the new mosaic:

“Remembered for good are all the members of the community who made this mosaic and also Deshun, Tama and Yehuda who gave two dinars towards it.”

The mosaic was so impressive that the president at the time, Yitzchak Ben Zvi, commissioned a copy to be placed in the garden of his official residence in Rehavia: 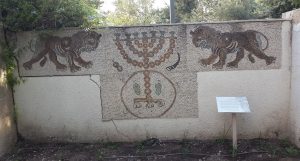 This area, which seems far from the center today, was important in Byzantine times. There were Jewish and Christian communities nearby and one, in Hirbet Shalal in today’s Park Eshkol, had a church with a mosaic similar to Maon’s. Perhaps the same (ecumenical) artist did both. The church was discovered by Australian soldiers during their stay here in World War I. They were so taken by it that they had it sent home to Canberra and today it adorns a war memorial there.

The original site of Maon became neglected and overgrown. It was uncovered again in 1980 but it was only in 2006 that the mosaic was taken for restoration. When it was returned a proper awning was placed over it and it was turned into a site that was easily accessible. The ancient synagogue is right next to a modern community called Nirim. It too has a fascinating history. 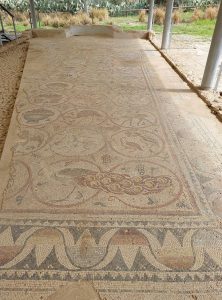 In 1946 the Yishuv in pre-State Israel decided to carry out a daring plan. They knew that if they did not create settlements, facts on the ground, in the Negev, any future division of the land between Jews and Arabs would give the land to the Arabs by default. There were two problems in building new communities: one physical and one political. The very real physical issue was a lack of water in the arid Negev desert. This was solved by laying a water pipe over two hundred kilometers, bringing water from springs in the northern Negev. However, the political issue was also very difficult. The British who ruled the land at that time heavily restricted new Jewish settlement. How to build if there were no permits?

Fortunately, the British law had an old Turkish period loophole. If a community had a fence and a guard tower, it was considered “built” and could not be destroyed. So Jews did overnight secret lightning missions, building what are known as Tower and Stockade communities. The most daring one took place on the night after Yom Kippur in October 1946. Eleven communities went up overnight in the Negev. The nation awoke to a new reality, Jews populating (barely!) the empty desert.

Nirim was one of those communities. However, this is not its original site. The first Nirim was to the west of us and played a crucial role in the War of Independence, holding back the Egyptian invasion. After the war the decimated kibbutz rebuilt a few kilometers to the east, in the site where it is today. A few years later they received greetings from the past, from the ancient Jewish community of Maon. 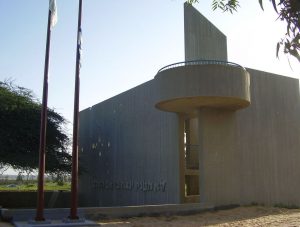