“Rabbi Yosei the priest and Rabbi Zekharya ben HaKatzav testified about a Jewish woman about whom witnesses testified that she was taken as security for a debt in Ashkelon.” (Ketubot 27a)

The terrible practice of debt bondage, where a person can be collateral for a debt, was practiced widely in ancient times. The Torah’s laws about an eved ivri, a Jewish slave, refer to a person being sold as a slave to pay off his own debt. Here the story seems to be referring to the Roman practice where another person can be given as collateral to ensure that a debt will be paid. The story, cited here and also in the Mishnah in Eduyot (8:2) takes place in Ashkelon, and the Gemara states clearly that this is a city “where the authority of the nations of the world is dominant over themselves,” i.e., a Gentile city. The story can be dated to the time of Rabbi Zecharya, a Kohen who lived at the very end of the Second Temple period. What do we know about Ashkelon and its residents? 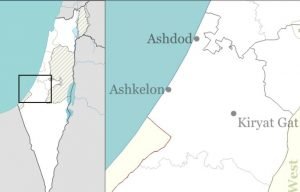 Ashkelon is an ancient city with ruins dating back thousands of years.  Situated on the southern coast of Israel, it is an ideal spot for trade. Archaeological excavations of the mostly preserved marketplace have discovered weights as well as goods that came from many lands. There was import (fish from Greece) and export (wheat from Judea) as well as all types of pottery from the simplest to very expensive and delicate pieces. The very name of the city testifies to its being a commercial hub – Ashkelon is derived from the word shekel, to weigh (and eventually the name of a coin). When David mourns for King Saul, he is concerned that the Philistines should not rejoice over his death and he says “do not tell it in Gat, do not exclaim it in the markets (חוצות) of Ashkelon.” The city was identified with its trade.

The first major inhabitants of the city were the Canaanites, often under the rule of the Egyptian empire. The Canaanites’wealth and sophistication allowed them to build a monumental entrance to their city: an arched gate. Until this gate and a similar one in Tel Dan in the north were discovered, it was believed that the Romans perfected the arch. However, this arch is at least one thousand years older than any Roman arches. 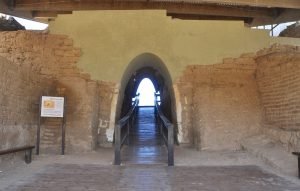 After the Philistines, the city was inhabited by the Phonecians and eventually became a Hellenized city like most others in the Ancient Near East. Greek culture ruled. The downtown had a large basilica and was filled with pagan statues of all kinds of gods and goddesses, among them Nike, Isis and Atlas. This pagan character is what makes the Gemara say that Ashkelon is a city ruled by Gentiles. In fact, in the Gemara in Avoda Zara, Ashkelon is cited as one of five cities with a permanent house of worship, where the gods are sacrificed to daily (Avoda Zara 11b). It is the only city on the list in the land of Israel. 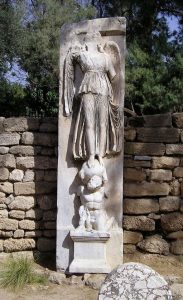 Nike and Atlas in the basilica (Abraham, Wikipedia)

Other stories about Ashkelon underscore its character as a pagan city that has some Jewish residents. One of the most famous Ashkelon stories is about how Shimon ben Shetach captured eighty witches in the city. On a less magical level, we have tales of Jewish-pagan conflict. Josephus tells us that during the Great Revolt in the late first century CE, many Jews in Ashkelon were killed by their Gentile neighbors. Another story, in Shir HaShirim Rabba, tells of two wealthy Jews who would regularly go on pilgrimage to Jerusalem. Their non-Jewish neighbors plotted to destroy their homes while the Jews were away but angels came to protect them.

Lest one think that all non-Jews in Ashkelon were evil, the Gemara brings the story of Dama ben Netina, a Gentile resident of Ashkelon who is considered to be the exemplar of how to respect your parents:

“Once the Sages wished to buy stones from him for the ephod of the High Priest . .  And the key to the chest holding the jewels was placed under his father’s head, and he would not disturb him. The next year the Holy One, Blessed be He, gave Dama ben Netina his reward, as a red heifer was born in his herd, and the Jews needed it. When the Sages of Israel came to him he said to them: I know, that if I were to ask for all the money in the world you would give it to me. But I ask only that money that I lost due to the honor of Father.” (Kiddushin 31a)

The status of Ashkelon as a primarily non-Jewish city continued after Roman and Byzantine times. It became an important Muslim city and then was conquered by the Crusaders who needed the coast for their ships. The city kept passing back and forth between Muslim and Crusader hands until it finally fell to the Mamelukes in the late 13th century and their ruler Baybars ordered it destroyed permanently. Pieces of the massive walls of medieval Ashkelon are still scattered around the beach and the archaeological site. One slab has a particularly fascinating story. It has Arabic writing on it and scrawled on top of the letters is a crest belonging to an English Crusader knight. The Christian literally wanted to erase the evidence of the Muslim. 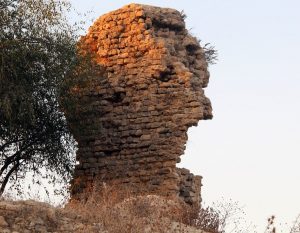 After Ashkelon’s destruction it stood largely empty for centuries. The trade powerhouse was reduced to a small fishing village. Only in 1948, when it was conquered by the new State of Israel, did Ashkelon begin to flourish again. Today it is a city of 150,000 residents, with a hospital, modern apartment houses and a mall called, what else, חוצות אשקלון, Ashkelon’s market.