Calling Out Around the World

As we begin the second chapter of Taanit, we start to get into the specifics of the public fast. The fasts discussed here are days of prayer that are called because of a crisis, usually lack of rain. The more people who participate and know about the day, the better. This participation emphasizes the idea that bad things happen in the world because of our sins and not arbitrarily, as Maimonides says in his Hilchot Taanit:

“And this thing is from the ways of repentance. For when a trouble comes and they yell out about it and sound [trumpets], everyone will know that it was because of their evil deeds that this bad was done to them.” (Mishneh Torah, Hilchot Taanit 1:2)

In light of all this, the first instruction we receive in this chapter makes sense:

“they remove the ark to the main city square and place burnt ashes upon the ark,“ (Taanit 15a)

Bringing the ark out to the public square is a way to involve everyone in the town and make sure that all the citizens are crying out to God and no one remains oblivious to the situation. Where is this most public place and where do we come across it in Jewish literature as well as in the Greco-Roman world?

The center of a town’s activity was different in different time periods. In Biblical times, if you wanted to do business, meet the townsfolk, sacrifice or have a judge hear your case, the place to go was the city gate. We hear about the gate in many different Biblical stories and allusions. Abraham buys the Cave of Machpelah from Efron the Hittite and the witnesses are the bystanders at the city gate. Hamor and Shechem go tell the townsfolk in Shechem of their deal with Jacob’s sons at the city gate. Boaz tells Ruth’s kinsman about her at the gate and the woman of valor in Proverbs has a husband who is known at the gate. The gate was also the place of (illicit) altars and sacrifices and we have found archaeological evidence of these bamot shaar, gate altars. 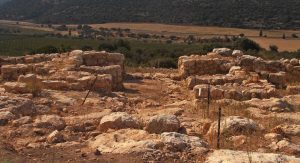 As we move into the Second Temple period gates and walls became less important. Cities were more open and there was less apprehension about letting traders and tourists into the town proper. Now the main gathering place was what the Mishnah calls רחובה של עיר, the public square. This seems to be a central open space in the middle of the town, something that we find in smaller places like Hirbet Itri in the Judean lowlands or in Korazim in the Galilee. It would be a logical gathering place for the market, for public announcements and for judgment. 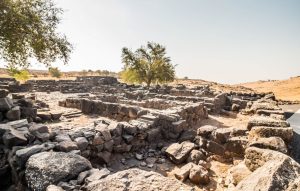 This public square seems similar to the Greek institution of the agora, which was not just a market but also a place to exchange ideas and news as well as to gather to worship. 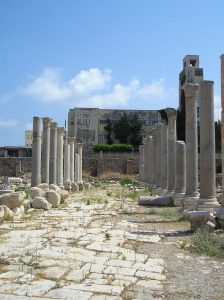 The Agora in Tyre (Wikipedia)

Moving the ark into the public square was a way of showing both solidarity of the whole town with the fast as well as how extreme and strange the situation is. The ark is in exile as the Gemara puts it (16a). It is also a way to hold more people than may possibly fit inside the synagogue. Are there other occasions where we hear about this public square in Jewish law? In contrast to the laws of fasting, the Mishnah in Bikkurim tells us of a happy situation where the public square was used:

“How were the bikkurim taken up [to Jerusalem]? All [the inhabitants of] the cities of the maamad would assemble in the city of the maamad, and they would spend the night in the open street and they would not enter any of the houses.” (Mishnah Bikkurim 3:2)

While the commentaries explain that the people slept outside in the public square so that they would not come into contact with impurity in the houses, there also seems to be a festive element at work. Everyone is going to Jerusalem, let’s make a public show of it and encourage more people to come. An echo of this idea is found in the famous midrash about Elkanah, Samuel’s father. The verse in Samuel I chapter one tells us that Elkanah would go up to the Tabernacle every year. The midrash embellishes this simple fact by explaining that Elkanah would make a big show of his aliya, so as to encourage people to join him, since the Tabernacle was neglected. He would take his whole family and they would sleep in the street in a town on the way to Shiloh. When people would ask where they were going, the answer would inevitably bring the questioners to want to join them.

Another fascinating reference to the public square is in the Mishnah in Megillah:

The principle of the Mishnah is that holiness can only go up, not down, i.e., you can only use money from one sacred object to buy something even more sacred. But the fascinating idea here is that the public square has holiness to begin with! Although this idea is eventually rejected by the Gemara (Megillah 26a) because it is only a temporary sanctity, it still tells us of the importance of the public space for community life.

The public square, while not as important as the permanent synagogue, can be assigned holiness through prayer, fasting and even as a way station on the journey to Jerusalem. One way to emphasize this holiness is by bringing the ark into the square. While we are used to thinking of the Torah ark as a permanent piece of synagogue furniture, in early synagogues this was not the case. The ark was a moveable feast, to quote Ernest Hemingway. We even have a carving of an ark on wheels, found in the ancient Jewish city of Capernaum/Kfar Nahum. For more on the moveable ark, see Flashback on Eruvin 86. 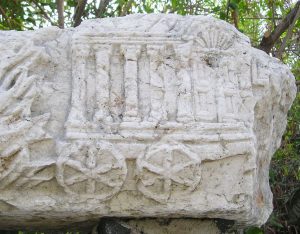 Permanent or temporary, outdoors or indoors, the need to cry out to God to save us from our troubles is still prevalent. Today mass prayer gatherings take place in synagogues but also at the Western Wall and even sometimes on the street, as a way to make the call even more public and powerful. 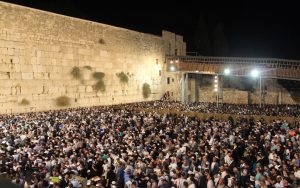