Can You Steal a Smell?

Just in time for Chanukah, this daf addresses many Temple related issues. The overarching question is what is considered meilah, making improper use of objects that are consecrated to the Temple. None of these are clear cut cases like taking money from the Temple treasury or gaining benefit from sacrificial animals. Instead, these cases are about much more abstract types of benefit. Through exploring these cases we get to hear about various aspects of the Temple, a perfect subject for the week of Chanukah.

Before we dive in, one word about meilah in general. The Temple was the site of enormous wealth, both physically (lots of money and precious objects) and in potential (the lucrative contracts for oil, wood, etc.). This is why we hear about Gentiles who come to plunder the Temple treasures, among them a Greek official of King Seleucus IV, the immediate predecessor to Antiochus IV of Chanukah fame. This official, named Heliodorus, does not succeed but others did. In addition, we have a huge problem in late Second Temple times of corruption in the Temple, with kohanim taking advantage of their access to the treasures. On this background, the laws of meilah seem not extreme but rather basic necessities, albeit necessities that did not stem the tide of corruption. 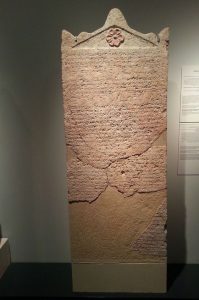 The Heliodorus stele, a Greek inscription that mentions Heliodorus, the king’s representative in Judea (Wikipedia)

The Gemara’s first situation is an intriguing one:

“They said about Rabban Yoḥanan ben Zakkai that he would sit in the street adjacent to the Temple Mount in the shade of the Sanctuary and expound to a large number of people all day long.”

Imagine a rock star lecturer, one who attracts an enormous crowd to hear him. That was Rabban Yohanan ben Zakkai, teacher of Rabbi Joshua and Rabbi Eliezer ben Hyrcanus and the most important rabbi of his generation. He was the one who saved Torah by insisting on moving scholars to Yavneh and setting up a bet midrash there after the Temple was destroyed. Now imagine Jerusalem on a hot July day. Where are all those people going to sit and hear Rabban Yohanan’s teachings without fainting from heat? They needed a shady place and the building of the Temple (the heichal or sanctuary in English) was large enough that at the right hour its shadow would create a large shady space. (Don’t worry about how all those people could hear the teaching, the world was a much quieter place then.)

I love this image. It gives us a real life picture of the Temple Mount, which was not only a place of sacrifices and ritual but of students and teachers. It also shows us the democracy of learning. Rabban Yohanan sat outside and taught to all comers. The rulings of the Sanhedrin were not hidden away in some elite chamber but were out in the open, for all to hear. It also implies that the sanctuary was tall and broad, The Mishnah in Masechet Middot tells us the dimensions of the heichal:

“The heichal was a hundred cubits by a hundred with a height of a hundred.” (Middot 4:6)

A hundred cubits (amot) high is approximately fifty meters, or one hundred and fifty feet, high. Just for comparison, the Dome of the Rock on the same site is only thirty five meters high. So Rabban Yohanan had a nice amount of shade (there are ways to calculate this but the math is beyond my pay grade). 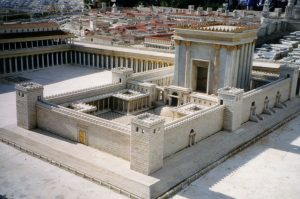 Model of the Second Temple (Wikipedia)

After determining that Rabban Yohanan ben Zakkai was not improperly benefitting from the Sanctuary building, since its primary use is the inside and not the outside, we move on to workmen doing repairs in the Holy of Holies. The Holy of Holies was the innermost part of the Sanctuary and was off limits to everyone except the high priest and even he could only enter on Yom Kippur. But what if the curtain between the Holy and the Holy of Holies had to be cleaned (it was sprinkled with blood every Yom Kippur)? Or something else needed to be repaired? The rabbis solved the problem by lowering workmen from the roof in special cages. This way they did not technically set foot in the Holy of Holies, and their sight of it was limited as well. Maimonides notes however that if repairs are necessary and kohanim and leviim cannot do them, an Israelite can enter and if no cage is available, he can enter in the regular manner.

A fascinating question is can one derive benefit from non-physical objects: smell, sound. The halacha regarding these ethereal benefits is not clear so the kohanim were extra careful. Regarding smell, we have the illuminating story of the kohanim of the House of Avtinas, who were tasked with preparing the incense (ktoret). They refused to teach anyone else the secret technique. The Gemara in Masechet Yoma first seems to say that their secrecy was so that they could make more money, by monopolizing the incense industry. However, it goes on to say that they were extremely careful not to personally benefit from the incense itself (even though they made money making it):

“Never did a perfumed bride emerge from their homes. And when they marry a woman from a different place, they stipulate with her that she will not perfume herself, so that cynics would not say that it is with the work of the incense that they perfume themselves” (Yoma 38a)

The Gemara continues and relates that they kept the technique of incense making to themselves so that the ktoret would never be used in a place of idolatry, especially after the Temple was destroyed. The Gemara concludes that what we earlier thought was greed we now know was an attempt to keep the techniques exclusive to the Temple.

Finally, we have a discussion about the used garments of the high priest. On Yom Kippur, unlike other days of the year, the high priest switches between two sets of clothing, his regular “gold” vestments, and the simple white ones. After Yom Kippur, he is not allowed to use the white ones again. The Gemara questions whether these garments need to be buried in genizah or merely passed on to regular priests. Regarding the old clothes of the regular priests, we have a timely piece of information, mentioned elsewhere in our sources. These clothes were not put in genizah but rather unraveled to be made into wicks for the menorah. Even the wicks had to come from consecrated items, and certainly the oil, which had to be made in purity and kept in purity. And on that note, happy Chanukah! 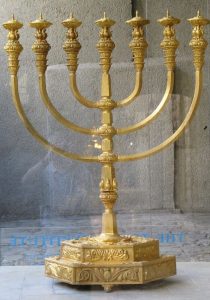