An old Jewish saying states הכל תלוי במזל אפילו ספר תורה שבהיכל – everything needs luck, even a Torah scroll. Why is one scroll used more than another? And why do some people and places become famous while others, equally significant, sink into obscurity?

I thought of this saying while researching the province of Cappadocia. While it had a significant Jewish population and in its heyday was counted among major Jewish centers like Babylonia and Alexandria, today it is virtually unknown. What do we know about Cappadocia and where does it appear in Yevamot?

In the midst of a discussion about accepting testimony about a man’s death, the Gemara tells us the following story:

“They told Rabbi Yehuda: There was an incident involving an armed bandit [listim] who was taken out to be executed in Megizat of Cappadocia, and he said to those present: Go and tell the wife of Shimon the Priest that I killed her husband as I entered Lod.” (Yevamot 25b)

Cappadocia is a province in what was called in ancient times Asia Minor. Today it is in Anatolia in Turkey and is a tourist magnet for its beautiful landscape and mysterious underground cities. 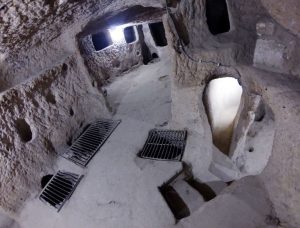 In Biblical times it was part of the vast Hittite empire and it seems that its name means “the place below” in the Hittite language. It became a Persian province at the height of the Persian empire around 500 BCE and many of its residents followed Zoroastrianism. While some later scholars confused it with Caftor, the island home of the Philisitines, that seems to be Crete, not Cappadocia. 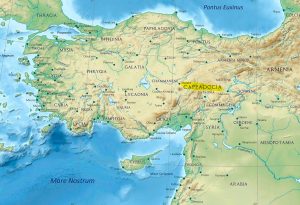 Later the Cappadocian kings became allies with the Romans and eventually it became a Roman province. Its capital was originally called Mazaka, or as the Gemara terms it Megizah, as we see here. When the area came under Roman control, the city changed its name to Caesarea of Cappadocia. Like its Judean counterpart, Herod’s city of Caesarea, it was named in honor of the Roman Caesar Augustus. Herod and the Cappadocian king Archelaus also had family ties – Herod’s son Alexander was married off to the king’s daughter, a useful way to have diplomatic connections. Today Caesarea has morphed into Kayseri, a similar name. 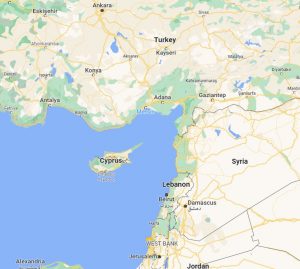 While Cappadocia was ruled by Romans and eventually became an important Christian center, it also had a significant Jewish population. When Rabbi Yohanan ben Nuri hears that Rabbi Tarfon only allows olive oil to light Shabbat candles, he stands up and defends the other Jewish communities who have less access to olives and olive oil:

The Jews of Cappadocia may have lacked natural resources but they are included in this list of the most significant Diaspora communities. We know of at least two rabbis from Cappadocia: Rabbi Judah and Rabbi Samuel. Jews also traveled back and forth from the land of Israel to Cappadocia. Among the ancient graves discovered in Jaffa is one from a Jewish Cappadocian merchant.

A very interesting testimony about Diaspora Jews, including the Cappadocians, appears in the New Testament. In the book of Acts there is an almost comic scene, where the students of Jesus, the apostles, start to speak in all different languages, despite not knowing these languages:

“Now there were staying in Jerusalem God-fearing Jews from every nation under heaven. 6 When they heard this sound, a crowd came together in bewilderment, because each one heard their own language being spoken. 7 Utterly amazed, they asked: “Aren’t all these who are speaking Galileans? 8 Then how is it that each of us hears them in our native language? 9 Parthians, Medes and Elamites; residents of Mesopotamia, Judea and Cappadocia, Pontus and Asia, 10 Phrygia and Pamphylia, Egypt and the parts of Libya near Cyrene; visitors from Rome 11 (both Jews and converts to Judaism); Cretans and Arabs—we hear them declaring the wonders of God in our own tongues!” 12 Amazed and perplexed, they asked one another, “What does this mean?”13 Some, however, made fun of them and said, “They have had too much wine.”” (Acts 2)

In this story, many Jews have traveled to Jerusalem for the holiday of Shavuot. The apostles, filled with the holy spirit, start to speak in tongues and each one spoke a different language. The foreign Jews are amazed to hear their languages spoken by these Jews from the Galilee, none of whom are learned men. Among the Jews from all over are a group from Cappadocia. So the journey, while it seems very far away, was one that was undertaken by some from this community to visit the Temple.

Travel went in the other direction as well. The Gemara brings stories about rabbis traveling to Cappadocia for various reasons. One, at the very end of Yevamot, highlights the danger that these journeys sometimes entailed:

“Rabbi Akiva said: Once I was traveling on a boat, and I saw a certain boat sinking at sea, and I was grieved over the apparent death of the Torah scholar who was on board. And who was it? Rabbi Meir. But when I disembarked at the province of Cappadocia, he came, and sat, and deliberated before me about halakha. I said to him: My son, who brought you up from the water? He said to me: One wave carried me to another, and that other wave to another, until I reached the shore, and a wave cast me up onto dry land.” (Yevamot 121a)

Rabbi Meir, who will finish his life in Asia (although not necessarily in Cappadocia) traveled there along with Rabbi Akiva and other scholars to teach and perhaps to learn as well. Cappadocia, like other vibrant Diaspora communities, contributed economically, politically and spiritually to the community in the Land of Israel. 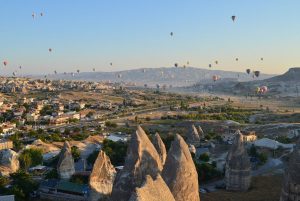 A landscape in Cappadocia (Rumeysaraz, Wikipedia)