Ah, the good old days, nothing like em! Are you kidding, progress is what’s great, who wants to go back to the dark ages?

These two approaches: nostalgia for the older simpler times and a belief that humanity is on a steady climb upward, have always been at odds in Judaism. The Talmud contains many statements about how if the ancients were like angels we are mere humans, or even animals. Yet the rabbis are clearly aware that in certain areas we have progressed, for example in abandoning the desire for idolatry. There is also the belief that each generation builds on the accomplishments of the previous one, a concept aptly described as dwarves standing on the shoulders of giants.

These different attitudes to past and present show up clearly in our daf. Which Temple was holier and more pure, the first or the second? The Gemara marshals arguments on either side but perhaps it is best to just say they were different. Let’s explore those differences.

The Gemara begins by discussing the quality of the kohanim in both temples. Whereas the entire span of First Temple times saw only eighteen high priests (a number derived from a list in Chronicles I chapter five, although Tosafot finds many problems with this number), Second Temple times had more than three hundred high priests. After subtracting the long reigns of righteous kohanim like Shimon HaTzaddik, the math works out to all the other high priests barely serving out a year of service before presumably dying in office. This fits neatly with other discussions we have seen and will see later in Yoma and other tractates, about the greed and corruption of some of the priests in Second Temple times. Their graft, nepotism and violence is attested to not only by the text of the Gemara but by the opulent homes they left behind. Anyone who could afford a beautiful home in the heart of Jerusalem (like the homes we see in the Herodion Quarter excavations) on a priestly “salary” had to have another source of income. Temple money, despite the stringent laws about meilah (benefitting from Temple goods) was easy pickings for the less scrupulous. However, they were punished by dying when they went into the Holy of Holies on Yom Kippur. Hence the great number of priests in a relatively short time span. 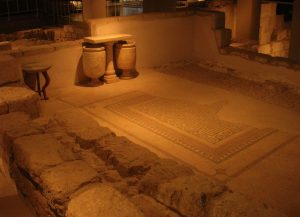 House in the Herodion Quarter (Wikipedia)

The Gemara goes on to discuss why the Tabernacle in Shilo was destroyed and then continues to the famous statement about the destructions of the First and Second Temple. And here is where we come to a fascinating dichotomy. The people of First Temple times committed the three cardinal sins that one should die rather than commit: idolatry, murder and sexual promiscuity. Doing these things would naturally lead to the Temple being destroyed. But the Gemara is baffled by how the Second Temple population sinned: “They were engaged in Torah learning, mitzvot and helping each other.” The answer? Baseless hatred, שנאת חינם. And didn’t the earlier generations also hate each other for no reason? No, says the Gemara, only the leadership but not the common people.

The paradox of a society riven by hatred, yet seemingly committed to Torah and mitzvot leads the amoraim Rabbi Yohanan and Resh Lakish to ask our question – who was worse? Before we look at their answers, it might be helpful to understand not who was worse but how were they different. If one could be transported back in time to Biblical times, it would be hard to recognize the Judaism of the people of Israel. However, going back to Second Temple times would look much more familiar to us. What was the difference between the Judaism of the two periods?

First Temple Israelites were one nation, all living in their land, with a communal identity. There were no Diaspora Jews and thus not so much difference between various groups. Yes, residents of the north might have certain customs or words foreign to their southern neighbors but they all shared the same land, language and history. Contrast that to Jews in Alexandria, Babylonia, Rome and the Galilee – different languages, rulers, climates and cultures.

First Temple worship was communal. Individual prayer was made in times of distress (like Chana in the Mishkan) but it had not yet been instituted as a daily rite. Sacrifices were brought on behalf of the nation on a daily basis in lieu of private prayer. There was only one legitimate place of worship, the Temple. Other temples were not acceptable, even if God was worshipped in them. Torah study was also not an individual value. The prophets taught the people what to do and they were either listened to or ignored. Even death was communal. You were laid out on a shelf in a family tomb and once your bones disintegrated, they were placed in the family bone place מאספה; you were literally gathered onto your forefathers. 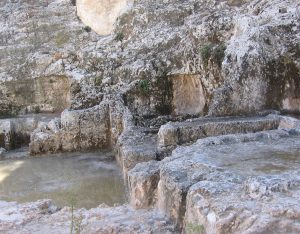 In Second Temple times the world had become more individually oriented. Individuals could and did pray on their own, using the Amida prayer instituted by the Men of the Great Assembly. Torah study was a prized value and scribes competed with priests to be the leaders of the nation. While the Temple remained primary, synagogues existed all over so that people could gather, study, discuss and pray. And burial became individual as well. No more family bone repository, each person’s bones were kept in a separate box called an ossuary. When the dead would be resurrected, you could be sure of having your own bones and not someone else’s! 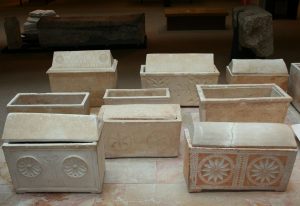 A collection of ossuaries (Wikipedia)

To return to Rabbi Yohanan and Resh Lakish’s question: Resh Lakish claims that the later generations, the Aharonim, are greater because despite persecution they still engaged in Torah study.  Rabbi Yohanan on the other hand praises the early generations, the Rishonim, because clearly they had merit or else the Temple would not have been rebuilt. The primacy of Torah study in the eyes of Resh Lakish fits well with the trend of Second Temple Judaism (and later). But Rabbi Yohanan wants to go back to the early days, when life was simpler and centered around the Temple. And how can Torah study be righteous if the ideals of social justice are not followed?  Who is right? And where does our generation fit in? 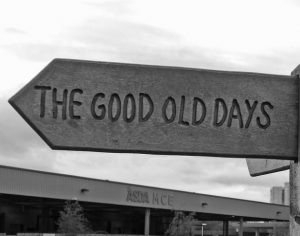