“If a man spent Shabbat in  . . . a cave, even though it was like the cave of Zedekiah king of Judah, he may walk through the whole of it and two thousand cubits beyond.”

The daf is obviously talking about a very large cave. What is the cave of King Zedekiah? Rashi explains that it was a cave through which Zedekiah, the last king of Judah, escaped from the Babylonians. The escape is mentioned in the book of Jeremiah, chapter 52. Zedekiah and his soldiers escaped from Jerusalem after the Babylonians breached the wall of the city. He was captured near the plains of Jericho. But there is no cave mentioned in the text.  Rashi again comes to our rescue (here, and with more detail in Ezekiel 12: 13) by telling us about a huge cave that stretched from Zedekiah’s house until the plains of Jericho. He used it to escape from the palace, and emerged by its exit near Jericho. The soldiers had chased after a deer who ran along the top of the cave, leading them to the king who emerged just as they reached the exit.

Where is this cave? Clearly it was known in the time of the Tannaim. And indeed we come across mentions of Zedekiah’s Cave from the time of the Gemara, through the Middle Ages and up until modern times. Today you can go to the Old City, near the Damascus Gate and go into Zedekiah’s Cave which was rediscovered in 1854 after having been “missing” for centuries. 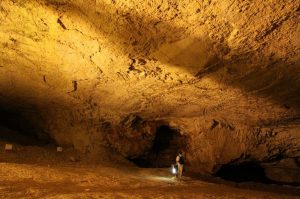 Main room of the cave (Wikipedia)

While the cave is associated with Zedekiah (and occasionally mixed up with the underground tunnel built by Hezekiah – oh those confusing kings of Judah), on closer examination the story does not connect. First of all, the cave is a dead end. Rather than being a tunnel from Jerusalem to Jericho, it begins near Damascus Gate and goes underneath the Muslim Quarter and ends with a wall. It would make a good hideout but a poor escape route. Second, the cave is clearly not a natural cave but a quarry – you can see exactly how the stones were cut out of the bedrock. Rashi is following the midrash but that cave is clearly not this one. However, the cave the Gemara is discussing does fit with the enormous Zedekiah’s cave we are familiar with. It is certainly enormous. Although its length is only about three hundred meters, more or less six hundred amot, its area is over nine thousand square meters.

If Zedekiah is not the one who made or used the cave, who is? The quarry took out massive stone blocks of high quality Jerusalem stone. Which builder would have used them? For the Freemasons, who explored the cave in the late nineteenth century, the answer was easy – their hero King Solomon. He was a master builder who built the Temple so he must have needed all that stone. They were so taken with the site that they held their annual meetings there.

Unfortunately for the Freemasons, it is now clear that the quarrying in the cave was done not in First Temple times – knocking out King Solomon and King Zedekiah – but in Second Temple times. The techniques fit perfectly with what we know about Second Temple period masonry and we have THE builder of Jerusalem to thank for them, King Herod. The cave, which started as a small natural cave, was expanded and expanded to become a cave so large that chances are good it was known to the rabbis of the Gemara. 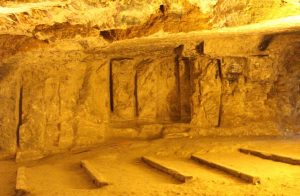 How was the cave rediscovered? When the Ottoman Turks rebuilt the walls around Jerusalem in the sixteenth century, they closed the entrance to the cave for security reasons. From then on, the cave took on an almost legendary aspect – people knew it existed but didn’t know where it was. One day in 1854, an English explorer named James Barkley was walking his dog when the dog disappeared. He followed the sound of barking to . . . an opening in the ground that led to a vast chamber. He returned later that night to explore the cave under cover of darkness and realized that this must be the legendary Zedekiah’s Cave.

The cave was explored and opened, then closed again intermittently during the vicissitudes of the twentieth century. Today it is open as an amazing tourist site although no one lives in it, just as the Gemara says about the cave in their time. 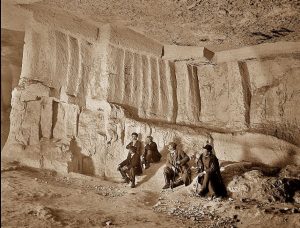 Speaking of which, did people actually live in caves in ancient times? We have evidence of caves used by people in many places in Israel, from the Galilee down to the hills near Bet Shemesh.  Caves were climate controlled as well as places that were hidden when invaders came. They were used for storage, for cisterns and mikvaot and sometimes even as dwellings, although that was not typical. In Sussia in the Southern Hebron Hills each home had an underground area, both as a refuge from the harsh desert climate as well as security from bandits. 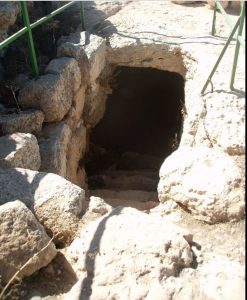 Entrance to a cave in Sussia (Wikipedia)

We don’t know if the rabbis in Eruvin were talking the cave that we know of near the Damascus Gate. Perhaps they knew about Zedekiah’s real escape route and we will find that one day as well. Meanwhile, you can visit Zedekiah’s/Solomon’s/Herod’s cave and be awed.