Chametz, Shatnez and Going Around the Vineyard 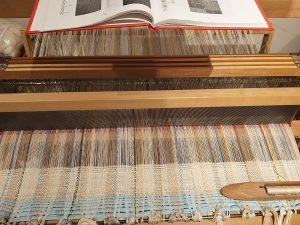 On Pesachim Daf 40, some interesting discussions of real life scenarios show us the extent to which we must consider our actions and their possible consequences.  There was a boat carrying wheat, and it capsized in the river.  The concern is that the wheat is now potentially going to leaven due to contact with water.  Rava proposed that one could sell this wheat to gentiles, but not to Jews.

But then Rabba bar Levai objected, showing that Rava holds more stringently in a comparable case of a garment that might be shatnez. Basically, a linen string gets lost while weaving a wool garment so the status of the garment (like the wheat) is unclear.  In that case, Rava does not permit one to sell the garment even to a non-Jew or make it into a saddlecloth for a donkey.   The fear is that the gentile might at some point resell this material to a Jew.  Rava does allow one to use the potentially compromised fabric to cover a dead body, believing that no one will remove the shroud from a dead body out of respect.

In light of the valid concern that the gentile will later sell the grains from the boat to a Jew, Rava changes his mind, and permits the merchant to sell only small quantities of the grain quickly to different Jews who will most likely use it before Passover.  Interestingly, it does not say in the text of the Gemara that the merchant has to inform the buyers that the product is possibly chametz.  However according to a note in the Koren Steinsaltz Talmud, the later commentators do hotly debate this issue.  I think I certainly would want to know!

Rava, who on this same page holds that the grains for matzah must be watched from the time of harvesting, challenges us to think several steps beyond our immediate actions.  While it may be easier or more convenient to assume that nothing will happen if we do something “borderline,” we should try to follow our actions to their logical ends.  Just a few lines later, in another discussion about soaking grains in vinegar, Ulla insists on being very stringent to avoid any possible consumption of chametz.  He quotes, “Go around, go around and do not approach the vineyard, they say to the Nazirite.”  Because a Nazirite is not supposed to drink wine or eat grapes, it is best for him to avoid the vineyard altogether.

Many times we have the opportunity to put one more step in between a person and something that they should not do…whether it is stopping yourself from eating the whole box of cookies or protecting children from negative influences.  Of course, there is a limit to what we need to anticipate (for example, stealing clothes from a dead body). But there may be room to act a bit more like Rava’s very careful mother and keep our eye on things.