Rabbi Hanina bar Hama said . . . were it not for the priestly vestments, there would not remain a remnant [sarid] or survivor from the haters of the Jewish people (a euphemism for the Jews), (Yoma 72b)

The last Mishnah of the seventh chapter of Yoma deals with the special clothes worn by the regular priests and by the high priest. This statement on Yoma 72 offers us a glimpse into the importance of these clothes. Rashi explains the statement in a very practical way – if the priest did not wear his clothes, he could not bring the sacrifices that atone. However, it could be that Rabbi Hama bar Hanina is alluding to a more complicated idea. In the Gemara in Arachin (16) as well as in other places, we have a detailed calculus of how each garment atones for a particular sin. Since each item covers a particular body part, it also atones for a sin related to that part. Pants atone for sexual sins, the tunic (כתנת) for murder since Joseph’s tunic was brought back to Jacob covered in blood. The hat, which is high, atones for arrogance and the belt, tied below the chest, atones for wayward thoughts of the heart. As for the high priest’s garments, they also have special functions: the ephod atones for idolatry since an ephod was an idolatrous accessory in ancient times, the choshen atones for bad judgment and the tzitz on the forehead atones for brazenness (a forehead is a מצח  and brazen behavior is עזות מצח). The most interesting one is the coat, the מעיל. It makes noise when the high priest walks since it has bells on the hem, therefore it atones for something else that makes noise: malicious speech.

This clever analysis of the priestly garments emphasizes their importance in the Temple and in the eyes of the people. What do we know about these clothes and what they looked like?

The high priestly garments elicited awe from anyone who saw them. Here is part of the description given in the letter of Aristeas, a Hellenistic (3rd-2nd century BCE) document written in Greek about the Jews, presumably by a Jew:

“We were greatly astonished, when we saw Eleazar engaged in the ministration, at the mode of his dress, and the majesty of his appearance, which was revealed in the robe which he wore and the precious stones upon his person. There were golden bells upon the garment which reached down to his feet, giving forth a peculiar kind of melody, and on both sides of them there were pomegranates  with variegated flowers of a wonderful hue. He was girded with a girdle of conspicuous beauty, woven in the most beautiful colours. On his breast he wore the oracle of God, as it is called, on which twelve stones, of different kinds, were inset, fastened together with gold, containing the names of the leaders of the tribes, according to their original order, each one flashing forth in an indescribable way its own particular colour. On his head he wore a tiara, as it is called, and upon this in the middle of his forehead an inimitable turban, the royal diadem full of glory with the name of God inscribed in sacred letters on a plate of gold . . .”

Josephus, Philo and even Roman writers also commented on the splendor of these garments. In fact, the high priest’s clothes probably lent the Romans the impression that he was the “king of the Jews.” In ancient times only a king or a very wealthy individual would wear clothes with this plethora of color.  Color was made from animal and plant dyes and was very expensive. Only the most elite would wear such things. Purple and blue earned the adjective royal because of this reason. The high priest’s garments included purple, blue and red, all expensive dyes, as well as the gold of the bells and gold thread as well. 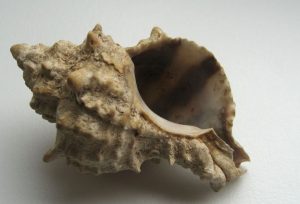 Murex Trunculus from which purple and blue are made (Wikipedia)

Despite the impression the clothes made on observers, we do not have much detail in Rabbinic sources about the appearance of these items. In fact, Rashi in his characteristically modest way, writes in his commentary about the ephod (Shmot 28:4) “I have not heard nor found a Baraita that describes this but my heart tells me that it had a belt in back. . .” Medieval commentaries interpreted the biblical verses to fit the clothes that they were familiar with. A striking example is the Rashbam, in medieval France, who says that the me’il has an opening at the neck like the garments of the “galachim,” i.e., the Catholic priests (Shmot 28:32).

Do we have any remnants of these clothes today? Dyed fabrics have been found in the Bar Kokhba caves in the Judean Desert. This indicates to us that even the wealthy (although not the high priest since the Temple had been destroyed by then) took part in the revolt and were refugees. A find that is more closely connected to the Temple and the high priest is a small golden bell that was found in the excavations below the main street of Second Temple Jerusalem. Coming up from the Shiloach pool and continuing alongside the Western Wall of the Temple Mount was a monumental stepped street. Below it was a sophisticated sewer system which is being excavated today. Among the many fascinating finds was a bell which still had a small circle attached to it so that it could be sewn onto someone’s garment.  Could it be that this was one of the bells attached, along with cloth pomegranates, to the hem of the me’il of the high priest? And if it is, did it fall off in the Temple, the only legitimate place to wear these clothes, and end up in the sewer system when the day’s blood was washed away? We will never know but just finding it provides a glimpse into the past.

Me’il made by the Temple Institute, note the gold bells on the hem (Wikipedia)

One of the most fascinating aspects of the Yom Kippur service is the quick changes that the high priest has to keep making between these glorious colorful clothes and his simple (albeit expensive) white clothes. He could be a fashion model with all of these clothing changes! Why does he need to do this? Rabbi Meir Schweiger offers a beautiful explanation. He says that the two types of clothes present two aspects of the high priest’s mission. He is like a king, representing the Jewish people before God. As such he needs to dress like a king in elaborate expensive garments that literally carry the names of the tribes of Israel. But when he enters the Holy of Holies, he comes not as a king but as a humble servant before his Master. Here he must wear the pure, simple white of the ‘עבד ה, the God fearing Jew. Like the high priest, we too must switch between roles – we are kings of creation and must take our responsibilities seriously, ruling the world with wisdom but not with arrogance. But we are also servants of God and must recognize His supremacy. A difficult but essential balancing act.