Coin of the Realm

Now that we are a week into the complexities of Masechet Shekalim, it is time to take a look at donations, money and coins in ancient times. Perhaps the most important thing to understand is that when the Torah speaks about the half shekel donation, it is NOT talking about a coin as we (and the Mishnah) imagine it. There were no coins before at least the seventh century BCE. So what does the Torah mean with this commandment:

This is what everyone who is entered in the records shall pay: a half-shekel by the sanctuary weight—twenty gerahs to the shekel—a half-shekel as an offering to the LORD. (Shemot 30:13)

We will return to the shekel hakodesh/sanctuary weight later. But first, the Torah is talking about weight, a specific weight of silver. Commerce in Biblical times did not use coinage and certainly not bills. These are more sophisticated financial tools that only evolved centuries later, at least in our part of the world. Commerce was first conducted through barter (“I’ll give you ten cows for that piece of land”) and then through weighing out amounts of precious metals, which had value. There were also formed ingots that people used as money. The word shekel is from the root to weigh, לשקול, meaning it is a unit of weight and not a coin. In fact, the city of Ashkelon’s name comes from the same root because it was a place of thriving international commerce.

Let’s look at some examples. When Abraham goes to buy land for Sarah’s grave, Efron the Hittite tells him the price for the Machpelah cave: four hundred weight of silver שקל כסף. Abraham does not blink and hands over all the money without any bargaining. How much money is that? A four hundred shekel weight discovered in Tel Bet Mirsim and displayed in the Israel Museum weighs four and a half kilograms. Silver today goes for about eight hundred dollars a kilogram, so this was a hefty sum.

When Achan steals from the spoils of the battle of Jericho, among the items he took is a לשון זהב, a tongue-shaped piece of gold. And when Jeremiah buys a field from his cousin Hanamel, he weighs out the silver for payment:

I bought the land in Anathoth from my cousin Hanamel. I weighed out the money to him, seventeen shekels of silver. (Jeremiah 32:9)

Perhaps the most intriguing weight found in Israel is a small stone that says on it clearly in ancient Hebrew letters the word פים, pim. The first one was found in Tel Gezer about a century ago, more have been found since. No one would know what that is if we did not have a verse in the book of Samuel explaining that the price of fixing metal tools was a pim, a beautiful example of archaeology explaining Tanakh and vice versa:

The charge for sharpening was a pim for plowshares, mattocks, three-pronged forks, and axes, and for setting the goads. (Samuel I 13:21) 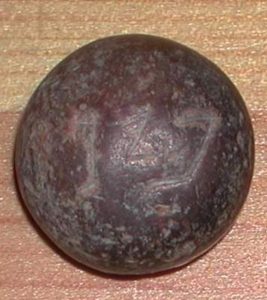 When the Mishnah and the Gemara speak about coins in the time of Moses and the desert, they are projecting their own reality on the past. The first coins that we have discovered in our area are from seventh century BCE Anatolia. The first coins to appear in Eretz Yisrael are about a century later. By the Persian period (5th -3rd centuries BCE) coins were commonplace everywhere. There were Phonecian coins, Greek coins and even coins minted by the Judeans that said Yehud on them. The Hasmonean kings minted their own coins as a sign of power and sovereignty, as did Herod of course. Interestingly, because of the taboo on imagery in Second Temple times, Judean coins had no human or animal images on them, only flowers, stars, cornucopia or Jewish symbols like a menorah. This was in stark contrast to Roman coins which displayed the king’s likeness on them. Today many modern Israeli coins use designs from ancient coins.

By the time we get to the Mishnah, and by the Second Temple period it depicts, coins were in widespread use. But what were those coins worth? Let’s take a look at some relative values.

The smallest coin of value was a  peruta. Its weight was equal to one barley seed. If something is not even worth a peruta, you cannot make a transaction with it. Perutot are the most common coins found in archaeology, presumably because people did not bother to pick them up.

There are eight perutot in an issar and twenty four issarin in a zuz, also called a dinar. If you are still with me, let’s keep on with the math. A shekel is equivalent to two zuzim, the price of Abba’s goat in the haggadah. So half a shekel should be one zuz, right? Wrong. The rabbis created the concept of שקל הקודש, a holy shekel, worth twice as much. So a shekel hakodesh is four zuzim and half of that is two zuzim or 384 perutot.

Even when we know the relative value of the coins to each other, coin worth fluctuated across the Jewish world. Some mints were reliable and others were more dodgy, mixing the metals in the coins so that they had a lower proportion of silver. In order to make sure that everyone brought coins of equal value to the Temple, there was only one coin worthy of being used for the half-shekel tax: a שקל צורי, a shekel minted in Tyre. The Tosefta in Ketubot chapter 12 states: Any silver that the Torah speaks of is always Tyrian silver. The Tyrian mint was considered particularly reliable so that the coins were known to be pure. They looked like this, with a figure of a local god on the front and a vulture on the back: 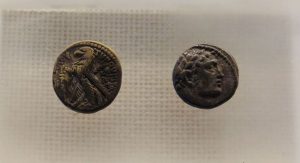 Tyrian shekels have been found in various sites around Israel, one was just reported on today from an excavation in the Tower of David in Jerusalem (https://www.jpost.com/archaeology/coin-from-2nd-temple-mount-era-found-during-tower-of-david-conservation-663456). Perhaps more intriguing is a discovery made a few decades ago in Ein Gedi. Here archaologists found a cache of smaller coins that when added up equaled the value of the half shekel plus the kolobon, the surcharge the Mishnah discusses. This is a lovely example of what the Mishnah is referring to (Shekalim 2:3) when it discusses a case of gathering coins for the half shekel. Here was a farmer who was not wealthy. He slowly put aside coins over the course of the year until he had enough to pay his half shekel to the Temple. And why were the coins still in Ein Gedi and not transferred to the Temple? Yaakov Meshorer the numismatist suggests that this hoard was collected right around the time of the Great Revolt. By the time the farmer had enough money, he had heard the tragic news that the Temple was destroyed. He could not bring himself to use the money and so left it for us to discover centuries later.