The final two chapters of Yevamot move away from the headsplitting puzzles of brothers and sisters and children and mothers and into a more painful story – people who are lost and presumed dead. Unfortunately, these stories happened with far greater regularity than five brothers married to five sisters, and the Sages had to figure out when and on whose testimony to allow a woman to remarry. Even today, with our (relatively) safe travel and the many avenues of communication open to us, people still go missing. Imagine the situation in a time when it could take months for a message to get from place to place, there was no fingerprinting or DNA testing and no official records of people.

The Mishnah begins many of these cases with people visiting the “medinat hayam,” what the Steinsaltz translation calls overseas and we today would call abroad. While leaving the Land of Israel did not always involve sea travel, this was shorthand for a trip out of the country. The yam, or sea, always refers to a particular sea. Today is is called the Mediterranean, which means the sea in the middle of the lands (continents).The Romans called it Mare Nostrum, our sea, and the Jews called it the Great Sea הים הגדול – as it was the largest sea that people in the Ancient Near East were familiar with. The sea played a large role in the lives of people in Judea and the Diaspora, what can we learn about it from our sources? 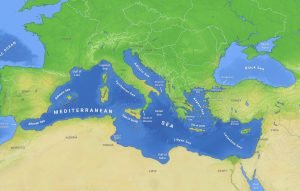 The Bible is replete with metaphors related to the sea, signifying power or infinity. Beyond the sea is the furthest possible place, as in this statement from the book of Devarim, explaining how the Torah is accessible and not far away:

“Neither is it beyond the sea, that you should say, “Who among us can cross to the other side of the sea and get it for us and impart it to us, that we may observe it?”“ (Devarim 30:13)

Similarly, when we want to get rid of something, we ask God to send it to the depths of the sea, where it cannot be retrieved:

The sea is also unimaginably large and a powerful metaphor for infinity:

In fact, the sea is so great and awesome that there is a blessing that one says upon seeing it:

“Rabbi Yehuda says: One who sees the great sea recites a special blessing: Blessed…Who made the great sea.” (Mishnah Berachot 9:2)

The Mediterranean was a symbol of power and almost infinite distance in antiquity. But even travel on more modest bodies of water could prove dangerous. This is the discussion of the Gemara on Yevamot 121 – is a person who was seen falling into the water presumed drowned or can we hope that he emerged further away? The answer lies in the size of the body of water – can one see all parts of the shore or not? 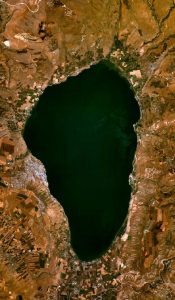 The Sea of Galilee – water with a visible end (Wikipedia)

We hear two stories about rabbis who were presumed dead after falling into the water but were miraculously saved (Yevamot 122). Did the rabbis, and did Jews in general, sail the seas? It would seem so. We have quite a few stories about rabbis on the road (see Flashback  for Eruvin 36  https://hadran.org.il/author-post/rabbis-on-the-road/) and some of them travel by ship. The generation of Yavneh in particular seems to have traveled frequently, whether to intercede with the emperor in Rome or to provide guidance to Jewish communities abroad, as Rabbi Akiva and Rabbi Meir are doing on our daf. We even have a story about building and using a sukkah on board a ship:

“There was an incident involving Rabban Gamliel and Rabbi Akiva, who were coming on a ship. Rabbi Akiva arose and established a sukka at the top of the ship. The next day the wind blew and uprooted it. Rabban Gamliel said to him: Akiva, where is your sukka?” (Sukkah 23a) 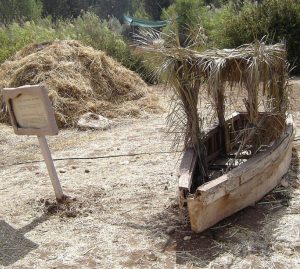 A sukkah on a boat at Neot Kedumim (Wikipedia)

In a different story, Rabban Gamliel is almost killed when there is a great storm while he is on board a ship:

“And even Rabban Gamliel, was coming on a boat at the time, and a large wave swelled over him and threatened to drown him. Rabban Gamliel said: It seems to me that this is only for the sake of Rabbi Eliezer ben Hyrcanus [who Rabban Gamliel had ostracized for not following majority rule]. Rabban Gamliel stood on his feet and said: Master of the Universe, it is revealed and known before You that neither was it for my honor that I acted, nor was it for the honor of the house of my father that I acted; rather, it was for Your honor, so that disputes will not proliferate in Israel. In response, the sea calmed from its raging.” (Bava Metzia 59b)

Jews not only traveled on ships, they were sailors and even owned fleets of ships. In a discussion about the merits of various professions (Kiddushin 82a), the Gemara states that most sailors are pious. Rashi explains that this is because they are often in dangerous situations and that causes them to fear God, a version of the idea that there are no atheists in foxholes. When the Gemara in Yoma (25b) wants to give an example of a very wealthy person who still found time to learn Torah, they talk about Rabbi Elazar ben Harsom, whose father bequeathed him one thousand ships. We even have depictions of boats on ancient Second Temple period coins and in a tomb found in Jerusalem called Jason’s Tomb. Was the patriarch of the family a sailor? A ship builder or shipping magnate? We do not know, but we do see that Jews had a familiarity with the sea and ships. 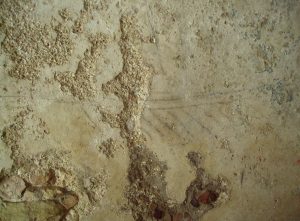 The ship drawn on the wall at Jason’s tomb (Wikipedia)

And with these thoughts on ships and the sea, we finish crossing the vast sea that has been Masechet Yevamot. See you again in seven and a half years! 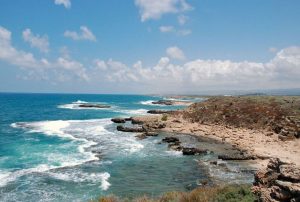