Hebrew readers know that in order to learn how to read, the vowels, nikud, under the letters are essential. As you become more proficient you can sight read and the vowels become less important, although there are still some tricky words that need to be sounded out with vowels. But what if you had to learn to read Hebrew without your trusty kamatz and patach? That was the situation in the world for many centuries. Our Gemara relates how ancient the pronunciation and spelling of the Torah are:

The terms used here are defined by the RaN: mikra sofrim (vocalization) is how we pronounce the words, which may be different in different contexts. Itur sofrim, the ornamentation of the scribes, are words that are added or placed out of order to enhance the beauty of the text. And then there are words that we write but do not read out and words that we read but are not written.

The vast amount of information alluded to here has two distinct qualities: it is ancient (halacha leMoshe miSinai, dating back to the giving of the Torah) and it is oral. Vowels, punctuation, and other signs of how to read are not written into the text. If you look at a Torah scroll that we read in synagogue today, it is only the words, with no additional notations. To learn the tune and the pronunciation the reader uses a book called a tikkun which includes the vowels and the notes. 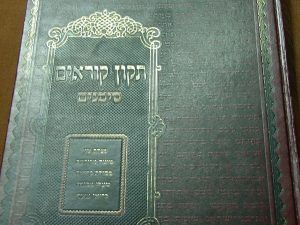 At what point did a written system of vowels and notes enter the text? We date our traditional system, called the Masorah, to scholars in Tiberias who created it sometime between the 6th and the 8th centuries. There were other systems in other places but the Tiberian one is the one that caught on. These scholars, known as Masoretes, developed the vowel signs we use today and the symbols we use for the cantillation, the tune that the Torah is chanted in. But they did more than that. As the Gemara in Kiddushin explains, a sofer or scribe’s name is derived from the same root as to count, ספר.

“Therefore, the first Sages were called: Those who count [soferim], because they would count all the letters in the Torah,” (Kiddushin 30a)

These Masoretes counted words: how many times a word is written out fully, with the letter vav, and how many times without. How many large letters are in a Torah scroll and how many tiny ones. Where is the midpoint of the Torah in words and how often does a certain phrase appear. Computations that today can be done in seconds with a computer took lifetimes to compile but were considered important both in transmitting the text and understanding it.

Why did the Tiberian scholars create vowel and music signs? They were known to be exacting in their diction and pronunciation so it was an issue close to their hearts. In addition, piyyut, religious Hebrew poetry, also took off at this time, so proper pronunciation and tunes were essential to that as well. It also seems that a Karaite community developed in Tiberias. Karaites, who rely solely on the Biblical text for their law and reject Rabbinic Oral law, are very particular about how their texts looked and were preserved. Some scholars suggest that the most important Masorete families were Karaites.

A sculpture of the vowels in modern Tiberias (Wikipedia)

The Ben Asher family and the Ben Naftali family were the expert Masoretes. Aaron ben Moshe of the Ben Asher family was involved in the commission of a codex of the Hebrew Bible that was considered the most accurate of its time. This book, which had a long and troubled journey through the centuries, was known as the Aleppo Codex. It was the book that Maimonides used when he wrote his own personal Torah scroll:

“The scroll on which I relied on for [clarification of] these matters was a scroll renowned in Egypt, which includes all the 24 books [of the Bible]. It was kept in Jerusalem for many years so that scrolls could be checked from it. Everyone relies upon it because it was corrected by Ben Asher,who spent many years writing it precisely, and [afterward] checked it many times. I relied [on this scroll] when I wrote a Torah scroll according to law.” (Mishneh Torah, Hilchot Sefer Torah 8:4)

The codex was written in Tiberias, brought to its owner in Jerusalem and then captured during the Crusades. The Jews of Egypt ransomed it and brought it to Egypt, which is where Maimonides saw it. Eventually it ended up in the Great Synagogue of Aleppo in Syria where it was kept as a talisman, seen by few people. With the outbreak of the War of Independence in Israel, the Codex was smuggled out of Syria and part of it was brought to Israel where it resides today. But part of it mysteriously went missing and has yet to be found. 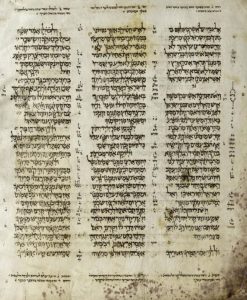 A page from the Aleppo Codex (Wikipedia)

Today many books published in Hebrew, particularly Torah books, have vowels, However, most older texts do not and it is often hard to read and decipher all the words. A new computer program aims to be the modern version of the Tiberian Masoretes. Created by Professor Moshe Koppel and Dr. Avi Shmidman, Dicta offers a series of tools (free) to help in Bible study. One of them allows you to copy any rabbinic text and the program will add the vowels, making it infinitely easier and quicker to read. This is called the nakdan pro:

From the beach in Tiberias to the computer labs of Bar Ilan University, vowels have evolved and help us to learn Torah better. Thank you Masoretes!