Down in the Valley

We have been talking a lot about blood for the past few days. Sorry to all the squeamish folks out there but blood and guts were a large part of the Temple service. However, despite this earthiness, the Temple area needed to remain clean and neat. What happened with all that blood? The Mishnah on daf 58b tells us:

In other places in the Gemara we hear about how the priests would plug up the drains in the Azara, flood the area with water and then open the drains and let it all flow out, taking the blood and dirt with it. In our Mishnah we learn where it flowed to – the Kidron Valley. What do we know about this valley and what is it’s significance?

To understand what is happening here, we need to know a little about the topography of Jerusalem. The Kidron Valley is a deep valley situated to the east of the Temple Mount, between the Temple Mount and the Mount of Olives: 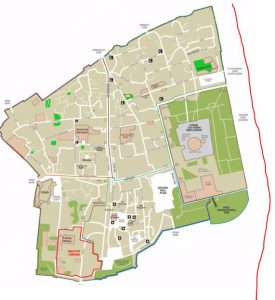 Old City with the Kidron marked in red (Wikipedia)

It runs north-south while in Jerusalem, and once it gets to the desert it switches course and turns to the east, ultimately flowing into the north part of the Dead Sea after passing south of Maale Adumim and through the Horkanya Valley.

Route of the Kidron marked in red (Google maps)

The Kidron is below the Temple Mount and it is the valley closest to it so it is logical that it is the drainage valley. The Mishnah continues and informs us that there were gardens here. The Tosefta in Menachot (10:5) tells us that the barley for the Omer offering came from the fields in Nahal Kidron.We already hear about gardens in the Kidron in First Temple times. The book of Kings mentions these gardens as the place below the Shiloach pool where the residents escaped during the Babylonian attacks, calling them the King’s Gardens. The association to a king seems to be King Solomon who writes about the gardens he cultivated. This was a fertile place, partly because of this water enriched with blood but also from runoff from the Gihon spring as well as plenty of natural fertilizer. Since the Kidron is lower than Jerusalem, garbage piled up there. Today the garbage is a treasure trove for archaeologists but in ancient times it was fabulous fertilizer.

The Kidron served until very recently as the eastern border of Jerusalem. King David crossed it in his flight from Absalom and King Solomon used it as a handy marker to warn someone not to leave the city:

“On the very day that you go out and cross the Kidron Valley, you can be sure that you will die; your blood shall be on your own head.” (Kings II 2:37)

The fact that the Kidron is at the edge of the city is the main reason why people also began to use it as a burial ground already in First Temple times. Today, besides the monumental and impressive Second Temple graves (Yad Avshalom, Kever Bnei Hezir and others) you can see much more modest burial caves cut into the bedrock of the valley walls. These are from the First Temple period and one cave even had a (mostly) intact inscription warning potential thieves that there is no gold or silver in the cave, only bones. 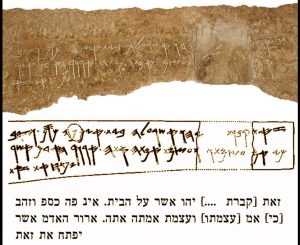 The edge of the city was used for another activity in First Temple times: destroying idolatry. In the religious reforms of both King Hezekiah and King Josiah, objectionable idolatrous objects were taken out of the Temple and its environs and brought to the Kidron Valley to be destroyed. Only then was the Temple purified again. So from idolatry to blood and muck, the Kidron served as the Temple’s garbage dump.

Is there anything left from the sewers that brought the blood out to the valley? In archaeological excavations done in the last decade or so in the City of David, the main street of Second Temple times is slowly being uncovered. It ran from the Shiloach pool in the south and up to the street of stores along today’s Western Wall. In conjunction with excavating the monumental stepped street, the sewer below is also being excavated. Part of it can be walked through today. It is large and impressive, befitting a Roman era drainage system. But one discovery that the archaeologists made was puzzling. At one point along the street the pavement is violently smashed. This is not natural wear and tear but evidence of someone who wanted to get below the street to the sewers and used weapons to hack through the stone.  In the sewers meanwhile the excavators found whole cooking pots, not a normal artifact to find underground. To understand the riddle of the broken street and the pots in the sewers, we have to look at the story of the Great Revolt. According to Josephus (The Jewish War Book 6), as the situation in the city became more dire, some of the Jewish rebels hid underground, hoping to find a way through the sewers out to the desert and to safety. They brought their families as well as supplies to survive. But the Roman soldiers discovered the hiding place and entered it, killing the rebels before they could escape through the Kidron to the Judean Desert. 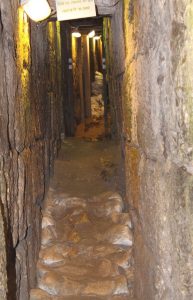 The Kidron Valley: border, burial place, garbage dump, garden paradise – so many designations for one valley. But there is one more. At the end of the book of Ezekiel one of the eschatological visions that the prophet has is of a stream of water flowing from under the Temple Mount. It goes east along the riverbed, eventually reaching the Dead Sea and bringing it back to life:

“This water,” he told me, “runs out to the eastern region, and flows into the Arabah; and when it comes into the sea, into the sea of foul waters, the water will become wholesome.   Every living creature that swarms will be able to live wherever this stream goes; the fish will be very abundant once these waters have reached there. It will be wholesome, and everything will live wherever this stream goes.” (Ezekiel 47:8-9)

Although the Kidron is not mentioned by name, it is the logical choice for the valley here. It moves beyond its role as the place that cleanses the Temple and turns to revitalizing the Land of Israel and bringing life to what has been dead for millennia.

“All kinds of trees for food will grow up on both banks of the stream. Their leaves will not wither nor their fruit fail; they will yield new fruit every month, because the water for them flows from the Temple. Their fruit will serve for food and their leaves for healing.” (Ezekiel 47:12) 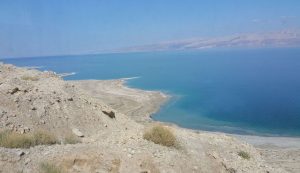 The Dead Sea before the end of days (Wikipedia)