In today’s daf we have a strange and interesting conversation about Elijah the Prophet. Ostensibly about whether one can travel outside the Shabbat limits by flying through the air, the discussion comes around to the idea of Elijah as the מבשר, the forerunner of the Messiah. He must appear before the Messiah does, to announce his coming. And he won’t do that on Friday or the eve of a holiday because we are just too busy and would not have time for him.

Leaving aside the question of wouldn’t I be willing to stop making my chicken soup in order to hear about the MESSIAH COMING!!, the discussion raises the question of when and how does Elijah take on this role. Elijah is a starring character in the book of Kings, as the wicked King Ahab’s adversary and as the champion of God against the Baal worshippers of the time. He is as uncompromising in his devotion to God as he is unwilling to see anything positive about the Jewish people. He is a a man of fire who ultimately is carried away in a chariot of fire, ostensibly alive, to heaven, replaced by the milder prophet Elisha.

But then what? If Elijah did not die, where did he go? And will he return? We have the answer in two other passages of Tanakh. In Divrei HaYamim II 21 King Yehoram of Judah receives a letter from the deceased Elijah, telling him to behave himself. The message is not an unusual one for a prophet, it is the method of delivery that is unprecedented. Prophets rarely come from beyond to carry on their work, telling us that perhaps Elijah is alive, albeit not on earth. The more famous later mention of Elijah is at the end of the book of Malachi, the last prophet of the minor Trei Asar prophets, and perhaps the last prophet of Israel altogether:

Lo, I will send the prophet Elijah to you before the coming of the awesome, fearful day of the LORD. He shall reconcile parents with children and children with their parents, so that, when I come, I do not strike the whole land with utter destruction. (Malachi 3:23-24)

Here we see Elijah in a completely new role. As prophecy is ending in the world, Malachi tells us that it will return, with Elijah, but only before the Messiah does. He seems to have two roles in these verses: to be the precursor to the Messiah and to bring peace and/or reconciliation. The idea of Elijah as the warm up act to the Messiah was adopted by early Christians. As they tended to do, they saw the Biblical characters as foreshadowings for their stories. Elijah’s place as harbinger is now taken by John the Baptist:

Truly I tell you, among those born of women there has not risen anyone greater than John the Baptist; yet whoever is least in the kingdom of heaven is greater than he. . 14 And if you are willing to accept it, he is the Elijah who was to come.  (Matthew 11:11, 14)

Jews and Christians seem to have readily adopted the idea that the Messiah cannot come without someone to announce him, hence the discussion on our daf. For Jews however, there was the question of what does Elijah do with his time? And what else will he do once he arrives?

The rabbis made sure Elijah was very busy. He is mentioned all over Rabbinic literature and in later texts as well. Most famously, he is the anonymous do-gooder who helps a person or a community and then disappears. But he has other roles as well. Rav Elchanan Samet, in his book about Elijah, summarizes the many texts brought by Eliezer Margoliot in his work on Elijah. He says Elijah stories take three basic forms:

He is the defender of Israel, writing down their good deeds before God. This happens particularly on Motzai Shabbat and that is why there are songs about Elijah at the havdalah service.

He is the helper of the Jewish people, as mentioned above, whether it is to comfort someone, bring food, or pass on a message.

He is the interlocutor between the Sages and the God, teaching them Torah, telling them what is going on “behind the scenes” in heaven, and rebuking them if they don’t treat the Jewish people well enough. Ultimately, he will answer unanswered questions.

Which brings us to what will happen when Elijah does return. This question is answered by the mishnah at the end of Masechet Eduyot. There the rabbis have a four way argument: Rabbi Yehoshua, relating a teaching of his teacher Rabban Yohanan ben Zakkai, says that Elijah will settle questions of ancestry: people of questionable family background who are respectable because of their power or wealth will be “outed” and people who were unfairly accused of having an illegitimate background will be reinstated. Rabbi Yehuda says only the latter, bringing people close, will happen. Rabbi Shimon says that Elijah will come to solve halakhic disputes. And the rabbis say he will come to make peace. According to the commentary of Rabbi Ovadiah Bartenura, all of them are interpreting the verse in Malachi about fathers and children reconciling, each taking its meaning in a slightly different way: to refer to lineage, teachers reconciling with students or the whole world being at peace.

In all these situations, Elijah is seen as the champion of Israel. His role is to help Jews, record their merits and make peace among them. This stands in marked contrast to his role in the Bible, where he only champions God. Rav Samet explains that this is the reason he does not die, he has to fulfill his destiny as not just the defender of God to the people but the defender of the people to God. And ultimately he will be the harbinger of better days with the coming of the Messiah. 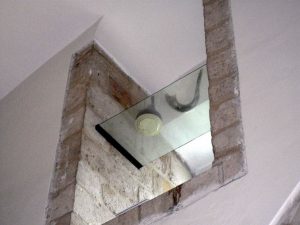 Shofar and oil jug on a shelf in the Rabban Yochanan ben Zakkai synagogue in Jerusalem, prepared for Elijah (Wikipedia)