For Want of a Nail

In the midst of a series of mishnayot that deal with what can be taken out of the house on Yom Tov, the Mishnah on daf 14 brings in a strange example of something that is forbidden to carry:

What is a spiked sandal, a סנדל מסומר, and why can we not carry it/wear it on Yom Tov? The Gemara goes on and explains that this is because of “an incident that occurred,” מעשה שהיה. To know what that incident was we must turn back to Masechet Shabbat 60 where we first hear about this sandal and about how one is not allowed to wear it outside on Shabbat. At first it seems to be part of the general dynamic of the chapter which deals with what is permissible to carry on Shabbat. The principle seems to be that if there is a possibility that someone will take off the item, one should not wear it outside. Sandal straps may break and then one would be tempted to carry the sandal. But why a spiked sandal specifically? And why would the Tosefta forbid wearing this sandal even inside the house? (Tosefta Shabbat 5:8) 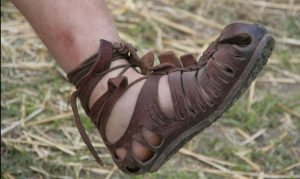 The Gemara then moves away from purely halachic principles and heads towards history. Shmuel explains that during the time of the decrees שמד, the Jews hid in caves and did not allow the residents free passage so that the Romans would not discover their hideout. But then tragedy struck:

“the sandal of one of them was reversed, the front of the sandal was in the back, and his footprints appeared like the steps of one leaving the cave. They thought that one of them left and feared that their enemies saw him and were now coming upon them to attack. In their panic, they pushed one another and killed one another in greater numbers than their enemies had killed among them.” (Shabbat 60a)

To understand this story one needs to turn to archaeology. The time of the decrees is assumed to be, broadly, the time of the Bar Kokhba Revolt (132 -135 CE). Unlike the Great Revolt (66-70 CE), the Bar Kokhba Revolt has no chronicler, no Josephus to tell us the story in an orderly fashion. We know a little from Roman writers and a little from later Christian authors, as well as hints from Rabbinic literature. The outline of those years – Roman persecution, Jewish revolt and terrible defeat – was known but the details and the chronology were murky. But the archaeology of the past seventy years has illuminated the past in dramatic ways. We have uncovered over three hundred underground cave complexes scattered throughout Judea, as well as some in the Galilee and Samaria. These caves are what the Gemara is referring to and they tell us the extent of the revolt. The finds inside range from ordinary household items, including keys, taken by the rebels in their flight, to letters signed by none other than “Shimon Nasi Yisrael,” Shimon the leader of Israel, i.e., Bar Kokhba himself.

The architecture of the caves follows a similar pattern. They are often built out of existing underground structures but then dug deeper and more narrow. They usually have only one entrance/exit and it is a narrow passageway with room for only one person at a time. The entrances were hidden underground and there was a limited amount of air and space. One can easily imagine a panicked rush to get out, resulting in a deathly stampede. 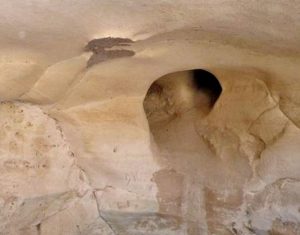 Entrance to a hideout cave (Wikipedia)

But this still does not explain the story of the sandal. Was it purely bad memories that led the Sages to decree against the sandal? Or was it a safety issue, a fear that the same thing might happen again? In either case, why would they prohibit the wearing only on Shabbat and Yom Tov? The answers given in Masechet Shabbat, that we are commemorating the day the event happened, or that these are the times people assemble, seem weak. We need to look deeper at the sandal itself.

The spiked sandal was also called a calgas, קלגס. Both terms refer to a type of shoe worn by Roman soldiers called a caliga. This was a boot with vents and a thick sole studded with hobnails: Our sources emphasize the nails: the impressions they made in the ground as well as their clattering sound which instilled fear in people and even led to women miscarrying (Yerushalmi Shabbat 86).  Sandals like these, as well as the nails alone, were found at Masada and at other sites around Israel. At Masada, a pay slip for a Roman soldier was found, with the price of his caligae deducted from his salary! The sandal was worn by others (and some were even found in the Bar Kokhba caves) but it had a clear association with the despised Roman soldiers. 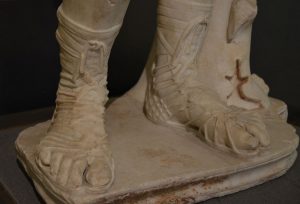 Statue of a Roman soldier (Wikipedia)

Perhaps the rabbis saw the caliga as something that was inappropriate for a Jew to wear, somewhat similar to wearing a swastika today. They wanted to ban it but realized that a purely nationalistic reason would not carry enough weight in the law. So they added a halachic “envelope” to make the law more palatable. They explained that wearing the sandal on Shabbat could cause one to violate prohibitions of carrying. And since (as the Yerushalmi explains) few people in those frugal days had more than one pair of shoes, by forbidding the wearing on Shabbat, one in essence forbade wearing them altogether.

Professor Hanan Eshel, one of the greatest Bar Kokhba scholars, adds another intriguing element to the mix. It seems that the nails on the sandal often were not in a random pattern but spelled out letters and even words. When you walked in the sand or the mud the letters were impressed into the ground. One such pair, found in Egypt have the nails arranged to spell out “after me!” In this case, wearing the sandals on Shabbat could lead to violating the prohibition against writing. Here we have an actual Shabbat prohibition combined with the nationalistic reason of not wanting to emulate Roman soldiers. 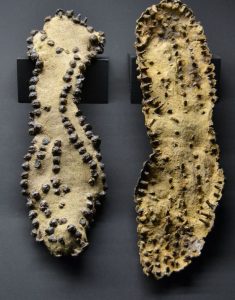 Finding out the hidden stories of the Bar Kokhba Revolt is significant as well as fascinating. But there is a reason that these stories are only hinted at in Rabbinic literature. Despite the fact that the Bar Kokhba Revolt was arguably the most devastating event in ancient Jewish history, we barely hear about it in our sources. It is as if, living in a post Holocaust world, we had barely any stories of survivors and no philosophical works dealing with the question of God during the Shoah. But the rabbis had more important work to do. They had no time to dwell in the past. They needed to rebuild the world of Torah that had been lost in those years of shmad. Looking back in sorrow or in anger would not help preserve the traditions. And so we only hear hints here and there of the stories that were the background to their reality. And they use those stories to build our moral and halachic world.