The Gemara in Ketubot 45b brings a reference to the gates of the city as a place for punishment. What was the  function of the city gate and what has archaeology added to our understanding of this urban mainstay?

In Biblical times (and even later) cities tended to have one gate. The gate was the weak point in the city’s defense system so having more than one meant more work for the city’s security detail. In fact, it was so unusual that a city would have more than one gate that we find a town named in the book of Joshua as Shaarayim, literally two gates. When archaeologists uncovered a town in the lowlands near Bet Shemesh with two gates, from Biblical times, the assumption was that this is the Biblical Shaarayim. 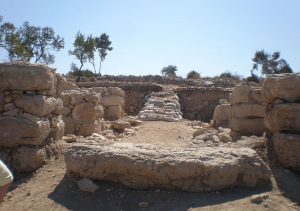 One of the gates at Shaarayim, also known as Kayafa (Wikipedia)

Having only one gate did not mean that the gate was a small or insignificant opening. Gates from Canaanite and Israelite times typically included four or six chambers in the gate structure. Six-chambered gates have been found in the Solomonic cities of Gezer, Hazor and Megiddo as well as in Israelite Lachish. Four-chambered gates have been found in Tel Sheva, Jerusalem and Shaarayim among others. Sometime there was also an outer and an inner gate with space between the two. Why did cities need so much space for what we think of as a place that you just pass through? 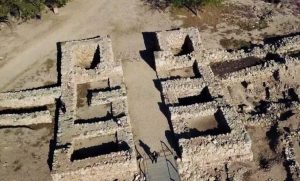 The answer lies in the importance of the gate in Biblical times. The gate area functioned as a combination of marketplace, temple and courthouse. Numerous stories in the Bible take place at the gate. When Abraham wants to purchase a plot of land for his wife Sarah’s grave, he clinches the deal at the gates of Hebron, with the witnesses being all the passerby at the gate (Bereshit 23:18). Boaz speaks to Ruth’s kinsman at the gates of Bethlehem, and when this “Ploni Almoni” relinquishes his rights to her and her husband’s land, Boaz takes on this responsibility with the elders at the gate serving as impromptu judges (Ruth 4:11). When the author of Proverbs wants to show that the woman of valor (eshet hayil) has a husband who is also no slouch, it tells us that he is “prominent at the gate as he sits with the elders of the land.” (Proverbs 31:23). The religious reforms of Josiah get rid of what are known as bamot shaar, altars at the gates. (Kings II 23:8)

Have we found archaeological evidence of all these functions of the gate? We see the gate as a place of religion already in Canaanite times. At the impressive gate in Ashkelon archaeologists found a small clay shrine with a perfect small silver calf inside, perhaps similar to the golden calf worship of the Israelites in the desert. In the Israelite city of Dan we have an altar right outside the outer gate. 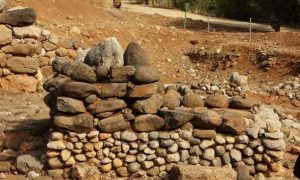 The most interesting artifact discovered at a gate indirectly shows that it was a religious place. In the gate complex of Lachish, a small temple, complete with an outer room and an inner “holy of holies” was found. But in this innermost chamber was. . . a toilet. What better way to desecrate an idolatrous shrine than by puting a toilet there? And in fact we know that this was done by the Israelite king Jehu to desecrate the shrines of the Baal in Samaria:

“They destroyed the pillar of Baal, and they tore down the temple of Baal and turned it into latrines, as is still the case.” (Kings II 10:27)

A market at the gate was also proven in Lachish, where a different chamber had seal impressions of an official, presumably a tax collector, as well as benches and scoops for measuring out goods. In many of the gates, the relatively roomy chambers provided space for judges to sit.

Why was all this action at the gate and not inside the city? Perhaps the townsfolk were not excited about allowing strangers into their midst. Or perhaps the gate was just an easy gathering place, a site where locals and outsiders could mix, worship and adjudicate. With all these people gathering at the gate, it is a logical place for the kind of public punishment our Gemara is talking about, a place where everyone sees the consequences of bad actions.

This situation changed in Greek and Roman times. Cities were still fortified with walls but the gate, at least in the Land of Israel ceased being the main focus of a town’s activity. Life moved inside the walls. The Greek center of town was called the agora, the Romans called it the forum. In both cases, business, religion and politics moved inside the city. Professor Yisrael Levine in his monumental work on the ancient synagogue, suggests that there was a transitional period, when the gate still was a focal point of worship, in this case at the earliest synagogues.  Both Gamla and Migdal, synagogues from Second Temple times, are located on the edge of the city, Gamla is actually in the wall. Perhaps this was a transition from worship at the gate. 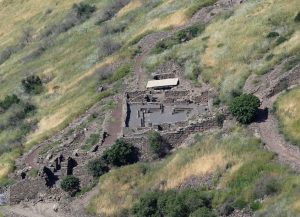 Gamla synagogue in the walls (Wikipedia)

Although judgment and commerce moved inside the city in Roman times, gates still had symbolic importance. The Romans made triumphal arches/gates to show that they had conquered a city. These gates were not necessarily attached to a wall and they were not meant for defense but to show that the Romans ruled over the city. A classic example is the triple arch that the Romans made at the site of what is today Damascus Gate in Jerusalem. One piece of the arch has been uncovered, along with an inscription telling us the Roman name for Jerusalem: Colonia Aelia Capitolina. 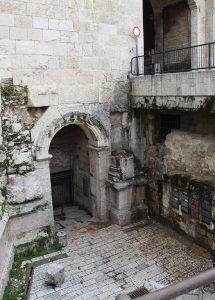 Later in Jerusalem’s history gates became important again as a way to keep out enemies and secure the city. In the 19th century the gates were locked at sunset and travelers who arrived late had to take their chances and sleep outside the city. With the growth of new Jerusalem, inside and outside the Old City became irrelevant and the gates stayed open all the time. And with the reunification of the city in 1967, we hope to never see the gates closed again!