When does a Person’s Unique Da’at Have Significance? – Sukkah – Gefet 2

Delve into commentaries on the daf in this advanced level shiur with Rabbanit Yael Shimoni.

Disclaimer: you do not have to be a daf learner to study Gefet. The texts are in Hebrew, the class teaching is in English.

The second half of the mishnayot of the first perek of Masechet Sukka deals with the question of the materials and characteristics of the schach of the sukkah, which from a halachic perspective is the main part of the sukkah anג the mitzvah. In the mishna which we learned on Daf 15, the halacha determines:

From the mishna it sounds that the boards, which once were used as legs of the bed, can’t be use as schach, and in order to validate a sukkah which has these on top of it, you need to create a space between each leg and fill it with kosher schach. This law of the mishna seems strange, as we learned that the conditions for validity of the schach are that it must grow from the ground and not be susceptible to impurity. The bed legs are made of wood, and so they meet the first condition of having grown from the ground, and once they are detached from the bed, they are no longer used for a specific purpose and so, since they are no longer considered a כלי, they are not susceptible to impurity.

The gemara tries to understand the reason for disqualifying this kind of schach and suggests at first, that the law in the mishna supports a special law which was held by Rabbi Ami:

Rabbi Ami says that even “בלאי כלים” – something worn out which was once used as a כלי and so was susceptible to impurity, is disqualified from being used as schach even though at the time of usage for schach, it is so worn out that it is no longer considered a כלי. In this way, the gemara suggests, at first, that this is the reason for disqualifying the bed legs from being used as kosher schach. In the continuation, however, the gemara rejects this suggestion, and understands that the reason for disqualification is that these legs can still be used as some sort of כלי, and so they are still susceptible to impurity. This is what disqualifies them from being used as kosher schach.

Rashi, in “ד”ה “בבלאי כלים explains which כלי Rabbi Ami was talking about, and gives a hint as to the meaning behind Rabbi Ami’s words:

Rashi clarifies the term “בלאי כלים”, and writes that this is referring to “מטלניות שאין בהן שלוש על שלוש” (which will be mentioned on the next daf) – shreds of clothing that are smaller than three fingers by three fingers wide, and so are no longer considered a כלי at all. However, since they came from a כלי, the rabbis made a decree against using them. From Rashi’s words it seems that the law said by Rabbi Ami is not דאורייתא, rather a rabbinic decree, as he says “גזור בה רבנן”. What was the reason for this decree? Rashi doesn’t explain, but the Rambam in הלכות סוכה, פ”ה ה”ב clarifies in greater detail.

Shreds of clothing or disconnected parts of a bed were susceptible to impurity when they were still כלים, and if they became impure while they were כלים, and then were broken or became shredded, they remain impure. The rabbis were afraid that a person would come to use them as schach before he purified them, and so decreed against using any such items as schach, even when they were not impure to begin with. According to the Rambam, this decree of the rabbis is the reason for the law of Rabbi Ami.

In the continuation, the gemara brings an example of the principle brought by Rabbi Ami with regards to the clothing shreds:

Abayei explains “בלאי כלים” as pieces of fabric which were once used as a piece of clothing, but now all that is left of it is less than three by three fingers of cloth. The reason that this size of fabric is no longer considered to be a כלי is that it is “not worthy of being worn by poor people nor rich people”, meaning that no person would consider this to be a piece of clothing.

Many times when we study the words of the Rishonim, there is a need to fill in gaps and analyze the question which lies at the base of their words, even when they don’t spell it out explicitly. This Tosfot is a good example of this. The implicit question at the beginning of the Tosfot is why is it so clear to Abayei that shreds of clothing that are this size are automatically not considered clothing for anyone? Could there not be a specific situation where a person would consider even this to be clothing (just look at the fashion world today!)? In order to answer this question, Tosfot bring in an important principle: “ואפילו חישב עליהן בטלה דעתו”. This means that on the halachic, legal plane, the question of specific situations is not what determines the definition of laws, rather it is the behaviors and thoughts of the majority of reasonable people which determines this. Therefore, even if  there could be a specific person who would consider this tiny piece of fabric to be clothing, his opinion is cancelled out by the majority, and the fabric is still going to be considered merely a shred.

This assertion of the Tosfot becomes problematic when we look at Masechet Zevachim 94a. The sugiya there deals with an argument between Rabbi Yehuda and Rabbi Elazer regarding the question of whether the hide of an animal which was removed and got dirty from the blood of the קרבן חטאת still requires purification even though it still is has not been processed to the point where it would be considered a piece of clothing. Rabbi Yehuda holds that the stage of the removal of the hide already renders it susceptible to impurity, and therefore it would require purification, while Rabbi Elazar holds that only after the final processing of the hide does it become a real piece of clothing which would require purification. Abayei there searches for another practical difference between the two approaches of the Tannaim:

The example which Abayei brings is exactly our little shred of fabric which is less than three by three fingers, and which in our sugiya is characterized as completely useless. In the sugiya in Zevachim, Abayei says the same thing. This fabric shred is an item which is not considered to be a כלי according to halacha, and therefore is not susceptible to impurity. However, here he writes that it is still considered worthy of being a כלי, meaning that someone might still decide to use it as a piece of clothing, and so according to the opinion of Rabbi Yehuda, similar to the unprocessed animal hide which has only been removed from the animal, this piece of fabric will need to be purified if it got dirty from the blood of the קרבן חטאת. To summarize the contradiction between the sugiyot:

In our sugiya, Abayei assumes that this tiny piece of fabric is considered “בלאי כלים” – a shred which is not usable as clothing even for a poor person, and according to Tosfot, even if a person would still decide to use it as clothing, his opinion is cancelled out by the majority of reasonable people, and this does not change the status of the piece of fabric. In Zevahim, however, Abayei assumes that although the tiny piece of fabric is not a כלי which is susceptible to impurity, it is something that is worthy of being a כלי, and if there were to be a specific case where a person would use it as clothing, his opinion would not be cancelled out by the rest of the world.

Tosfot solve this contradiction by saying: “דלא דמי דהתם מחשבתו ניכרת מתוך מעשיו“, meaning that these two cases are not comparable. While in our sugiya in Sukkah, the physical action that the person does with the shred of fabric is one of covering the Sukkah, which does not relate to it as a כלי, in the sugiya in Zevachim the action is one which expresses the unique way in which the person relates to the shred of fabric. He keeps it and maybe even uses it already in order to fix his robe, as Rashi there explains.

Tosfot’s solution to the contradiction between the sugiyot turns the principle of “בטלה דעתו של אדם” into something more flexible and interesting. A person’s thoughts and intentions are indeed cancelled out by the majority, however, if he does an action in real life, which expresses his unique intentions, they become significant and can define for him, unique, personal halachot which match the way in which he conducts his life. It is beyond the scope of this shiur to examine this principle in other sugiyot and to check if there too Tosfot’s claim works in the same way, however this is a halachic and philosophical direction which is worthy of examination.

We will end with the words of Rabbi Akiva Eiger, who in his comments in גליון הש”ס sends us to another sugiya in Masechet Niddah 60b which gives textual support to Tosfot’s suggestion. There, the sugiya looks for examples for the opinion of Rabbi Nechemia who thinks that when a woman sees blood on an object which is not susceptible to impurity, the decree of the rabbis about stains does not apply.

The two examples brought for Rabbi Nechemia’s opinion are the back of an earthenware vessel and the fabric shred which is smaller than three by three fingers. Rabbi Akiva Eiger explains that while the gemara uses the term “פשיטא” with regards to the back of the earthenware vessel, meaning that it is clear and obvious that something like this is not considered a place that is susceptible to impurity, with regards to the fabric shred, it does not use this term, rather explains that it is not worthy of being worn by any person. Rabbi Akiva Eiger suggests that the fact that the sugiya doesn’t see this law as obvious is connected to the fact that this is not an absolute rule, and that in the event that a person does not only think about using it but actually does an action which expresses his use of it, then it will turn into something of significance, even if it has not yet officially reached the level of an actual כלי which is susceptible to impurity. 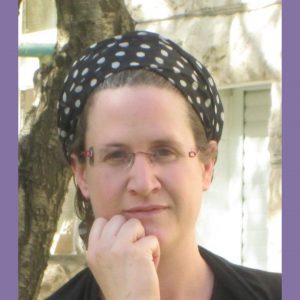