Going With the Flow

In the context of the Kohen Gadol’s preparations for the avoda, we hear about his requirement to use the mikveh numerous times during Yom Kippur.  Abaye mentions that the water for the mikveh above the Water Gate comes from Ein Eitam עין עיתם . According to Abaye’s calculations, this spring must be twenty-three amot higher than the floor of the azara because the gates in the azara are twenty amot high, plus another three amot for the depth of the mikveh. The Water Gate/Shaar HaMayim is one of the seven gates around the azara. It is located on the southeast corner, near Bet Avtinos. According to the Kehati commentary, this is where they brought in the water for the water ceremony on Sukkot, the ניסוך המים. Besides this connection, and the mikveh, there may also be another water connection. In one of the prophet Ezekiel’s visions of the Temple at the end of days, he sees water flowing out of the Temple and towards the Dead Sea. It flows out south of the altar (Ezekiel 47:2), the spot where the Water Gate is. The symbolism of the living waters of the Temple healing the waters of the Dead Sea is a powerful eschatological vision. 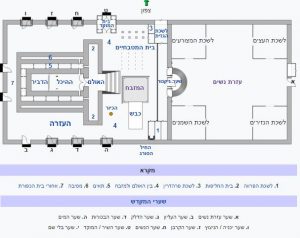 Diagram of the Temple,  letter ה is the water gate (Wikipedia)

Amidst all this water, let us not lose Ein Eitam – where is it? It is mentioned as the source for the mikveh here and in the Yerushalmi (Yoma 3:8) as the source for the waters in the basin כיור. In both cases, the water was brought by an aqueduct.  Tanakh does not have a reference to a spring called Eitam but we do hear in Divrei HaYamim 2(11:6) of an Eitam that is one of Rehobam’s fortress cities. There it is sandwiched between Bethlehem and Tekoa, leading us to a location southeast of Jerusalem. Josephus also writes about Eitam, at a distance of seven Roman miles from Jerusalem, with fruit trees and water. According to the laws of physics, Ein Eitam must be higher than the Temple Mount, as Abaye tells us, because, as Rashi succinctly points out, water does not flow uphill.

However, Rashi himself creates a problem. He identifies Ein Eitam with Mei Naftoah מי נפתוח  mentioned in Yehoshua 15 as the border between Judah and Benjamin. Mei Naftoah is traditionally identified with Lifta, an Arab village west of Jerusalem. In another passage in Zevachim 54 that also mentions Ein Eitam, calling it the highest place, Rashi also says that this is Mei Naftoah. 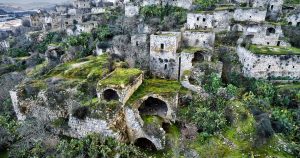 This is a problematic identification because Lifta (703 meters above sea level) is 30 meters lower than the Temple Mount (735 meters above sea level). Even if Ein Eitam is not the highest place in Israel, (clearly not!) it cannot be lower than the Temple Mount. So sadly we have to reject Rashi’s identification. As much as Rashi is astounding in his knowledge of geography, topography, flora and fauna, there are things he misses because he lived so far away from Eretz Yisrael. 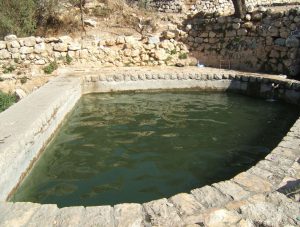 The most likely candidate for Ein Eitam is the spring right outside the village of Artas, south of Bethlehem and adjacent to Solomon’s Pools.  The Maharam Habib (Rabbi Moshe ibn Habib 1654-1696, Jerusalem)  identifies Ein Eitam with a spring on the road from Hebron to Jerusalem and explains that its water was brought by pipe to Jerusalem. This information fits nicely with what we know today: the lower aqueduct האמה התחתונה   that brought water to Jerusalem from the area of Solomon’s Pools near Bethlehem uses as one of its sources the spring Ein al Etan עין אל עטן , a very close match to  עין עיטם.

Ein Eitam is part of a complex aqueduct system begun in Hasmonean times. Second Temple Jerusalem in its latter period was larger than First Temple Jerusalem and therefore needed much more water. The meager resources of the Gihon spring would not be enough for the needs of the residents and tourists. The Temple also required vast amounts of water, whether for the mikvaot we are discussing here or just to clean up the mess of hundreds of sacrifices. Water needed to be brought from outside and the place that had springs and, no less important, the height to carry the water to Jerusalem, was today’s Gush Etzion south of the city. 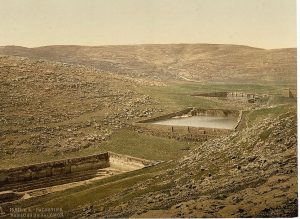 The first aqueduct, called the lower aqueduct, began at Ein Eitam and followed a winding twenty kilometer route to the city. The reason for the winding route was because the water always needed to be going downhill, even if only slightly. In Herodian and Roman times a need for more water necessitated building a second aqueduct, the upper aqueduct. This time the water came from even further south. All the water was concentrated in three massive pools just south of Bethlehem, right near Ein Eitam. Misnamed Solomon’s Pools (they date to at least five hundred years after Solomon) they are still around today and are incredibly impressive. From the pools, the water set out on its various routes to Jerusalem. Parts of the aqueducts and the pools in Jerusalem still exist today. One piece is on the Promenade in Talpiot and you can walk through the narrow tunnel. There is also a great mosaic map showing the route of the water.

Jerusalem may be the center of the universe but it is not the highest place in the area. It also is not self sufficient. As we have seen in other places in our masechet, Jerusalem has deep connections to other cities: water from springs in the south, light in Hebron and more. Jerusalem: a city that brings together all of the Land of Israel. 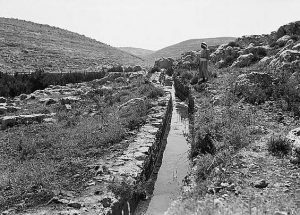 Part of the upper aqueduct in southern Gush Etzion, near El Arub (Wikipedia)