Great Shall Be the Glory of the Later House

In order to prove a point about impurity, the Gemara on pages 16 and 17 brings in some verses from Haggai the prophet, questioning the priests about what makes something pure or impure. Who was Haggai and when does this story take place? 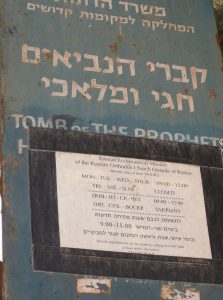 The last three of the “minor Prophets,” known in Hebrew as Trei Asar, the twelve, are Haggai, Zechariah and Malachi. Unlike their predecessors Isaiah, Jeremiah and Ezekiel, they do not live in the time of the First Temple. These last three are active in the early days of the Second Temple, in the period known as Shivat Zion, the return to Zion. They are considered the last of the prophets and after them prophecy officially ceases (although fools and children can still be prophets!). In order to understand Haggai’s messages, we need to explore this time period.

The First Temple was destroyed by the Babylonians in 586 BCE. Already eleven years prior, the Babylonians had exiled the elites of Judah along with their king Yehoyachin. This exile, known as the exile of the craftsmen  החרש והמסגר established a community in Babylonia, led by the prophet Ezekiel. In 586 the remainder of the Judeans is exiled and joins them. A small community left behind by the Babylonians and led by Gedalia ben Ahikam, is short lived because Gedalia is assassinated by a fellow Jew and the last remnants go down to Egypt along with the prophet Jeremiah. In reality, although we often think of the land of Israel as empty of Jews at that point, many do stay behind. These include some Judeans as well as the Samaritans. When the Jews return they have to contend with those residents who never left, a conflict that we see played out in the books of Ezra and Nehemia. 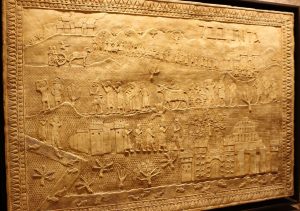 Fifty years after the exile, the Babylonian empire has fallen to the Persians. The Persian emperor Cyrus, as part of his general policy, issued a decree allowing the Judeans to return to Judah and rebuild their temple. Only a small percentage take up the offer but they are accompanied by some of the royal family of Judah. They begin to rebuild but when they rebuff the locals who want to take part, said locals send a letter to the Persian kings accusing the Judeans of treason. Work is stopped on the Temple and only resumed when King Darius in on the throne, in the year 520 BCE. This is where Haggai comes into the picture. 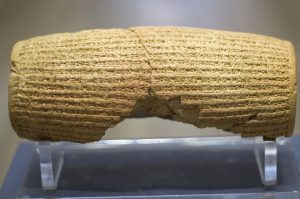 The book of Haggai is unusual in its precise dating. The prophet tells us exactly, to the day, when he is giving a prophecy. The whole book takes place in the second year of King Darius (520), from the sixth month (Elul) to the ninth month (Kislev). And what is Haggai’s message? He says that although permission has been granted by the Persians to resume work on the Temple, the people are slow to get started. Life was hard in sixth century Judea. The small group of returnees had security issues, the city of Jerusalem was mostly destroyed and it was hard to make a living. Who had the time or the resources to build a temple?

That is precisely Haggai’s message. The people say it isn’t the right time to rebuild the temple? Haggai says NOW is the time, and if you follow what God wants, He will help you with all your other needs:

“Is it a time for you to dwell in your paneled houses, while this House is lying in ruins? Now thus said the LORD of Hosts: Consider how you have been faring!

You have sowed much and brought in little; you eat without being satisfied; you drink without getting your fill; you clothe yourselves, but no one gets warm; and he who earns anything earns it for a leaky purse.

Thus said the LORD of Hosts: Consider how you have fared: Go up to the hills and get timber, and rebuild the House; then I will look on it with favor and I will be glorified—said the LORD.” (Haggai 1:4-8)

After they are pushed to resume the building, Haggai speaks to them again on the twenty fourth of Kislev, the day they finish the foundations of the House (and celebrate the next day, the twenty fifth, just like the Maccabees do centuries later and like we will on Friday!). The text, quoted on our daf, is unclear and may be literal or allegorical. It may be referring to not allowing non Jews to serve in the Temple or it may be referring to not sacrificing until the Temple is completed. In any case, the people are pushed by Haggai’s words to finish the task. Haggai recognizes how small and unadorned this structure is compared to King Solomon’s temple but he comforts them:

Do we have any remnant of Haggai in archaeology? If you go to the Mount of Olives, as you begin to descend from the peak to the cemetery, you will see a sign pointing to “The Tombs of the Prophets.” Inside the courtyard of an Arab house, whose owner is the caretaker, is a large burial cave. When you enter it you see many niches in the walls. According to tradition, this is the burial place of Haggai and Malachi (and maybe Zechariah). Is it? Nope. The oldest caves are Jewish graves from late Second Temple times, but most of the burial niches were for Christian pilgrims from Byzantine times The inscriptions clearly indicate that these graves belonged to Christians, probably travelers who came to Jerusalem and died and could not be returned home for burial. It is still a very evocative place to sit and read Haggai’s words. 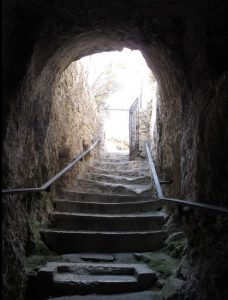 Tombs of the Prophets (Yaakov, Wikipedia)