Rain, rain go away, come again another day. That ditty from childhood is much less resonant in Israel where we are always worried about if we will have a rainy enough winter. Rain, and its presence and absence, are very prevalent in the first part of our new masechet, Taanit. And as is sometimes the case, the cycle of the daf happens to fit perfectly with the cycle of the year – here in Israel we are eagerly awaiting some significant rain since we have only had a little tease since Sukkot. Let’s dive into the story of rain in Judaism.

The importance of rain is emphasized by our masechet beginning with the prayers for rain. As the tractate goes on, we will see what happens if those prayers aren’t answered – fasts, more prayer and public mourning. In case you are in any doubt as to how important rain was in ancient Israel, the Gemara comes along and gives us some amazing paeans to rain: 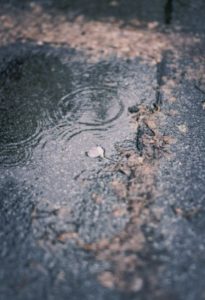 Wow, that’s pretty impressive for a day when you just want to stay inside. Are we only talking about rain as necessary for agriculture or is something greater at work?

Already on the very first page of the masechet we heard that God holds three “keys:” birth, rain and resurrection of the dead. These are the three sources of life in this world: coming into the world, returning after death and being able to make a living while alive. So rain is equivalent to parnasa, a livelihood. But wait, there’s more. If we go back to Torah sources, rain is also about reward and punishment, it is God’s way of meting out justice to the world:

“If, then, you obey the commandments that I enjoin upon you this day, loving the LORD your God and serving Him with all your heart and soul, I will grant the rain for your land in season, the early rain and the late.”  (Devarim 11:13-14)

These words make up part of the second paragraph of the Shema and are said twice daily in prayer. Reward and punishment is a basic idea in Judaism and according to the Torah it is expressed through rainfall (although many later authorities will grapple with the question of whether we receive our rewards in this world or the next). The context of this paragraph is very important. A few verses earlier the Torah talks about the difference between the land of Israel and the land of Egypt. Egypt is nourished by the Nile, an ever powerful water source. It never can dry up and so one never has to be anxious about a water supply. However, one does have to live in proximity to the Nile. 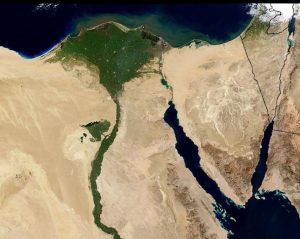 The Nile delta as seen from space (Wikipedia)

In contrast, the Land of Israel is:

This land’s water supply is ever changing. It is delivered directly to your fields – no schlepping from the banks of the Nile – BUT it depends on your behavior. God is watching and will give you this reward if you deserve it.

The heavy but exalting burden of living directly under Divine supervision is expressed by many of the prophets. One who puts his own unique twist on it is the prophet Amos. Amos, who lived in the eighth century BCE, in a time of relative peace and prosperity in Israel, spent his days on the edge of the desert. He was a man who worked with sheep and goats and their grazing land is the desert. He saw with his own eyes how the weather in the desert was dramatically different than it was in the hills a few miles away. And like all good prophets, he took this life experience and used it to transmit God’s message about reward and punishment:

“I therefore withheld the rain from you three months before harvest time:
I would make it rain on one town and not on another;
One field would be rained upon while another on which it did not rain would wither.” (Amos 4:7)

Despite this correlation of rain and justice, the Tanakh and the Gemara see a side of mercy as well. Our Gemara (Taanit 3) tells us that while there may not be rain, there is always dew, wind and clouds. Otherwise the world would cease to exist. The prophet Hosea uses this metaphor when he talks about God dealing mercifully with Israel: 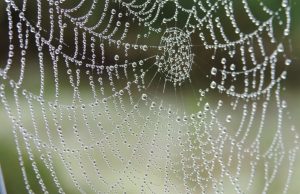 Dew is a constant in the world, even when we do not deserve rain. And even rain can be given to the unworthy. The most famous set of stories about drought in Tanakh are the ones about Elijah the Prophet. Elijah declares a drought because of the unceasing idol worship of King Ahab, Queen Jezebel and the people. This is a rare example of God “giving” the key of rain into the hands of the prophet. And just as Elijah has taken away the rain, he must be the one to return it. But he does not want to, Israel does not deserve the rain. To convince him, God takes him on a journey through the land and he sees the suffering that the drought has created. Only once he has to bring a dead boy back to life (yet another key) does he realize that rain has to return to the land, whether or not the people are worthy (Based on Rabbi Elchanan Samet’s book Pirkei Eliyahu).

Rain, a seemingly neutral weather phenomenon, is a powerful agent of God in the world. Welcome to Masechet Taanit, may it bring the rains with it!