In our discussion of vows and what makes them work, the Gemara discusses  vowing via a Torah scroll:

“It is taught in a baraita: One who takes a vow by associating an item with a Torah scroll has not said anything; with what is written in the Torah scroll, his statement is upheld.” (Nedarim 14b)

For those of us who grew up with American movies and television, the concept of placing your hand on a Bible and swearing seems commonplace. The Gemara’s distinction between vowing by a scroll or by what is written in the scroll seems pedantic but it does make all the difference. A Torah scroll, while imbued with holiness, is only a physical object. Its power lies in the words it contains. The RaN explains that while you are vowing you are thinking of God’s name that is written multiple times in the Torah.

We have discussed the role of the scribe in writing a Torah in another article (see here). Let’s take a look at the Torah scroll itself and what we know about it.

Torah scrolls have to be written on animal skin, which is called gvil (the outer part of the skin) or klaf (the inner part) Today most Torah scrolls are written on klaf which is considered to be smoother and better quality. Any kosher animal’s skin can be used but calves are most common. We do have scrolls written on deerskin and they look different and special. A famous one is the scroll in the Ramhal synagogue in Akko; it was written on deerskin with pomegranate ink, a definitely unusual scroll. 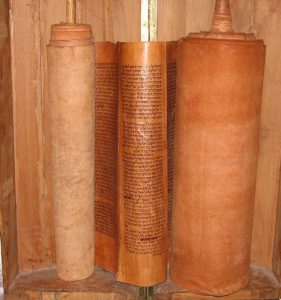 The last commandment in the Torah is that each (male) Jew should write his own Torah scroll. This is derived from the verse in Devarim:

The Sefer HaChinuch, a medieval halachic work, explains the rationale for this 613th commandment:

“It is from the roots of the commandment [that it is that] since it is well-known about people that they do all of their things according to what is prepared for them, therefore He, blessed be He, commanded that there be a Torah scroll prepared with him, that he can always read from it and that he not need to walk for it to the house of his fellow; ‘so that he will learn to fear the Lord,’ and know and understand His commandments that are more precious and desirable than much gold and fine gold. And we were commanded – each and every one of Israel – to make efforts about this, even if his fathers left him one. [This is] so that scrolls proliferate among us and we can lend them out to the one whose hand not be able to purchase it; and also in order that each and every one of Israel read from new scrolls, lest their souls be sick of reading in the old scrolls that their fathers left them.” (Sefer HaChinuch #613)

Since writing a Torah requires skill, time and much concentration, most people do not do it themselves but if they want to fulfill the commandment they will hire a scribe to write a scroll for them, to own privately or to donate to a synagogue. The phenomenon of individuals owning their own scrolls is mentioned in the Gemara in Yoma where we hear that people would bring their own scrolls to the Temple courtyard to have with them when the high priest read from his own scroll on Yom Kippur.

The oldest Torah scrolls that we have today are the Dead Sea Scrolls. We have fragments of every Biblical book except Esther, but very few whole scrolls. About one hundred and fifty years ago a famous forger named Moses Wilhelm Shapira tried to pass off pieces of a Torah scroll as the scroll that belonged to Moses (!); when his deceit was discovered he committed suicide. Today there are scholars who suggest that Shapira may actually have unknowingly found some Dead Sea Scroll fragments and they were indeed very ancient.

The Isaiah scroll from the Dead Sea Scrolls (Wikipedia)

A truly old scroll that is not only not a forgery but is still in use is the one in the Abuhav synagogue in Tzfat. This structure, perhaps the most beautiful of all of Tzfat’s colorful synagogues, is named for Rabbi Isaac Abohav. He was a Spanish rabbi who lived in the 14th century. Tzfat’s community became great in the wake of the Spanish expulsion at the end of the 15th century, so it is strange to connect Abuhav, who lived and died in Spain, with this city. Tzfat legend solves the mystery by explaining that Rabbi Abohav, distressed that his synagogue had been turned into a church after the expulsion from Spain, beseeched the Jews of Tzfat in a dream to transport his synagogue to Israel. The Tzfat rabbis prayed and the synagogue miraculously appeared. 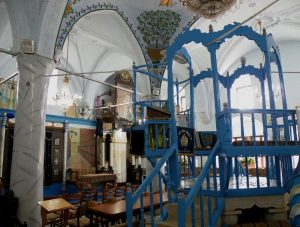 Whether we believe that Tzfat story or not, the Abohav synagogue is the resting place of a Torah scroll that dates back to the 14th century and that probably is what gave the synagogue its name. Such an ancient scroll is usually not usable, since some letters may have been rubbed out or parchment worn away. However, this scroll is still kosher! It is taken out and used only three times a year, on the holidays whose acronym is כשר, kosher: Kippur, Shavuot and Rosh Hashanah.

Torah scrolls have been part of Judaism for centuries, as a source to learn from but also as the major accessory and holy object in the synagogue. But did people swear on them? We certainly have many (some apocryphal) stories of people dramatically saying that they swear on the Torah. One terrifying example is not of swearing but of asking the scrolls to bear witness. In May 1948, as the Jews in the Jewish Quarter of Jerusalem were surrounded by hostile Arabs, they gathered in the complex of the Four Sephardic Synagogues. This building was like a bomb shelter since it was built underground. As surrender became inevitable, the Jews in the synagogue were distraught. The Jordanians outside had massacred the fighters of Gush Etzion just two weeks earlier. Who knew what their fate would be? The Jewish Quarter residents opened the Torah ark in the Rabban Yohanan Ben Zakkai synagogue and recited the vidui, the confession before death, in front of the scrolls. Fortunately this terrible moment did not play out the way the Jews thought it would. At the surrender the Jordanian general Abdullah a Tel was shocked at the miniscule number of Jewish defenders. He took the men as prisoners of war and the women and children were sent out of the Jewish Quarter into exile. Not a happy ending but fortunately not a massacre. Today the synagogues have been restored and the arks contain Torah scrolls again. 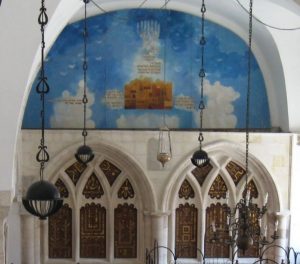