On daf 46 the Mishnah introduces us the concept of בצק חרש, “deaf” or unresponsive dough. There does not seem to be a time limit on dough becoming hametz according to the Mishnah, just an “eye test;” see how it looks or compare it to another dough that was made at the same time. But the Gemara wants to set a time limit and it does so in a rather strange way:

“Rabbi Abbahu said that Rabbi Shimon ben Lakish said in the time it takes a person to walk the distance from Migdal Nunia to Tiberias, which is a mil.”

Says Rabbi Shimon ben Lakish (Resh Lakish, a second generation amora who lived in Tiberias): If the amount of time it takes to walk from Migdal Nunia to Tiberias, which is a mil, has passed then assume that your dough is leavened. In a parallel passage in the Jerusalem Talmud (21a), Rabbi Hanina bar Hama, a first generation amora from Zippori, does not mention places but says that if you have no other dough to compare your deaf dough to, the amount of time needed to make dough leavened is the amount of time it takes to walk four mil.

The Gemara then continues and discusses another statement of Resh Lakish brought by Rabbi Abbahu about how far one must travel in order to keep three mitzvot: immersing a bowl in the mikveh to make dough in purity, praying in a synagogue and finding water for washing one’s hands. In this case, the distance is four mil.

We have a number of questions here. How long is a mil and how long does it take to walk it? Where are Migdal Nunia and Tiberias and are they really one mil apart? Why does the Jerusalem Talmud give a different distance?  And what is the connection to the other activities that require a four mil walk?

The simplest question to answer (although even that has controversy) is how much is a mil. It seems to be equivalent to a Roman mile, meaning approximately a kilometer and a half, slightly less than a modern mile. To walk a Roman mile would take the average person about twenty minutes. Four mil is six kilometers, something that would take over an hour. So we have a substantive difference in the time the Bavli and Yerushalmi think it takes dough to rise. That in itself is not surprising but the parameters set out in the Bavli are. Tiberias is the town we know well on the shores of the Sea of Galilee. Migdal Nunia seems to be the town mentioned in many places in Rabbinic literature, the New Testament and Josephus as Magdala (more on that later). We know where it is and it is just about four mil from ancient Tiberias to Magdala. There is no way that it is a mil and there is also no way that Resh Lakish, a resident of Tiberias, did not know that. So what is going on here? 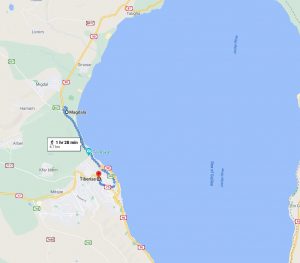 It seems we have a Land of Israel tradition that was taken and “updated” by the Babylonians to fit their halachic viewpoint. Resh Lakish, following the Land of Israel halacha, stated that you have up to four mils walk till your dough is leavened. He illustrated that idea by talking about a journey familiar to anyone in the Galilee: the distance between Migdal and Tiberias. He continued by talking about other halachic obligations that have a connection to the same distance, four mil. When the Babylonians came to put down their version of the law, they did not agree with this amount of time. They believed that dough rises in a much shorter time (and that is the halacha today, a maximum of eighteen minutes until that dough must go in the oven). Not knowing the Land of Israel geography, they adopted Resh Lakish’s statement but “emended” it to reflect the halacha as they saw it: the time it takes to walk a distance of one mil. They were unaware that this distance does not fit with the places that they are referencing.

And where is this Migdal Nunia? This is a town that has a number of names. Migdal Nunia literally means the Tower of Fish, a logical name for a town by the Kinneret where presumably lots of fishing was done. It is also called just Migdal or Magdala in English and as such it appears in other places in Rabbinic literature and more famously in the New Testament. Jesus comes to preach in Magdala and has a wealthy woman there who is his follower, Mary Magdalene. This Mary is the one who discovers his tomb is empty after three days and goes to tell the other disciples. Josephus also mentions the town, in the context of the Great Revolt against the Romans. He gives it yet another name, Tarichae, which means salted fish in Greek and fits nicely with Migdal Nunia. 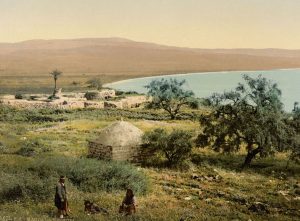 Since we clearly know where the town was located, have archaeologists found evidence of Migdal Nunia/Magdala/Tarichae? Yes they have. Already in the 1970s Franciscan archaeologists from the Custodia Terra Sancta excavated a site north of Tiberias and found a wealthy, well planned town with a market, public fountain and more. Unfortunately, these excavations are currently off limits to the public. But in 2009, an area slightly north of these excavations was bought by a Mexican Catholic named Father Juan Solana. He planned to create a hotel and worship center here, at this site that is so holy to Christians. However, before anything can be developed in Israel, a salvage excavation has to be conducted first. The archaeologist, Israeli Arab Najar Arfan, called Father Solana soon after starting. He had bad news and good news: the bad news was that it would be quite some time before construction could start. The good news? The team had excavated a suburb of the town. It included homes, mikvaot, and a market with vats for . . . salted fish.

But the most significant discovery was a synagogue dating from the first century BCE, one of the oldest synagogues ever found in the land of Israel. Exciting for Jews but also for Christians. If Jesus did indeed come to Migdal, he definitely preached in this synagogue. 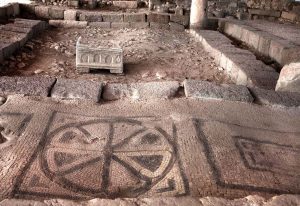 The synagogue at Migdal has many things in common with other early synagogues: benches, pillars – but one find is unlike anything yet found in the Land of Israel. It is a short stone decorated all over with carvings, including a large menorah. It is too short to be a table and not quite comfortable enough to be a chair. What is it? We really do not know, but one suggestion that has been made is that the stone, decorated with symbols of the Temple, was a way for the worshippers at Migdal to feel a connection to Jerusalem. They may not have been able to go up to the Temple very often, but they would be reminded of it every time they came to synagogue to study and pray. Even if Jerusalem was more than four mil away. 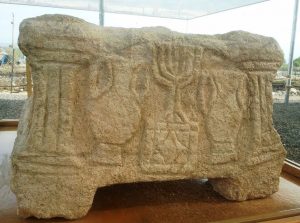 Thanks to Dr. Hagi Amitzur and to Itzhak Jamitovsky of the Facebook group Talmudic Archaeology for their help.