In a Lod State of Mind

A side story on today’s daf seems to have a negative view of the city of Lod. The Gemara reports a conversation between Rabbi Simlai and Rabbi Yochanan where Rabbi Simlai asks Rabbi Yochanan to teach him Sefer Yochsin..According to many commentators, this is the part of Divrei HaYamim, the book of Chronicles, that deals with the genealogy of the tribes of Israel. Rabbi Yochanan wants to know where Rabbi Simlai is from and upon hearing that he is from Lod and lives in Nehardea, refuses to teach him. Rabbi Yochanan claims that we do not teach people from Lod and from Nehardea and you are from both those places! There is a somewhat different version in the Yerushalmi (Pesachim 5,3) where Rabbi Simlai asks to be taught not Sefer Yochsin but aggada in general. Rabbi Yochanan refuses because his tradition is not to teach aggada to “southerners” דרומי or Babylonians. Why? They are coarse (גסי רוח) and ignorant (מעוטי תורה). The southerners in the Yerushalmi version are also the people of Lod. In the time of the Gemara, south meant anywhere in Israel south of the Galilee. Lod is in the center of the land of Israel but it is referred to as דרומא, south.What is going on in this story? What do we know about Lod and why does Rabbi Yochanan look down on the residents of Lod and the south? 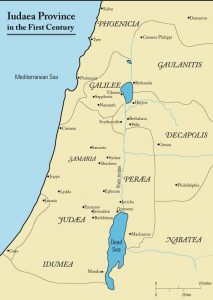 Lod is mentioned in Tanakh as one of the towns of the tribe of Benjamin. During the period of the return to Zion, the people of Lod feature in the lists of returnees written in the books of Ezra and Nehemia. It is centrally located, about a day’s walk from Jerusalem, and on the border between the coast and the Shfelah (lowlands). Lod was known as a wealthy city and its merchants were well known. Some products were even named after the city: “Lodian” barrels, a special “Lodian” cake made from wheat.

Most significantly for our purposes, Lod was a city of scholars. Among the important rabbis who resided in Lod were Rabbi Eliezer ben Hyrcanus and Rabbi Tarfon who were both wealthy men as well. We hear about other scholars who pass through Lod or reside there for a time: Rabbi Akiva and Rabbi Yosi haGelili are notable ones. In fact, Rabbi Akiva examined forty pairs of new moon witnesses in Lod (Mishnah Rosh haShana 1:6). The midrash talks about it as being second only to Jerusalem in importance.

Lod was also well known for the rabbinical meetings held there. Certain homes seem to have hosted the rabbis and their pronouncements became associated with these places. The most famous of such meetings was held in Nitza’s attic (עליית בית נתזה) where the rabbis determined the list of sins that one must be killed for, rather than transgress (Sanhedrin 74). This probably took place during the time of religious persecution in the wake of the Bar Kokhba Revolt. A different famous meeting held there, recounted in Kiddushin 40, discussed the question of whether study or action is greater. Rabbi Tarfon and Rabbi Akiva were both present and Rabbi Akiva’s opinion, that study is greater because it leads to action, won the day.

At one point, like many places in the Land of Israel, the people of Lod were persecuted by the Romans and there are famous stories of martyrdom that occurred there. One of these stories was mentioned in our masechet just a few weeks ago. Pesachim 50 talks about the martyrs of Lod, הרוגי לוד. Rashi explains that these were two brothers, mentioned elsewhere as Pappos and Lulianos, who claimed to have committed the crime of murdering a princess, rather than allowing the whole city to be punished.

Lod eventually became a Roman city named Diospolis, city of the god. It presumably became more pagan but many Jews from different places still lived there. It was known for its elaborate synagogues and wealth. However, by the fourth century, with the changes in the Roman empire, Lod’s fortunes had gone down. Midrash Esther Rabba says that if there are ten portions of poverty in the world, Lod has nine of them, a great downfall from its glory days.

In the time of Rabbi Yochanan however (mid third century), Lod was still rich, powerful and learned. In addition, Rabbi Simlai, far from being a boor was a famous baal aggada, a master at explicating and teaching the text. Why does Rabbi Yochanan insult him and all other Loddites? 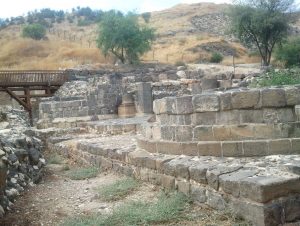 The gates of Tiberias in Roman times (Wikipedia)

Perhaps the answer lies in the fact that most of the prominent Lod rabbis are Tannaim, active in the early-mid second century CE. These were Lod’s true glory days.. But after the Bar-Kokhba revolt, the areas near Jerusalem  lost much of their Jewish population and the center of intellectual life moved north, to the Galilee. By the time we get to Rabbi Yochanan and Rabbi Simlai (Amoraim, from the mid third century CE) Torah life is firmly based in the north. Rabbi Yochanan is the head of the prominent yeshiva in Tiberias and he is naturally a strong booster of Galilee Torah. Perhaps he cannot imagine that Jewish life can be rekindled in the south and therefore is reluctant to entrust secret knowledge to someone from Lod.

An interesting postscript to this story is a discovery made in Lod in 1996, many centuries after our story takes place. In the course of road construction, an amazing mosaic floor was discovered:It is filled with images of animals, but not of people, and it does not contain any religious symbols. It dates to the late 3rd century but its artist and owner did not leave us any clues as to their ethnicity or religion. Could it have belonged to one of the Jews still left in Lod at that time? 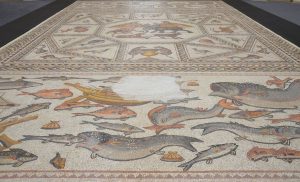