In honorof Rabbanit Michelle and the Hadran learners, who are paradigms of renewal.

This short masechta deals with “New Year”s.  In Tanach, the only mention of “Rosh HaShana” is in the book of Yechezkel (40:1)

where it apparently refers to the first MONTH of the year, and not the first day (*1).

In the Torah (and the remainder of Tanach(*2)), the months are counted from Nisan, in compliance with the dictum (Shemot 12:2):

Hence, Tishrei is known as “the seventh month,” Adar, as “the twelfth month,” etc.  Why, then, do we consider the years as beginning in Tishrei?

The masechta also discusses the four periods during which the year is judged, and for what:

Since there are many dates and dating systems included in this masecheta, there is also a discussion of the Jewish calendar.  There are two types of astronomical years:

Most of the Jewish calendar is based on the lunar calendar.  As we learned in Sukkah 29a:

Let’s dig a bit deeper into the moon and its phases:

There are 2 different types of lunar movement visible to people on earth: 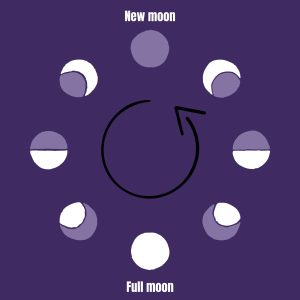 The moon moves around the earth once a month in a west-to-east manner.  At one point in this movement, conjunction occurs.  That’s the point when the moon is directly aligned between the sun and earth.  The next conjunction occurs 29 days, 12 hours, 44 minutes and 3.5 seconds later.  The Rabbis did not divide the hour into minutes and seconds, as we do, but rather used chalakim (portions), of which there are 1080 in an hour. This means that each chelek is equal to 1/18 of a minute (3-1/3 seconds).  So the duration of a lunar revolution would be expressed as 29 days, 12 hours and 793 chalakim (*6).  The precise moment when the new conjunction occurs is known as the molad halevanah (birth of the moon).  The molad is one factor in the determination of the month. The second factor is the actual appearance of the first phase of the moon.

The moon is not innately luminous; it reflects the light of the sun.  Because of this fact, its appearance changes depending on where it is relative to the sun and earth over the course of the month. These are referred to as the “phases” of the moon, which range from a thin sliver (crescent) to a full moon.

When the moon is between the sun and the earth, the moon’s “dark side” faces us, and it is therefore totally invisible to observers on earth.  This is the molad (literally, “birth”), when the moon begins its journey to visibility (which is depicted as its “rebirth.”  A few hours later, since the moon is no longer perfectly aligned with the earth, a thin crescent can be seen.  This is the known as chodesh or chiddush halevana (renewal of the moon).  The moon is seen as having been renewed after its disappearance. As the moon continues its circuit of the earth, more of it becomes visible.  About 15 days later, it is totally visible – the full moon.  Then the dark side starts to turn towards earth and the area we can see becomes smaller and smaller.  This entire cycle takes (as we noted above) 29 days, 12 hours and 793 chalakim (which are equivalent to 44 minutes and 3-1/3 seconds).

Based on this, one would think that:

But we are commanded:

So – while the molad and astronomical length of the month are considered in determining the day on which Rosh Chodesh will fall, we still require kiddush HaChodesh (sanctification of the new moon).  This is a mitzva for the Sanhedrin (supreme rabbinical court of 71)(*9), with any three members authorized to sanctify the day, and is performed in Israel (*10).  In exigent circumstances, the Sanhedrin may authorize non-members who are qualified to complete the sanctification.

While primarily based on the lunar cycle (with each month approximately 29.5 days), there is also a requirement that Pesach occur in the spring, which is a solar event.  This requires periodic adjustments in the calendar, to ensure consistency with the mitzva of (Devarim 16):

Originally, the New Moon was declared by the bet din upon evidence from eyewitnesses.  However, even when this was the system, the bet din would make note of the astronomical calculations that validated or invalidated this testimony. Interestingly, these early sages realized that time is not uniform, and that there is a need to set a fixed baseline, just as Greenwich Mean Time is used today. (*12)  They established the location of the Sanhedrin in Israel as that baseline, and all calculations proceeded from there. These calculations were used to double-check testimony by the eyewitnesses.  As persecution of the religious authorities increased, and autonomy decreased, Hillel the Second established a fixed calendar based on these calculations. This calendar is still in use today.

The Process of Kiddush HaChodesh

The witnesses would travel to the Bet Din, where they were screened for eligibility and reliability.  If they were acceptable, they would be questioned as to what exactly they had seen.  It is fascinating that the court used visual aids to clarify testimony, with pictures of the various phases and positions shown to the witnesses. Assuming that the court accepted their testimony, Bet Din would declare that day as Rosh Chodesh.   Note that despite the reliance on eyewitness testimony, Rosh Chodesh could only fall on the 30th or 31st day of the previous month. For example, if there were clouds which obscured the sky until the 33rd day, the Bet Din would use astronomical calculations to proclaim the new month.

If the witnesses gave acceptable testimony on the 30th day (meaning they had seen the new moon the evening before), the Bet Din would declare that day as Rosh Chodesh, which meant that the preceding month was 29 days long, known as Chasser (deficient), since it did not have the full 29-12-793 length of the cycle. If witnesses did not appear with acceptable testimony on the 30th day, the next day (the 31st) became Rosh Chodesh.  Then the previous month was declared Maleh (full) or Me’ubar (pregnant) because it had more than 29-12-793.

The fact that Rosh Chodesh could be on day 30 or 31 impacted on the date of the holidays within that month.  For example, if Rosh Chodesh Nisan could be either on Sunday or Monday, then Pesach (which is celebrated on the 15th) could be on Monday or Tuesday.  Bet Din needed to notify the far-flung communities of the exact date. Places that did not get the notification in time observed two days because of this doubt.  This is known as Yom Tov Sheini shel Galuyot (the second day of the diaspora).

This system existed until 358 CE. Due to persecution, the functioning (and existence) of the Bet Din was unable to continue.  Rabbi Hillel (*13), based on his authority as head of the Bet Din, instituted the current calendar, calculating and sanctifying every Rosh Chodesh “until the coming of Mashiach,” and suspending sanctification based on testimony.

Since the lunar year is 354 days (29.5 x 12) long, there is a “shortfall” of about 11 days as compared to the solar year of 365.25 days. In order to keep Pesach in the spring, as noted above, the court must occasionally add a month (*14) to the calendar, known as Adar Sheini (second Adar). When the calendar was based on testimony and calculations, the Bet Din would decide which year should be extended.  According to the fixed calendar, however, there are 7 leap years in a 19-year cycle.