(In “Yeshivish,” this masecheta is often called “Bei’ah,” the Aramaic word for “egg.”)

Masechet Beitzah, known in  Talmudic literature as Masechet  Yom Tov (holiday), deals with the  laws which are common to all the  holidays, as opposed to the  festival-specific laws which are dealt with in their respective  masechtot (Sukkah, Pesachim,  Yoma, Rosh HaShana and  Megilla), and the laws of Chol HaMoed (in Moed Katan). The  name of the masechta derives from the first case discussed, the status of an egg that was laid on Shabbat or a holiday.

The primary focus is the obligation to rest from work, as expressed  through both positive and negative commandments. This is derived  from two pesukim:

Just as intentional creative work is forbidden on Shabbat (the 39  melachot, found in Shabbat 73a), there is a prohibition of melacha on the holidays, with two primary differences:

Not all activities related to food preparation are permitted. There is  a debate among the commentaries whether the excluded activities  are prohibited on a Torah level or were added by the Rabbis as a  “safeguard” for the sanctity of the holidays. The distinction is made  between activities that prepare the items to become food (such as hunting and harvesting) and the actual food preparation (cooking  and baking). Although on a Torah level, we can do what is necessary for food preparation, the Rabbis limited this permission so that the  holidays would retain an extra dimension of sanctity. At the same  time, based on the principle of Beit Hillel on 12a: לצורך ה שהותר מתוך לצורך שלא נמי הותרה) Since [the melacha] was permitted for a [food related] purpose, it is also permitted even when there is not that  purpose). For example, since one is permitted to transport food  from one house to another, one may carry other items needed on  the holiday as well.

In some cases, the Rabbis were stricter with regard to holidays than  with Shabbat, since the more lenient punishment status and ability  to perform some activities forbidden on Shabbat might lead people  to take the holidays lightly. On the other hand, there is a special  mitzva to rejoice on the holidays (Devarim 16:14-15):

We have already seen in Pesachim (109a) that this joy is expressed  by food, drink and wearing special clothes. The Rabbis needed to balance between these two sometimes opposing mandates: to honor  the holiday as a day of respite and to allow people to rejoice. This  concern will be discussed in several places in the masechta.

When Shabbat and a holiday occur in succession,  with the holiday on Sunday or (more critically) on  Friday, additional issues arise. We cannot prepare  for one day to the next on a holiday. How then,  especially in a time without the ability to prepare  food in advance and store it safely, can we prepare  for Shabbat if the holiday is on Friday? The main  solution for this issue is the rabbinic enactment of  the eiruv tavshilin (the joining of cooked foods), which allows one to  prepare food on the Friday holiday for Shabbat.

A second issue is the rabbinic enactment  that people living outside the land of  Israel are required to observe a second  day of the holiday (yom tov sheini shel  galuyot – the second holiday of the Diaspora). This decree was originally  established because of problems in timely  and accurate communication between  Israel (where the new month was sanctified and declared) and the  far-flung communities of Jews outside the land of Israel. The Rabbis  decreed that those communities observe two days for the holiday;  one would certainly be the correct one (since there are astronomical and mathematical limitations to when the new month can begin – it  only varies by one day). (More about this when we learn Masechet Rosh haShana!) This enactment continued (for a variety of  reasons) even when the calendar was fixed and dates of holidays  predetermined for millennia.

The laws of muktzeh comprise a significant  portion of the  discussions in this  masechta. The word  muktzeh literally  means “set aside,” and  refers to objects which  usually are not intended for use on Shabbat or holidays. As we  learned on Shabbat 123b, the decree of muktzeh dates back to the  early days of the Second Temple, when Nechemya ruled that these  objects may not be handled or moved, as a safeguard for the  sanctity of Shabbat and to prevent people from inadvertently transgressing by using these objects.(*)

* There are other reasons given for this enactment: So that Shabbat would be discernably different from weekdays  (based on Isaiah 58:13), and so that those who do not usually engage in labor would have a distinction made for  Shabbat. The Raavad claims that the original decree was to prevent people from transporting utensils from one  domain to another. Later, it was modified to exclude utensils that would be used for permissible activities.

There are several categories of muktzeh, with the underlying  consideration being the idea that the item was not מוכן prepared before Shabbat. Note that the preparation does not have to be overt  – if an item is normally used for permissible activities, it is  considered prepared. The Shulchan Aruch lists the following  categories of muktzeh:

The prohibitions of Muktzeh: 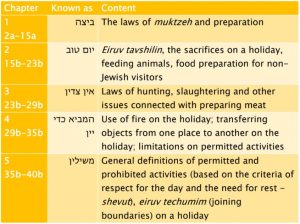