One of the most enduring Jewish values is that of bringing a baby boy into the covenant through circumcision, brit milah. On today’s daf (Yevamot 72) we hear about a few situations where Jews were unable or unwilling to keep this formative commandment. Where and why would Jews not have circumcised their children?

Our Gemara begins by looking at a strange story in the book of Joshua. After the Children of Israel cross the Jordan and enter the land on the tenth of Nisan, Joshua performs a mass circumcision on all the men:

“At that time the LORD said to Joshua, “Make flint knives and proceed with a second circumcision of the Israelites.” So Joshua had flint knives made, and the Israelites were circumcised at Gibeath-haaraloth. This is the reason why Joshua had the circumcision performed: All the people who had come out of Egypt, all the males of military age, had died during the desert wanderings after leaving Egypt. Now, whereas all the people who came out of Egypt had been circumcised, none of the people born after the exodus, during the desert wanderings, had been circumcised.” (Joshua 5:2-5)

The reason the milah needed to be done at the same time as they entered the land is that in three days it will be time to bring the Passover sacrifice and only circumcised men are allowed to eat from it (women obviously do not have this pre-condition). But the Gemara asks the obvious question: why did the people not circumcise all those long years in the desert? How can that be excused?

The answers given are all on the theme of the danger of undergoing an operation under difficult conditions: they were weak from travelling or the weather did not cooperate. The Gemara is split on the question of whether this was a punishment for the Israelites or not. It certainly seems to indicate negligence or at least a rather laissez faire attitude to a seminal commandment. But one can also read the story in a different way, as does Rabbi Israel Rozenson, a prominent Bible scholar. Perhaps rather than seeing their lack of milah as negligent, we could look at it as prescient. They chose to save this moment of covenant renewal for a special occasion, entrance into the land. Brit milah, accompanied by that other covenantal mitzvah, the Passover sacrifice, is a way to declare their connection with God as they begin a new chapter in their history. 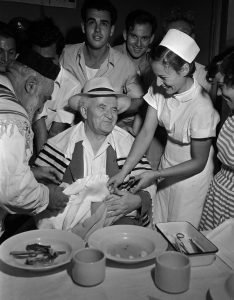 Circumcision became an inseparable part of being a Jewish male. The greatest enemy of the Israelites in Biblical times, the Philistines, are routinely referred to as the uncircumcised, to emphasize how different they are. In Roman times, according to Professor Shaye Cohen, it was practically the only foolproof way you could know who was a Jew and who wasn’t since Jews dressed, looked and sounded like everyone else. Because it was such a strong identity marker, there were periods where Jews were forced to not circumcise and there were periods where some Jews chose not to be circumcised, wanting to blend in.

In the very first chapter of the first book of Maccabees, we have a description of both these situations. As Hellenism spread throughout the ancient Near East, some Jews were swept up in the tide of this new popular culture. A large part of the Hellenistic lifestyle was showing off the beauty and perfection of the (male) body, especially by playing sports in the nude. Hellenists saw the body as perfect and believed that circumcision was a terrible mutilation of it. So Jews who wanted to blend in and be part of the games needed to hide their milah, by pulling at the foreskin to cover it up:

“whereupon they built a place of exercise at Jerusalem according to the customs of the heathen and made themselves uncircumcised, and forsook the holy covenant, and joined themselves to the heathen, and were sold to do mischief” (Maccabees I 1:17)

What began as an attempt of Jews to assimilate turns more sinister when the Seleucid Greek king Antiochus IV decides to force all Jews to stop circumcising their sons:

“That they should also leave their children uncircumcised, and make their souls abominable with all manner of uncleanness and profanation: To the end they might forget the law, and change all the ordinances.” (Maccabees I 1:48)

These decrees, as well as the polluting of the Temple, lead to the Maccabean revolt and a major change in human history, as Judaism fought back against the overwhelming tide of Hellenism and assimilation. 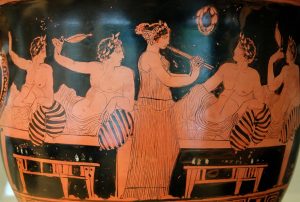 Reclining at a Greek symposium (Wikipedia)

The next time we hear about circumcision being outlawed is during the Bar Kokhba Revolt, in the second century of the Common Era. The Roman emperor Hadrian forbids the Jews to circumcise. This seems to have been part of a larger Roman policy against anyone mutilating their bodies, whether through circumcision or castration, whether by Jews or Gentiles. Naturally the decree was felt much more strongly by Jews, for whom circumcision was a part of their religion. Whether Hadrian’s decree precipitated the revolt or was a consequence and punishment for it is unclear. We do not have enough sources about the Bar Kokhba period to know (yet). But our daf adds a fascinating small detail: it seems that during the time of Bar Kokhba (called Ben Koziba here), Jewish men were forced to cover up their milah. This is different from what we saw before: here Jews who had already been circumcised as infants were forced by the Romans to look like them, to hide the sign of the covenant. The Jews did not choose this route in order to blend in but rather it was part of the Roman persecution. Forbidding circumcision altogether was a logical next step.

The Bar Kokhba Revolt, which we commemorate during these days of the Omer and particularly this week, on Lag BaOmer, was a terrible failure. However, it seems that a few years later the Romans backed down on their decree and Jews were permitted to do brit milah again. It remained and remains THE marker of a Jewish male, especially after early Christianity interpreted circumcision as a spiritual and not a physical demand (circumcise your hearts and not your bodies). Throughout history, during times of persecution, Jewish men were at risk because they carried this sign on their bodies. Jewish parents put themselves and their sons in danger, understanding that the covenant needed to be carried on. And every time we attend a brit ceremony, we are witnesses to the power of this four-thousand year old mitzva, as it is passed on to the next generation. 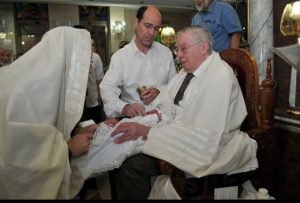