Key to Your Heart

The last chapter of a tractate often includes a roundup of all sorts of miscellaneous ideas. For my last post in Eruvin I am also going to do a roundup and talk about some of the architectural elements mentioned in pages 101 and 104.

The Mishnah on page 101 states:

“A person may not stand in the private domain and open a door located in the public domain with a key, lest he inadvertently transfer the key from one domain to the other. Likewise, one may not stand in the public domain and open a door in the private domain with a key, unless in the latter case he erected a partition ten handbreadths high around the door and stands inside it. This is the statement of Rabbi Meir.”

The idea that one can be in the public domain (on the street) and open a door to a private domain (a house) makes sense to us. The other possibility, standing in a private domain and opening a door to a public domain, seems less likely. Professor Zeev Safrai says that the Mishnah is talking about a gate in the public domain, i.e., a gate to the alleyway מבוי. This gate itself creates the eruv and makes it permissible to carry in the alley. Professor Safrai takes us back to the very first Mishnah in Eruvin which talks about having a צורת הפתח, a doorway, that allows carrying. He cites the parallel Yerushalmi where Bet Shammai says one must have not only the shape of a door, but a real door, with a lock:

“Hanina the nephew of Rabbi Yehoshua said Bet Shammai says a door on one side and a door on the other and when he enters he locks the door.”

Even Bet Hillel says you must have a physical door on one side, it seems that only later do the rabbis allow the more abstract beam or a shape of a door. Have we found such doors in ancient towns? Safrai shows that in Ein Gedi and Sussia, towns from the time of the Gemara, there are alleyways open at one end מבוי שאינו מפולש that have a proper gate at the opening. He says we also have such structures in non Jewish towns, showing that it was not only a halachic convention but a necessary device for security or privacy. 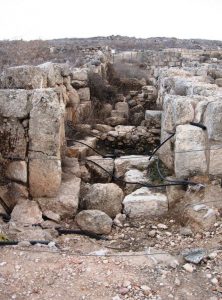 Sussia alley with the remains of a gateway (Wikipedia)

Do we have evidence of ancient keys? We have found evidence of keys and of keyholes. An interesting example of a keyhole is on a burial cave door found in Bet Shearim. Bet Shearim had a fabulous necropolis with burial caves from the time period of the Mishnah and the Gemara. Just like wealthy people wanted a fancy door in life, they wanted one in death. Even though these doors would not be used often, they had artisans carve out stone copies of their wooden house doors. This gives us a great peek at what architectural details looked like in the time of the Gemara. Here we can see the ornate door with a little keyhole on the right side:

Keys have been found in a number of places but the most poignant ones are the keys found in the Bar Kokhba hideout caves. During the time of the Bar Kokhba Revolt (132-135 CE) many Jews fled their homes for the relative safety of caves underground or in the desert. They brought their important possessions with them, including of course their house keys for when they would return home. The fact that these keys have remained only to be discovered by archaeologists many centuries later tells us the fate of the homeowners. 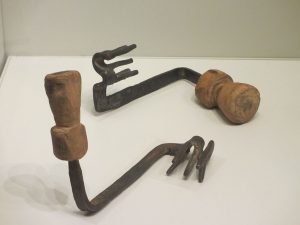 On page 104, in one of the final mishnayot of the tractate, we hear about cisterns in the Temple and nearby and how one may draw water from them:

What is a wheel, a גלגל, mentioned here? In order to have a lot of water, cisterns must be deep. To raise the water, a rope and a bucket are necessary. But the Mishnah is talking about a more sophisticated contraption, with a wheel or more likely two wheels. This is what is known in other places in the Talmud as an Antalya Well באר אנטיליה. This mechanism, already used in ancient Egypt, has a vertical wheel with buckets attached to it. Another horizontal wheel is attached on top and an animal circles and pulls the top wheel, which moves the bottom wheel, which raises water from the well and then spills it out, usually to the fields. This device was used until very recently as it is clever and labor saving. Here is a copy of the one used in the Mazkeret Batya colony in the late 19th century: 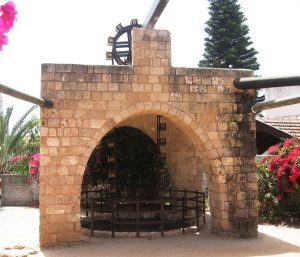 Finally, what is the Heker Well? We have various explanations for the etymology of the name, none of them very convincing. Safrai brings a suggestion that it is not the Heker well but the Hakra or Acra well. What is the Acra? This was a formidable fortress built by the Greeks when they ruled Jerusalem. When the Maccabees finally threw the Greeks out of the city, they demolished the fortress. Archaeologists have been looking for it for over a century and recently thought they found it in the Givati parking lot by the City of David. Now this conclusion is not really accepted anymore and the search continues. Safrai suggests that drawing water from the well was allowed during a battle that the Maccabees had with the Greeks, and then allowed thereafter. Perhaps a bit farfetched but it does get us into the Chanukah spirit! 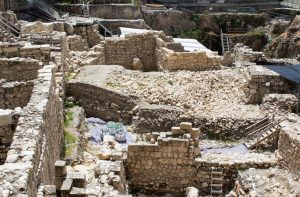 Suggested site of the Acra in the Givati parking lot(Wikipedia)