Tomorrow we start not only a new tractate but a new order/seder as well. While the name of Seder Nashim – women – might lead us to think we will be dealing with mitzvot that women do, or religious obligations for women or even something about women’s lives, this is not really the case. Nashim, as the first few tractates will show us in exhaustive detail, is mostly about men – who they can marry, how that marriage is carried out and how can it be ended. Of course, women are a part of this story – ketubot protect women’s rights, gittin allow them to remarry and marriage is a partnership between a man and a woman. Still, if you were hoping to understand the inner life of women in Talmudic times, you will only find glimpses here and there.

What is missing in literature is sometimes found in archaeology. So in honor of Seder Nashim as well as International Women’s Day (who says Flashback is not up on current events), let’s take a look at some depictions of women in the archaeology of Talmudic times.

The best place to find out what women might have looked like is in mosaics. Probably the most famous portrait of a woman from Byzantine period Israel is the extraordinarily beautiful mosaic in Zippori known as the Mona Lisa of the Galilee. This lovely woman is the centerpiece of a gorgeous mosaic floor in the triclinium (dining room) of a private house in Zippori from the third century CE. The precision with which her face is created makes it hard to believe that she is made out of stones and not painted. Who was she? Some suggest she may have been the lady of the house. If so, was she really that beautiful or did the artist give her a little ”cosmetic surgery” so that he would get paid? And who were the owners of the house who chose to have a woman’s face as the centerpiece of their dining room? The rest of the mosaic depicts scenes from the life of the Greek god Dionysus so this was probably not a typical Jewish family. In fact they may not have been Jewish at all. Zippori was a mixed city with Jewish, pagan and Christian residents. 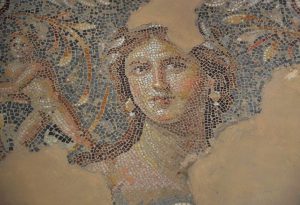 Other, less spectacular women, adorn the synagogue mosaics in Bet Alfa, Hamat Tverya and Zippori. At the corners of the zodiac mosaic, seen in all three sites, are women who depict each one of the four seasons. They wear seasonal garb – Ms.Winter has a heavy shawl – and also have produce or tools appropriate to that time of year shown next to them. 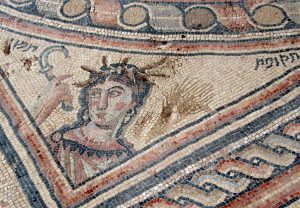 Some of the mosaic women are wearing jewelry, leading to other archaeological discoveries that show us that some things are timeless. Jewelry, makeup and perfume bottles have all been discovered in various sites. A few years ago, in the excavations in the Givati parking lot by the City of David in Jerusalem, a stunning earring, made of gold and precious stones, was discovered in a layer dating back to late Second Temple times. The likely reason it is there is sad but commonplace – someone got a new pair of earrings for the holidays and proudly wore it to Jerusalem, on her pilgrimage. Then she was unlucky enough to lose one earring. But her bad luck is good luck for us, who get a chance to see the fashions of two thousand years ago. Another fascinating find was a small bottle found in the Galilean town of Migdal. It was meant to be worn around the neck, holding perfume, so that the delicate lady did not have to smell all the foul odors surrounding her. 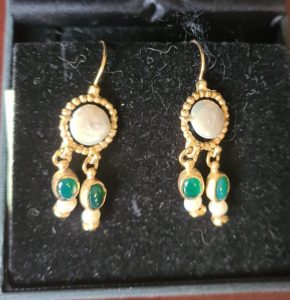 Women do not appear only in pictures. Their names also appear very occasionally. Women donated to support synagogues and churches. We have a few inscriptions that explicitly mention female donors, for example one from Naaran that thanks Halifo the daughter of Rabbi Safra for her donation. Of course, women are also anonymously mentioned when the inscription cites the whole community and thanks them for their donation. An inscription like this was found in the Shalom al Yisrael synagogue in Jericho. It thanks the holy community for contributing to make the synagogue mosaic and asks God to bless them and all the members of their households.

We also sometimes find women’s names on graves or ossuaries. A famous one is the tomb discovered in Jerusalem in the 19th century, north of the Old City. It was so monumental and fabulous that it received the name Tomb of the Kings, with the assumption being that King David and King Solomon were buried here. But it turned out that this was actually the tomb of a queen, not a king. A simple but very elegant stone ossuary was found in the tomb (today it is in the Louvre). It says in Aramaic and Palmyrean Tzadan Malkata, our mistress the queen. Most scholars agree that this is referring to Queen Helene of Adiabene, a woman who was known both by Josephus and the rabbis. She was a convert to Judaism who was fabulously wealthy, supported the poor and donated to the Temple, and eventually moved to Jerusalem and died there.

Finally, we have some evidence of a woman who led a more modest, if equally hectic life. In the 1960s Israeli archaeologists went on a mission to rescue artifacts from caves near the Dead Sea that were being plundered by Beduin. Among the many incredible finds from this mission (including letters written by Bar Kokhba!) was a very neatly wrapped package of documents. They were clearly packed up with care by their owner as she fled from the Romans during the Bar Kokhba Revolt 1800 years ago. The documents – marriage contracts, land sales, etc – belonged to a woman named Babatha who led a complex life. She was married more than once, had property and children from both husbands and legal documents to show for it all. Whether she ever needed them again after she fled to the caves is a poignant question but the fact that we can read them centuries later tells us a lot about women, property and ancient documents. 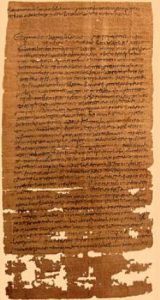 A document from Babata’s archive (Wikipedia)

Happy International Women’s Day to women past, present and future!