Let Your Hair Down

As we enter the fascinating world of Nazirite vows, we will see that it seems to have been rather prevalent in the time of the Second Temple and perhaps for a short time afterwards. But then becoming a Nazir fell out of fashion and we have little or no record of any medieval or modern Nazirites until we arrive in the twentieth century. Here we encounter an extraordinary individual: Rabbi David Cohen, known as the Nazir.

The Nazir (1887-1972) was born to a distinguished rabbinical family in Eastern Europe and traveled all over, studying with the Hafetz Haim in Radin, as well as at Slobodka and Volozhin. He also began to study philosophy and other Western disciplines. He was proficient at languages and knew Greek, Latin, English, German and French besides Hebrew and Yiddish. During World War I he ended up in Basel, Switzerland, where he encountered the man who changed his life: Rabbi Abraham Isaac HaCohen Kook (1865 – 1935). After a philosophical discussion with the mystical rabbi, Rabbi Cohen stayed the night. When he heard Rabbi Kook praying in the morning, he was overcome by his holiness and: “ I became a different man. . . I had found a teacher.”

In 1922 the Nazir moved to Israel and continued to study with Rabbi Kook in his yeshiva, Mercaz HaRav. He also chose to take a Nazirite vow and from then until the end of his life he abstained from wine and grape products and did not cut his hair (he was a Cohen so he stayed away from impurity and dead bodies in any case). In effect, he was a Nazir olam, a lifelong Nazirite. He also became a strict vegetarian, refusing to wear leather as well as not eat meat or fish. In addition, he would refrain from any unnecessary conversation (taanit dibbur) between Rosh Hodesh Elul and Yom Kippur, only speaking of holy things. His long hair became something of a trademark and he was instantly recognizable, a combination of a hippie and a holy man. 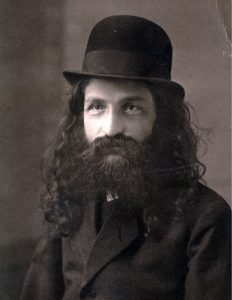 Why did the Nazir take on this lifestyle, something unprecedented in Jewish life for the past two thousand years? One reason was that he wanted to remind the Jews of their past and inspire in them a hope for the future. This is what he wrote in his diary:

“I am a Nazir, a step towards prophecy. If I only merited to come into this world for this reason, to make known again this concept, “Nazir,” as a fact in our days, to remind us that we are on the cusp of reviving prophecy in Israel, it would be enough.”

This quote leads us to the second reason for his choice – he believed that being a Nazirite would help him attain prophecy, a state that he yearned for his whole life. The Nazir tried in many ways to receive prophecy. He would wander through the hills around Jerusalem, find quiet places for contemplation (התבודדות) and even have musicians play music for him to try and bring on this ecstatic state, as it says in the book of Kings:

While he was incredibly well educated and even wrote a curriculum for his school, Mercaz HaRav, that included philosophy and other seemingly secular subjects, the Nazir wanted to focus on what he termed the oral law, the true service of God on the hills and in the fields. In his view, the written books we have (of which he was a master) sometimes make us spiritually smaller and distract us from truly serving God.

With all these lofty ideals, one would think that the Nazir would have been disconnected from the here and now. However, he was very involved in the struggle to create the State of Israel and during British Mandate times his home was a refuge for the fighters of the Underground movements. After the War of Independence, he vowed not to leave his home until the Old City was liberated, and only went with his son-in-law, Rabbi Shlomo Goren, when the latter came to get him in a military jeep on the day the Western Wall was freed. The Nazir also raised up a generation of students who continue to be influential in Israel today, including Rabbi Yaakov and Rabbi Yisrael Ariel, Rabbi Zephaniah Drori and others who are no longer alive like Hanan Porat and Rabbi Haim Druckman.

Rabbi David Cohen led an extraordinary life and had an unusual family as well. His wife, Sarah, was one of the founders of Emun which became Emunah women. She would attend his lectures and he would not start until she had arrived and was seated. His daughter, Tzipiya (as in yearning for the redemption) married Rabbi Shlomo Goren. And his son Shear Yashuv (the name of the prophet Isaiah’s son) was a Nazir from birth. He related that when he was a teenager, a rabbinical court was convened in his home to release him from this status. He fought in the Haganah and was captured by the Jordanians with the fall of the Old City of Jerusalem. Eventually, he became the Chief Rabbi of Haifa and remained a vegetarian and did not drink wine. He passed away in 2016.

In his diary, the Nazir described a visit to Avshalom’s Tomb in the Kidron Valley in Jerusalem. He found it to be a place that was appropriate for meditation and contemplation. In the quiet of the valley, which is still pretty quiet today, he wrote:

“I sat opposite Yad Avshalom and pulled out a pocket Tanakh and read. My soul came to life at the beauty that was there and at the thought of the prophets who had walked here and the prophecy that was still to come. . .” 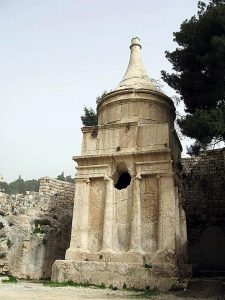 The Nazir died after the Mount of Olives returned to Israeli hands and he was able to be buried alongside his beloved teacher, Rabbi Kook. His tombstone names him as מבשר קול הנבואה , the harbinger of the voice of prophecy. 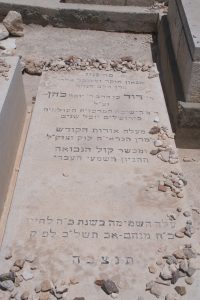 For an excellent article on the Nazir, with many references, see Rabbi Josh Rosenfeld at http://seforim.blogspot.co.il/2013/11/the-nazir-in-new-york.html