In the days before Twitter, Facebook or even radio, how did you get a message out to the world? The first mishnayot of the second chapter of Rosh HaShanah address precisely this question:

Signal fires were a primitive but effective method of communication. We hear about them in other ancient civilizations, in places where the word needed to get out to a large area and sending messengers would take too long. The Greeks developed such a sophisticated system that they were able to spell out letters and thus send actual messages from places to place. The Romans placed towers along the border for the use of their soldiers. We have a depiction of these beacons on Trajan’s Tower in Rome. The signals were usually used in times of war, to alert the army that an enemy was approaching or to send back messages of victory or defeat. In fact we know about signal fires used in this way in ancient Judea. We have inscriptions from Lachish that talk about not seeing the signal fires of any other town except Lachish and Azekah because the other settlements had fallen to the Babylonians. 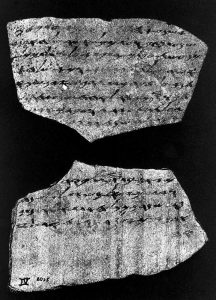 The letter found at Lachish mentioning the signal fires (Wikipedia)

The fires משואות described in our chapter are something different. They are not meant for war but have both a practical as well as a ceremonial aspect. In the days before a fixed calendar, the news about a new month needed to reach the entire Jewish world as quickly as possible. Signal fires were a quick way to get the word out (unless of course they were sabotaged, as we will see in a moment). Where were the fires lit? We have a list of places in the Mishnah, with some additions in the Tosefta:

Can we identify all these places? Har HaMishcha, literally the mountain of anointing, seems to clearly be the Mount of Olives, olives being used to make the oil for anointing. This is also the highest peak in the (ancient) Jerusalem area so it makes sense to light the fire from there, as soon as the Sanhedrin confirmed the new moon sighting. Sartava, also known as Alexandrion, was an ancient Hasmonean fortress in the Jordan Valley; today its distinctive peak is immediately recognizable to anyone driving along the Jordan Valley road. The others are less easily identifiable, Gerofina may be named after Agrippas II and it seems that it was in the Golan, based on an inscription found there. 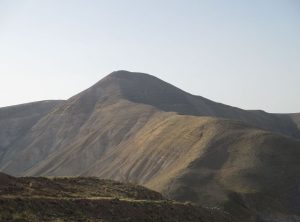 The Gemara (23b) adds that Rabbi Shimon Ben Elazar had a tradition that included a few other places: Harim, Kayar and Geder. They discuss whether these are places in Transjordan or perhaps just other stations between the ones mentioned in the Mishnah. In any case, it seems clear that the stations in the Mishnah had to have been supplemented by other mountains since there is not a clear line of sight between the each mountain. In fact, after the Six-Day War an interesting experiment was conducted (before the war the Mount of Olives and Sartava were in Jordanian controlled territory and off limits to Jews). Tour guide Era Rappaport and his friends split up – some went and lit a fire on the Mount of Olives, near Hebrew University while others went to the Sartava to see if they could spot the flames. They could not. Stage two was to find another, intermediate point. Era went to Mount Baal Hazor, near Bet El, the highest mountain in that area. From there he could see both the Mount of Olives and the Sartaba. Other people tried this experiment a little further east, at Kubet a Najma by Kokhav HaShahar. From there too, both mountains could be seen. So it seems clear that there was an intermediate station at some point between Jerusalem and the Jordan Valley.

Professor Zeev Safrai suggests that the massuot lighting was not just practical but also had a ritual aspect. He bases this on the fact that the language used is ceremonial: waving the torches back and forth מוליך ומביא, like we do with the lulav; as well as the fact that the whole city would light fires on their roof (“It is taught in a baraita: Each and every individual would take a torch in his hand and ascend to the top of his roof and light it.”) He also cites a Yerushalmi that states that long after the destruction of the Temple, Jews still lit the massuot in the Galilee, around the Kinneret and in Tzfat. What was the purpose of this ritual? First and foremost, like so many things, it places the Temple at the center of Jewish life, in Israel and in the Diaspora. The word has to go out from the Temple Mount and the fire spread from there to the Diaspora, before there can be a new month. In addition, many of our ancient neighbors had rituals that showed their reverence for fire. The massuot ritual transformed that awe into a way to serve God.

The system of eyewitnesses and signal fires proved to be too easy to sabotage by sects bent on challenging the rabbis’ authority, whether it was the Samaritans who lit their own competing fires or the Boethusians (Sadducees?) who had an interest in changing the date of the new moon to fit their own ideas of the calendar. At first messengers replaced the fires and ultimately the whole setup was abandoned for a fixed calendar. But the massuot live on in contemporary Israel in a number of ways. In the Jordan Valley, not far from the Sartava, is a community named Massua. There is also a Givat Massua in Jerusalem. More symbolically, one of Israel’s highest honors is given out every Independence Day. Twelve individuals (or partners) are chosen, one for each of the twelve tribes, and they take part in the state ceremony that begins Independence Day. After reciting a short speech they each light a torch, proclaiming that they light “for the glory of the State of Israel,” לתפארת מדינת ישראל! We may not have signal fires anymore but we still have pride in our land and our heritage. 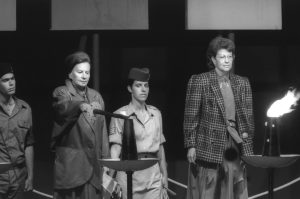