MISHNA: How is the mitzva of the willow branch fulfilled? There was a place below Jerusalem, and it was called Motza. They would descend there and gather willow branches [murbiyyot] from there. And they would then come and stand them upright at the sides of the altar, and the tops of the branches would be inclined over the top of the altar. They then sounded a tekia, a simple uninterrupted blast, sounded a terua, a broken sound and/or a series of short staccato blasts, and sounded another tekia. Each day they would circle the altar one time and say: “Lord, please save us. Lord, please grant us success” (Psalms 118:25) Rabbi Yehuda says that they would say: Ani vaho, please save us. And on that day, the seventh day of Sukkot, they would circle the altar seven times. At the time of their departure at the end of the Festival, what would they say? It is beautiful for you, altar; it is beautiful for you, altar. Rabbi Elazar said that they would say: To the Lord and to you, altar; to the Lord and to you, altar. (Sukkah 45a)

Where is Motza and why are the aravot (willows) brought from there? What is the meaning of this ceremony that seems to have been added by the rabbis to the basic requirement of the four species?

The arava is all about water. A willow tree needs a lot of water to survive and after the aravot are cut they have to be kept moist or they will dry up and die (hence the paper towel wrapped packages in many people’s refrigerators on Sukkot). Sukkot is the beginning of the rainy season and it is the time when we pray to have an abundance of water. The natural connection between the arava’s need for water and our own led to the development of the arava ceremony. Placing droopy willows around the altar and making a parade with them is a way of beseeching God for water and showing Him how helpless we are without it. As a way to make the ceremony even more public and significant, the rabbis added the element of bringing the aravot from Motza. 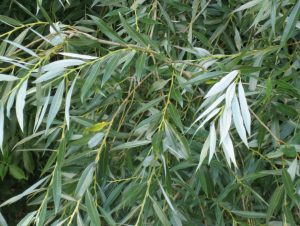 Motza is already mentioned in Tanakh as one of the places given to the tribe of Benjamin:

And the towns of the tribe of the Benjaminites, by its clans, were: Jericho, Beth-hoglah, Emek-keziz. . . Mizpeh, Chephirah, Mozah (Joshua 18)

We find seals from early Second Temple times in Jericho and Givon with the name Motza, showing us that there was a community there at that time. The name seems to come from the word source, i.e., a source of water. And indeed, there is an abundance of water around Motza, including the Motza spring and at least nine other (small) springs. The rabbis knew another name for Motza: Colonia. This Latin name was given post Second Temple times and according to Josephus it is because the Emperor Vespasian established a colony (Colonia) here for retired Roman soldiers. Rashi explains that a colonia is a place exempt from taxes and indeed the Gemara gives a legendary name derivation: Motza because it taken out of taxes.

It is significant that we know that Colonia and Motza are one and the same, because as often happens, the name stuck. The Crusaders called the place Colonie and the Arabs kept the name. So the Arab village Colonia, a few miles west of Jerusalem on the main road to the sea, is what we identify today as Motza.

Why did the rabbis bring the aravot for the Temple from Motza/Colonia? Dr. Avi Sasson, in an article for the journal Al Atar, has a number of suggestions. First and foremost, he points out that Motza is an ideal place to grow aravot. As mentioned above, there are ten springs within a one-kilometer radius (!). They drain into the Sorek Valley, creating an ideal habitat for the willow tree to grow. Motza is also on a main road to Jerusalem, making it easy to travel there and also adding to the public element of the ceremony. Because it is not in Jerusalem proper, the aravot would not all have been grabbed up by the pilgrims visiting and there would have been enough left for the altar.

Dr. Sasson adds another interesting idea. While on Sukkot we pray for rain, we are also thinking about natural springs, which support much of the agriculture called שלחין, irrigation. So bringing the aravot that grow from the natural springs is an additional element in our prayers for water, not only for rain but for the springs that are nourished by the rain. 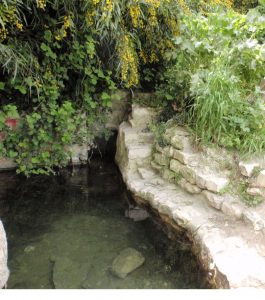 Colonia/Motza was excavated at various stages. Remains of a Roman bathhouse were discovered there, connecting it to the Roman colony. More recently, huge salvage excavations have taken place because of road construction. Two fascinating settlements were exposed. One was a very large village from the Neoltihic era (ten to five thousand BCE). It is the largest community from this time period discovered in Israel and includes houses, graves, tools and some beautiful ritual objects shaped like animals.

The other discovery connects us back to the Israelite beginnings of Motza. It is from the Iron Age (approximately ninth century BCE) and is a large temple, not so different from the Temple standing in Jerusalem at the time. There are those scholars who suggest that this WAS the main temple to God, but that does not have to be true. As we know both from archaeology and from the Tanakh, other temples coexisted with the monotheistic one in Jerusalem, to the distress of the prophets. 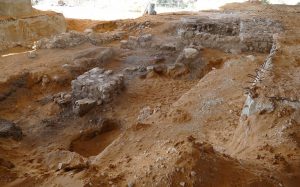 Motza also has a more modern story. In 1860 two brothers in law from the Old Yishuv in Jerusalem, Shaul Yehuda and Yehoshua Yellin, bought land here. They built a hostel for travelers and paid protection money to the local sheikh in Abu Ghosh who controlled the whole area. A few decades later Motza expanded and became a Jewish agricultural village. Its synagogue is still around but the community was tragically uprooted by the 1929 Arab riots. Survivors reestablished Motza up the hill, calling it Motza Illit. Today the area is a thriving place on the road to Jerusalem, with many trees competing with the willows for attention. 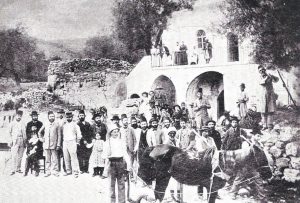