Ask anyone what bird is the symbol of peace or what beautiful creature is sometimes released at weddings and the answer will be a dove. Ask what bird is a dirty scrounging street dweller and the answer is likely to be a pigeon. But these birds are branches off the same tree, to mix our metaphors. Doves and pigeons are both members of the Columbidae family of birds; they have slight differences in their bodies but in most ways they are the same. Columba means swim in Greek and seems to refer to how the birds fly, with a swooping motion. The English word dove (as in diving) means the same thing. 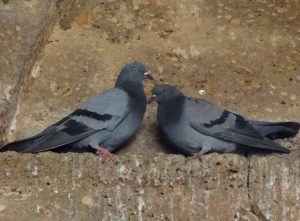 This exploration of bird categories is connected to Betzah 9 and 10.  The Mishnah discusses a ladder by a dovecote, a שובך, and how the birds have to be designated as dinner in order to be caught and slaughtered on Yom Tov:

MISHNA: “Beit Shammai say: One may not carry a ladder, which was used for reaching doves, from one dovecote to another. However, one tilts it from one window to another. And Beit Hillel permit” (Betzah 9a)

The Gemara goes on to discuss why moving the ladder was not permitted by Bet Shammai, but let us further explore the situation of the doves and where they lived . Doves and pigeons are already referred to in the Torah. We have the famous story of the יונה who is sent out by Noah to see if the flood waters have receded and who returns with an olive branch in her mouth. More prosaically, doves and pigeons were brought as sacrifices by people who could not afford to bring the larger animals (cows, sheep and goats).

If his offering to the LORD is a burnt offering of birds, he shall choose his offering from turtledoves or pigeons.” (VaYikra 1:14)

The Torah also uses two terms to refer to them: תור and בן יונה. Dr. Moshe Raanan explains that these terms correspond to dove and pigeon. The תור/dove is smaller, thinner and has shorter wings and a longer tail than the יונה/pigeon. 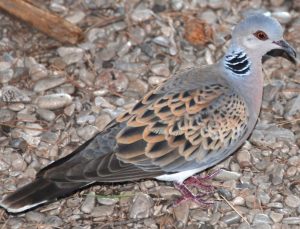 Nachmanides explains that these particular birds are chosen for a practical as well as a symbolic reason. Practically, they are raised by people and easy to find and bring as a sacrifice. On a metaphorical level, they are monogamous and do not leave their partner, a sign that Israel will not abandon God for other gods. This loving quality is perhaps the reason that the Song of Songs uses יונה as a term of endearment:

These qualities mentioned by the Nachmanides are indeed two main reasons why raising doves was wildly popular in ancient times. Once the birds find a mate and build a nest, they will always return to it. The female lays an egg and then the female and male take turns sitting on it for about twenty days. After twenty days, it hatches and the process begins again. Doves and pigeons live five to fifteen years so there is a really good return on your investment. Whether you gather the eggs or wait for the baby birds to hatch so that you can eat them, you have a constant source of food. Small birds are a particularly useful food source since one or two provide a meal for a family, In the days before refrigeration, you could only slaughter small animals unless you were expecting a large crowd, so cows and goats were saved for special occasions. Besides providing meals, pigeons were useful for what they left behind: their dung was a great source of fertilizer.

So if everyone was raising doves, where did they keep them? There were a number of possibilities. Our Mishnah talks about a שובך, a dovecote. These were tall structures (hence the ladder) that had spaces cut into them for individual nests. They could hold anywhere from ten to dozens of nests. An even larger type of structure was a מגדל, a tower. This was used for commercial purposes and could hold hundreds of nesting spaces. Both these structures have been used in our region until modern times. Their prevalence is attested to by the laws in the Mishnah about how they can be placed and how to prevent theft from one dovecote to another. For example: 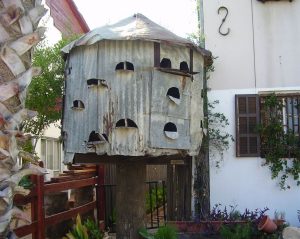 You could also raise your birds in an עליה, an attic. Here you just cut niches into your house so that the birds can nest there. In all these scenarios, once the structure is built and you have procured your doves, you are set. They go out and get their own food and raise their own young.

Another structure, visible today in many parts of Israel, is called a columbarium (from the scientific name for the dove and pigeon family, Columba). These are niches cut into rocks, usually the soft chalky rock of the Shephelah, the lowlands of Judah. They can be small, with a few dozen niches, or enormous like this one found in Bet Guvrin: 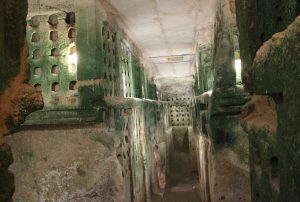 While not all scholars agree that these were used to raise pigeons, most do. Their presence indicates that raising these birds was as common as it seems in the Mishnah. A fascinating twist on the story is that sometimes these columbaria, built in caves and often underground, were converted into hideouts by the rebels of the Bar Kokhba Revolt in the second century CE. In the past fifty years many underground complexes with narrow entrances have been discovered in Judah as well as in the Galilee and the Judean Desert. They were used by the rebels to hide out from the Romans. Instead of starting from scratch, often they would take an existing underground structure: a cistern, a mikveh or a columbarium, and convert it into a hideout cave. 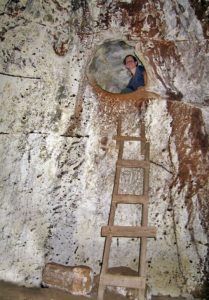 Entrance to a hideout cave (Wikipedia)

The lowly pigeon was as prevalent a sight in ancient Israel as it is today, perhaps even more so. But in ancient times it was much more functional as well as symbolic: love, loyalty and even Godly revelation were all connected to these birds. So the next time you see a pigeon, give it some respect!