Met Him on a Monday and My Heart Stood Still

Whether you know it or not, in your journey through the daf  Rashi is your best friend. Rashi (Rabbi Shlomo ben Yitzchak 1040-1105, France), who was on the scene long before Soncino, Artscroll and Koren, is the classic commentary and guide to the intricacies and confusions of the Gemara. He is the foundation upon which all Gemara study is built, including our podcasts and classes of today. So it is somewhat disconcerting to not have Rashi to (metaphorically) hold our hand as we begin this new tractate of Nedarim. The commentary printed on the side of the daf is called Rashi but most scholars agree that it was written by someone else and it lacks Rashi’s trademark brevity and ability to explain dense ideas quickly and simply. But alongside this “pseudo Rashi” we have another companion: the RaN. Let’s explore his story today. 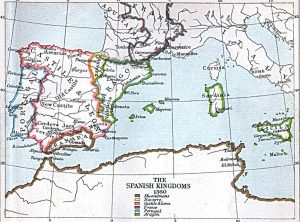 Spain in the fourteenth century (Wikipedia)

The RaN’s full name was Rabbenu Nissim ben Reuven Girondi (from Gerona, Spain). He lived in the turbulent 14th century (1315-1376 although we are not 100% sure about the exact dates). His family was from Cordoba, in southern Spain, they then moved to Gerona where he was born, and he lived out much of his life in Barcelona, becoming the de facto leader of the Spanish Jewish community. At the same time, he was a physician to the king, and in his spare time, he wrote monumental legal works, philosophy and our commentary to Nedarim. At one point he was imprisoned on false charges for five months. Among his students were the philosopher Rabbi Hasdai Crescas and the halakhist Rabbi Isaac ben Sheshet (the RIbaSH) who described his teacher as so great that others next to him are like a garlic peel or a sesame seed. 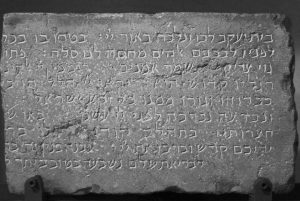 Rabbenu Nissim devoted much of his halachic writing to a commentary on Rabbi Isaac Alfasi (RIF), a North African writer who lived three hundred years before him and was the link between the Geonim, the early Babylonian Talmud scholars, and the Rishonim, the scholars of medieval times in Europe and the Muslim world. Besides his commentary to the RIF, Rabbenu Nissim answered queries from Jewish communities from all over the world, including from Tzfat in the Land of Israel. Unfortunately, most of those responsa have been lost. He wrote other commentaries besides the one for Nedarim; many are still in manuscript and have not been published. The Nedarim commentary gained fame because there were fewer resources to study this tractate. Rashi’s commentary, if it was written, was lost, and we have little else to help us. The RaN’s work fills that lack. 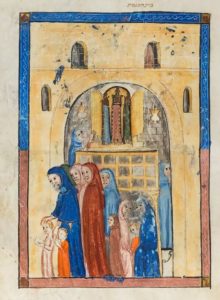 A synagogue depicted in the Sarajevo Haggadah, created in 14th century Barcelona (Wikipedia)

The fourteenth century was a terrible period in European Jewish history, and specifically in Spanish Jewish history. For centuries the Jews of Spain were spared much of the anti-Semitism that the Jews of the rest of Europe experienced. They served as important liaisons between the Muslim rulers of southern Spain and the Christian ones of the north. Jews occupied prominent positions in the economic, political and even military spheres of Spain and were deeply engaged with its culture. But as the Christians became more powerful, pushing out the Muslims, the Jews began to feel pressure as well. The horror of the expulsion from Spain in 1492 began with unrest, riots and anti-Semitism in the time of Rabbenu Nissim. Overarching these troubles was the horrific spread of the plague, the Black Death, which decimated populations all over Europe. The causes of the plague were not known and many attributed it to the Jewish population, accusing them of poisoning the wells. Riots, massacres and exile of Jews ensued throughout Europe.

In these tumultuous times, Rabbenu Nissim preached sermons besides answering halachic questions. These were collected into a book called Derashot HaRaN, the sermons of the Ran. In the tenth sermon, he mentions the plague. He explains that man’s natural inclination is to seek out pleasure and to focus on the short-term enjoyments of life and not the larger picture. Sometimes God requires us to make a “reset,” and to understand Who is in control and how we should behave:

“But we have been witness to the chastisements of our God for thirteen years now, a complete reversal of the natural order of things. For the evil [the Black Plague] descended in that year [1348] upon most of the inhabitants of the earth, bringing upon them unusual afflictions which it is impossible to attribute to the workings of nature. Every enlightened individual must acknowledge them as “the finger of God.” For the sicknesses common to man may be attributed to his nature, unlike strange, exotic illnesses, which must be regarded as the punishment of God to man in His constant surveillance of him.” (Derashot HaRaN, number 10)

Rabbenu Nissim explains that we should not look at those who suffered as being punished – that is not our job – but rather  see that a terrible situation like this must have come from God and is not the natural course of things. In such terrible circumstances we are able to see past our illusions of comfort and pleasure to understand the truly important things in life. As Rabbi Dr. Gidon Rothstein explains in an article about this derasha: “Difficult times help us see the world more clearly.” (Torahmusings.com)

What would the RaN have made of our pandemic woes and what might a 21st century sermon of his tell us? We do not know but perhaps the idea that such sublime writing could emerge even in terrible times can comfort us.